Sascha Vongehr
The US is supposedly the leader in terms of scientific output. However, there is supposedly also "a threat" of losing this position. To counter this, there are suggestions such as giving out more visas to foreign scientists and engineers. Even “don’t make Americans scientists, make scientists American” passes as valid argumentation.

I am reminded of attending seminars at a physics department of a US university, the “US professors” originating from Australia, Norway, Turkey, Japan, Germany, Poland, Great Britain, Russia, India, and Israel – I might have forgotten some - with a similar make-up of the attending graduate student body, and postdocs. Americans educated in the US? I remember few, and the circumstances were partially mysterious – “social engagement” can go a long way, so can being an athlete.

So this is scientific leadership then: Save money on educating your own population, which you keep at a bible thumping level for the required political system, and buy the best brains from all over the world.

Sure, that works, but does leadership not also according to US Judeo-Christian Anglo-Saxon culture imply something about being a role model to follow, for others to follow the lead? The US is not known for shying away from exporting its way of life. If the world followed this leadership, if all countries were to abandon proper science education and instead buy the brains from somewhere else, where would “somewhere else” be after one generation?

Of course, leadership can be understood as merely being the biggest bully already, for whatever historical reasons, and to keep exploiting the rest. Is this what is meant?

Bible, quran, L. Ron Hubbard’s writings - these are the world leadership in books - according to the numbers. They do not lead me. If you pick the right numbers, China is not yet the scientific leader. However, in Chinese physics departments, the people are almost all Chinese. Japanese kids know maths. I have reasons to believe that Asia is already the scientific leader.

Much of this discussion about keeping the scientific leadership position is driven by fear and patriotism. What is so scary about China being the leader in scientific output? Identification of science with military might? Or simply keeping science from yellow people? More US visas to foreign scientists and engineers however means that yellow people turn good on holy land.

History, with all its distorted lessons, cannot teach much except for a few general insights about that some “leadership” leads nowhere, some down a path we should not follow. White “leadership” has failed the world; it is hardly possible that yellow can perform worse. 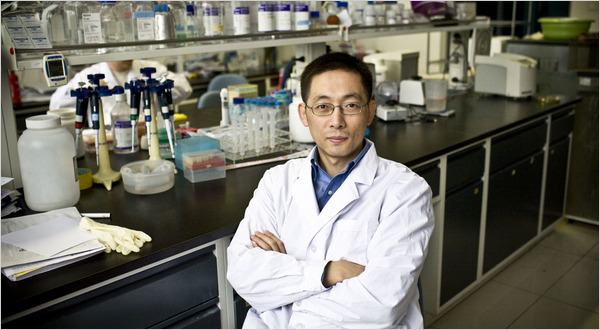