Sascha Vongehr
Today (and the next time in this series on duality), I explain the most interesting insight that I have gotten from string theory about black holes.

String theory may not be the correct theory of quantum gravity, nor has it modeled any usual black holes yet. Nevertheless, I will neglect these issues and concentrate on the core insight, which is here illustrated best with string theory, although it is not dependent on it. The core insight is one about duality and very similar to what I introduced there. It is less general but very intuitive. I recommend carefully considering this picture, as it makes many knotty questions about duality, general relativity, black holes and so on obsolete.

Duality tells us that nature itself has not got a certain number of dimensions and suchlike, because the ultimate theory may have several mutually dual descriptions that each use different numbers of dimensions.

The usual description of falling into a so called Schwarzschild black hole of general relativity is as follows: You are attracted by the black hole and pass through the event horizon, after which you cannot possibly escape anymore, and this means that you will get closer and closer to a so called space-time singularity, in whose presence you will be destroyed. Near the singularity, gravity will pull very differently on different locations in your body. 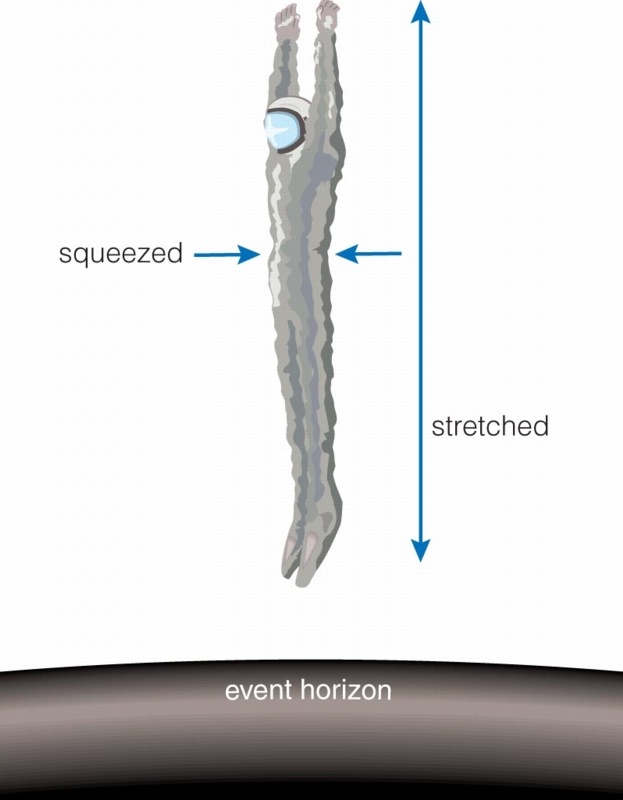 It will pull you apart and at some point even strip the electrons out of your atoms, and so on. Remember, this is the very basics and you need to look elsewhere for more technical descriptions. It is of course much more involved than I write it here. For example, the singularity is not in the middle of the black hole, but always in the future, and so on. But today, the simple description suffices; we do not need to concern us with the details.

The important fact to remember: If the black hole is large enough, you do not feel uncomfortable at all falling into the black hole. Falling into the black hole is defined by passing the event horizon, the point of no return, where the velocity you would need in order to escape is larger than the velocity of light. You are trapped, but as long as you do not try to escape, you may not notice anything unusual for quite a while. For example, the black hole Sagittarius A* in the center of our galaxy is about a million times more massive than the sun. After passing its event horizon, an object would have up to maximally 20.05 seconds (my own calculation) before being destroyed by the singularity. The exact time depends on the initial velocity outside of the black hole. There are super massive black holes that are another thousand times more massive, and when falling into those, general relativity predicts that one may live for a whole day inside the black hole before noticing any discomfort.

You have hit the event horizon, but what do you feel? Nothing unusual! In fact, the holographic description of the universe is two dimensional anyways. You have been two dimensional before, namely as described on the outside boundary around the universe,

and now you are still two dimensional on the surface of the black hole, too. Again, the descriptions are dual, i.e. absolutely indistinguishable to the observer, and so the observer feels again nothing unusual at all while its strings crash against the event horizon with the speed of light.

So, here we have dual descriptions again. They are totally different yet also the exact equivalent in terms of predicted observations. They are not just relative to different observers, like inside and outside of the black hole. We have here only one observer! As I wrote already about the whole universe: “There is no difference between the descriptions. Being on the surface or being inside, these totally different situations are the exact same situation!”

Straw-man: “Fine, but even if the observations of the observer at the event horizon are the same, surely, once she hits the singularity, she knows the difference!”

Yes, and because this is yet another great insight, namely that event horizon and singularity are both in the dual models although the dual ones have no singularity, that’s why I will discuss the singularity separately the next time.

Comments to the previous post in this series taught me that confusion about the following point may be quite common: As observed from the outside, the person falling into the black hole seems to be stuck on the event horizon, which is because of time dilation and red shift relative to the outside observer. This is a different issue and it is not the same or even closely related to what I described above. I described what the one who falls into the black hole observes. Another observer outside of the black hole will never even observe the falling person reaching the event horizon.