Johannes Koelman
Is energy conserved? "Of course it is!" anyone with just a rudimentary knowledge of physics will answer. A more pertinent answer would be: "if you can't show me a working perpetual motion machine, shut up and stop wasting my time!"

The conservation of energy is an insight that stood the test of time. It was Julius von Mayer who first worded it in its clearest form: "Energy can be neither created nor destroyed". That was nearly 170 years ago.

So why question energy conservation?

The interesting thing about physics is that the deeper you dig, the more you are forced to doubt existing principles. Dig deep into the universe, allow gravity to become a dominant feature, and the conservation of energy becomes much less obvious.

Recently, several physics bloggers have tackled the issue of how energy conservation plays out at cosmic scales. You might be surprised to hear that they all seem to conclude that at cosmic scales, total energy can be created and destroyed. Sean Carroll at Cosmic Variance comes to the conclusion:

"it’s better to [..] just admit that energy is not conserved"

Sascha Vongehr here at Science 2.0 does not agree with Sean's particular wording, but reaches the same conclusion:

"Energy conservation just does not hold in general relativity"

I think they are both wrong. Energy is conserved also at cosmic scales, but one has to look at it from the right perspective. Trying to define the total energy of the universe in the conventional way in terms of a volumetric addition gets you quickly in all kinds of difficulties. The total energy can not be defined as the sum of energies of many small subvolumes. Key to this problem is that there is no such thing as 'the density of gravitational energy'. Gravitational energy is non-local. Or more precisely: it is holographic in nature.

To get a handle on the holographic nature of gravitational energy, we first need to understand the concept of space-time horizons.


From black hole horizons to cosmic horizons
In a recent post I elaborated on what could be referred to as a Bohr model of black holes. The picture that emerged is the following:

The right-hand side, the horizon circumference divided by 4pi, we will refer to as the horizon half-radius, or HHR. 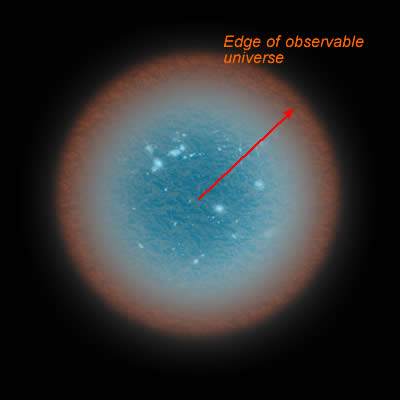 A cosmological horizon bounds the universe observable to us. The closer an object is to this horizon, the more red-shifted it will be.

Another way of expressing this is by saying that the cosmic horizon is a black hole horizon turned inside-out. Some prefer to refer to such a horizon as a white hole horizon. This all becomes rather vague and suggestive wordplay. For the present purpose you should just accept the fact that the cosmic horizon that we observe 'from the inside' and black hole horizons that we observe 'from the outside' carry opposite signs when it comes to determining their energy.

With this, all cosmic-scale energy conservation issues have all evaporated. It is the energy associated with the cosmological horizon that fixes the bookkeeping of the total cosmic energy. We have already determined the size of the HHR of the universe, so we know the energy of the associated horizon:

The total mass in the observable universe (including non-luminiferous matter) is about 2x1053 kg or 1061 Plancks. So the total energy of the universe adds up to

Credits and debits add up to zero. That is how it was at the very start, and that is how it is now. Our cosmos has its bookkeeping in perfect balance.


Expanding baby universes
The fact that the total energy is not just conserved, but more specifically conserved such that it adds up to zero, is essential when considering the origin of the universe. The universe was born in an infinite flash of light. And it will probably also end in a flash of light. Can we model this evolution based on the above derived horizon description? The answer is "yes", and it is surprisingly easy to do.

We don't have a theory that describes Planck-scale physics, but we can make an educated guess on some key aspects of the big bang by audaciously extrapolating the above horizon description to the Planck scale origin of the universe.

The universe started hot. Imagine an infinite space filled homogeneously with ultra-hot thermal radiation. Infinitely many photons with energy close to the Planck energy. Our early universe constituted a tiny fraction of this infinite space. How tiny? We extrapolate back to a universe containing just a few (say three) photons and a total energy content of one Planck. For this baby universe to have sprung out of nothing without violating total energy conservation, it must have a vanishing total energy and therefore an HHR of one balancing the energy content of one Planck. Only a very tiny three photon universe fits into such a half radius. Notice that another observer at a slightly different location in the infinity of space experiences an entirely different universe, also containing just a few photons. Each of these infinite number of baby universes has total energy zero.

The all-too-familiar expanding balloon analogy explaining cosmological redshift: radiation stretches to larger wavelengths due to the expansion of the universe.

Let's recap what we did. We introduced the concept of a horizon energy, a quantity proportional to the circumference of the horizon. With nothing more than this and the law of total energy conservation, we described the Hubble expansion including the redshift of the big bang photons.

Well, I have to admit that I have somewhat reverse-engineered the above derivation. Would I have started with baby universes containing different numbers of photons, or photons at different energy, things would have worked out less precise. Key point, however, is that using a simple horizon energy picture, one can understand the energy balance that leads to zero total energy, and also grasp the expansion of a radiation-dominated universe. The same horizon picture can be used to also derive the expansion of a matter-dominated universe (the size of which increases with the 3/2th power of the expansion factor).

So when asked "is it possible to build a perpetual motion machine that generates energy?" you know what to answer. You reply: "Such a machine would perhaps be possible, but only if you are able to extend it beyond the cosmic horizon." An answer that will leave them in utter confusion and probably shut them up. If they are witty enough to ask the follow-up question "how far away is that horizon?", you reply "not that far actually, the square root of that distance is roughly the wavelength of the light from the big bang, and that's about a millimeter". Never destroy their hope.
The hammock physicist
More Articles All Articles
About