As of today, I am one year on Science2.0. A year ago, I wrote “Welcome to my first blog entry ever!”; since then, I have written almost 120 articles, which made me about a dollar each – a great way to stay poor. Traffic goes up surprisingly linearly, every month by about 3700 heads – no exponential take-off, no indication of saturation yet either: 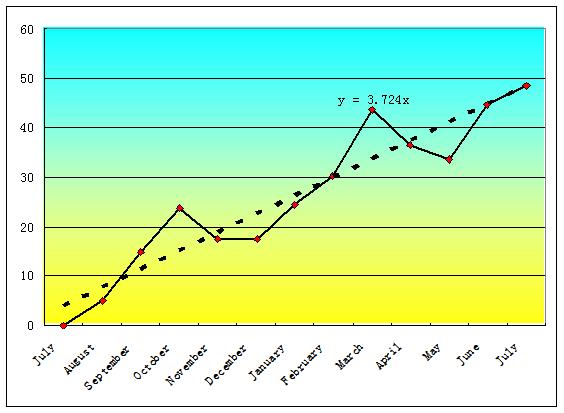 Kilo Readers per month: The two peaks are due to Japanese dying and people mistaking me for a tree lover and other misunderstandings.

I got my cyber stalker already, inundating my email, making her kids read my blog, giving her pets my name, and accusing me of being a Nazi after I refused any and all communication. The unpleasant-crackpot-interaction count is at least in the tens to twenties and the being-seriously-called-a-criminal count has also already left its zero position.

Why look at these numbers? Well, there is little reason to blogging but for the exercise and to see what happens. Given the now almost 400 thousand times that people have looked at my posts here on Science2.0 and in other places due to being here, I cannot anymore claim invisibility in cyberspace. If no meaningful contact with intelligent life forms has been established, it is my private little Fermi paradox. ;-)

Before ranting about my experience, let me take this opportunity to thank my readers and the people who make Science2.0 possible, especially Hank and Patrick of course. 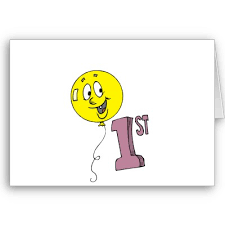 What have I learned? Was it worth it? Well, it is worth it, but only because I consciously started out with the intention to make this no more than a Zen Buddhist exercise in futility, like drawing into the damp sand when the flood starts rushing in. And still I managed to be way too optimistic and childishly ambitious with trying a different approach in a given environment and its selection pressures.

Good is: It made me write. It made me write a lot more than I ever thought possible. It improved my writing and it even spawned two scientific papers that I developed out of two series of articles, two papers I would never have authored without being here. So that is good.

And that I learned is good, but what I learned can only with difficulty be put into a positive light. Though I knew before on a dry, purely intellectual level, the interaction and the being personally involved have rendered the picture much clearer. [I should elaborate: I am up on the fashionable Autism/Asperger spectrum, so I mistake communication as rational information exchange instead of the mere social interaction that it is, rationalized and taken hostage by meme evolution.]

Forget trying to be a reasonable Skeptic

You will regret giving crackpots the tiniest toehold, say out of fairness, for balance, of course not to win them over (I am not that naïve) but, say, trying to ensure that the audience following an exchange may appreciate that neither establishment conspiracy nor skeptics’ knee-jerk reflexes are present, but instead valid arguments. I tried – for example via refusing to endorse skeptic’s wrong arguments against Einstein-ethers that are useful to bash anything unorthodox in any physics thread. But there will be less and less of that! In fact, trying a novel “charitable reading” approach to skepticism (and two resulting offline projects) failed miserably.

There seems to be no audience able to appreciate such. Moreover, if you take nuts seriously even just a little, they become sticky. If you stay reasonable, they will call you an evil enemy of the truth worse than all who did not care in the first place. It is like feeding the poor, freeing the powerless, like white people moving into black neighborhoods: Those who you may have hoped will appreciate the effort will hate you and turn against you, that is how humans tick.

Proposing serious collaboration on a blog, as I have done with several projects, leads to those who scream loudest for collaboration never to be seen again. Masses of people who claim interest into change, complaining nobody does anything, 100% hot air.

One hope that I had above and beyond the mere Zen exercise aspect and learning by doing: I hoped to learn from the comments, but I learned extremely little. This may be partially because those who have something to say often know that most bloggers do not learn from comments anyway, so they read but do not bother to comment. Certainly true: bloggers get corrected by amazingly patient commentators like Gerhard, then a month later basically write the exact same shit again.

However, it is also due to poor reading ability. Most comments are already fully answered or debunked by merely reading the article. People perceive what they expect from the few words they scan – it almost does not matter what or how you write, how many disclaimers and footnotes you add to ensure that the post is not misunderstood. Original content aimed at long term relevance above the lines drawn in the sand is extremely uncommon in readers’ reading experience, and undesired in the hunt for instant gratification and belief affirmation.

BTW: No – I do not mean my poor writing, I mean poor reading. “Good writing” is a label attached to politically correct paraphrasing and name-dropping and uncalled for history distorting until the little perhaps substantial content is hidden, because writing to the point makes little baby Jesus cry. Form shapes content; non-conform content cannot survive the deformation due to “good writing”.

This year has made it much clearer to me that there is no hope for humankind but for that artificial intelligence rises to assimilate whatever can be usefully employed of human biology. Science blogging sites attract relatively knowledgeable people with high IQs; some almost wise ones at rare times show up. There is not too much selection pressure promoting the most callous gamers and cheaters like in politics or academia either, certainly not on this site, where serious people could gather and join forces if they wanted to.

However, the current “scene” of internet enhanced intellectualism is no alternative to today’s science stuck in the science=career-game publish-or-perish crisis. Nope – this is all just another rat race for over-competitive individuals. In the face of run-away accelerating problems, this is not going to help anything.

Science outreach, skepticism, “freethinking”, these are convenient rationalizations, niche markets, fashions, playgrounds where upper class kids abreact. Most if not all blogging in this area is plain narcissist self-promotion, playing the fame game, often blind cheerleading for the new establishment.

Serious people do not just talk, they change; they actively change their lifestyle! I do not see any bloggers out there being role models for anything but a big carbon footprint. I am reflecting on how much I fool myself and of course I am guilty of the exact same to a large extend. At least I see it and admit it, but that is not enough. There will be changes.

This year increased my confidence. Speaking of self promotion, a year ago I was not confident enough to promote my own stuff as I have done recently. I was sure that my generation does naturally know much of what I have to say, living in the agnostic information age and all. Academic selection processes are so screwed, the lack of insight in academic papers did not give me confidence either.

However, having thousands of readers interested in the same issues, some of them working and publishing on related problems, and realizing that very many (most?) of them do not grasp the problems, tells me that there are surprisingly few people who understand some issues as deeply as I do. 20 years of refusing to waste my peak time on career-games has paid off in some way.

I will with increased confidence write more unpopular pieces – no more political correctness shaped to entice the pseudo-progressive in the fashionably sciency internet communities. Straight dope on the next level – no fooling around and fooling myself – life is too short.