The cat is possibly the cruelest hunter, and like with so many bad things, humans are to blame for turning something naturally not so good (Natural Born Killers) much worse. Some deluded apologists, most of them female and overweight, hold that even with ever more house cats hunting to escape boredom, there would be a natural equilibrium if we just let feral cats run wild. This is ridiculous, because natural cats such as lions hunt as little as possible. Every hunt risks injury. An animal cannot hunt efficiently if it is injured. Every unnecessary hunt increases the chance of the predator's death.

Often even a mild injury spells death to a leopard. Wild animals did not evolve under the option to go home and recover with spoon fed tuna/chicken gourmet. Evolutionary selection pressure makes wild cats relatively reserved and “humane” hunters (not to be confused with inhumane human hunters). Humans domesticated the cat in such a way that this beast not only lost that particular selection pressure against unnecessary hunting. It became a torture-for-fun killing machine.

Particularly farming, which actually also made the human’s life diseased and miserable compared to that of hunter-gatherers, evolved an unnatural killing instinct via artificial selection pressure: The cat that caught the most animals and brought them to the farmer instead of eating the catch was bred into the next generation. The monster called barn-cat arose. It was also kept on long distance sailing ships to keep rats in check, then jumped ship and destroyed the wildlife of many an island, much of Australia even, helped by the equally foreign and cute bunny to conquer the whole continent.

The idiocy of human primates has lead to house-cats – quite a misnomer – being everywhere. Even well fed ones and basically all of them go out and hunt (yes, yours too, even if “tubby” is yet further deprived and doesn’t bother showing you the carcasses anymore). Rabbits, rare sing birds, and for many endangered species like eagles important prey animals, especially rodents; a single cat may kill easily up to two or three animals a day, or shall we say night, as they are also nocturnal hunters. UK assessments indicate that cats may kill 64.8 million birds each year. 30% of house sparrow mortality is linked to the domestic cat. In the recovery of ringed robins and dunnocks, it was also concluded that 31% of deaths were a result of cat predation. (Source: Impact on prey species)

House cats mostly just eat part of the head of a captured animal; often they merely torture the victim and then leave it to die. Animal hospitals receive cat attack victims often and the survival rate is only about 20%. The problem: Cats are dirty. Although they have no specific poison in their saliva, their bite is deadly on account of the bacteria in a cat’s mouth. Cats lick themselves “clean” and bite many other animals every week. Their own immune system is evolved for this, but that of a bunny – not so much.

Failure to control the pest by spaying and neutering (which may leave your pet depressed) and the added population from abandoned household pets has resulted in large numbers of feral cats; up to 60 million in the US alone, tendency rising. Every day there are two to three cats born for every single human child in the US.

As the cat pest is growing, Aborigines living in the Australian outback have now re-discovered a simple and cost effective method: Cats are delicious when cooked slowly!

Cats are dirty animals, so you have to watch out when catching them (a bite needs immediate attention or tetanus may kill you), and you should cook them all the way through after preparing them carefully: All the innards should be discarded. The liver is too toxic for human consumption.

Eating cat is a most humane option on the meat menu: Battery chickens, factory farmed broiler-house turkeys, cattle with insufficient room on concrete craving ion because farmers want their meat white, lactating sows immobilized in crush cages, veal calves raised in sunless factory farms, transported in crowded trucks across several countries in baking heat without being fed, watered or rested to a distant slaughterhouse where they are often not properly stunned before cut open alive; none of this with cats that had a happy life killing birds. Just make sure to kill them fast and painless, say by decapitation with a heavy axe while having them well wrapped in some sort of cloth and being as nice to them as possible. There would be better methods still, but since humans are stupid idiots, societies do not allow access to such means - in fact, even many animal hospitals still use CO2 to kill cats, a most horrible way to go, utter panic - you can see it from the tails being expanded to the maximum - DO NOT LET YOUR PET BE KILLED THAT WAY! (Rather bring it home and take an axe!)

As pointed out by one of the few helpful sites:

On a "libertarian" medium like the Internet, there is no end of sites dedicated to the construction of homemade bombs and weapons of mass destruction. However, a quick check on any search engine will uncover a striking lack of quality cat eating advice available in English. … for whatever reason - rioting, pestilence, famine, or just plain curiosity - you will need to eat a cat. Your very survival may depend on this handy guide.

True – even their links are mostly dead, taken off the net under pressure I presume. Chefs have been kicked out of television shows and websites been sued for recommending certain beer brands to cook with cat meat (So, dear most famous Irish beer company – I will never drink your stupid beer again – is anyway pee compared to German stout). In June 2008, a group of students from the Danish School of Journalism in Århus had their accounts closed by Facebook after uploading photos of themselves cooking and eating a cat that had been already killed by a farmer. That is the “free world” and progressive internet for you (boycott Facebook if you support democracy! I have never been on FB or twitter or any such anti free speech sites!).

As said, cat is delicious, as proven by the rise in demand for cat, and the willingness of some to pay extravagant prices for cat dishes. [Do not eat cats in restaurants though, as that supports the cruelty of underground meat markets, especially the storage and transporting of many cats stuffed into narrow wire cages over very long times.] "Dragon Fights Tiger'' (龙虎斗 longhudou) is made with snake (the “dragon”) and cat (the “tiger”) stir-fried together. Arranged on a plate they either fight from left and right over a round pellet made from eggs or it can at times be a roasted snake entwined around a roasted cat. "Dragon-Tiger-Phoenix Soup" contains snake, cat, and chicken (the “phoenix”).

Longhudou soup: Guangzhou city banned the sale of snake dishes in the wake of SARS in 2003, because snakes may have spread the virus and snakes are also useful animals that should not be taken from the wild. Against much misinformation, this ban was not about cats.

However, snake meat is often too tough while even an old cat can be soft if well prepared. So lets get down to the meat and explain how to prepare a cat properly.

How to prepare Cat

No animal deserves to suffer (except perhaps human apes - they are intelligent enough to know that they cause suffering). Do not think that killing an animal by hitting its head is humane. Animals do not have close to as fragile brains as humans! Ever tried knocking out a dog? So, make sure you know how to kill properly (see above), or don't.

Get a large cutting board and lay out the dead cat. Chop off the head (if you have not already done so), tail and feet; they have little usable meat. Grab the loose skin around the neck and perhaps using a pair of pliers or maybe cutting at times with scissors, peel it back off the carcass like you would with banana peel or a used condom, rolling it off the body. 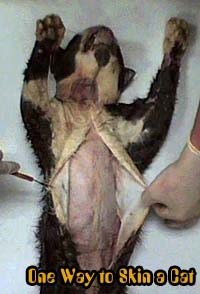 NOT the best way to skin a cat.

Next, make a longitudinal incision on the cat's abdomen. Reach into the body cavity and remove all of the internal organs. Again: Discard them, especially the liver, as it is toxic. Wash the meat.

Best soak the meat 24 hours in saltwater to tenderize it. The latter step and the predominance of alcohol and acidic ingredients as well as slow cooking in cat recipes are due to that even house cats are naturally quite wild (meat wise) and “dirty” – they are tough if not tenderized and the alcohol may also help disinfecting.

Dice meat into small cubes and soak in sherry to flavor it. Simmer lentils for 40 minutes and add the cat meat along with the ginger and lemon juice. Allow to simmer for at least one more hour.

Ingredients: 1 cat cut into roast, 1 can of cream of mushroom soup, 1 clove of garlic, 1 stout.

Cover and soak in beer for 6 hours. Drain and place in pot with mushroom soup. Add a clove of garlic. Slow cook for six hours or bake at 350 degrees for 2-3 hours in a conventional oven. According to several reports, this is “fantastic served with mashed potatoes, collard greens, and fresh, homemade egg rolls.”

Again: Do not eat cats in restaurants, as that supports the cruelty of underground meat markets, especially the storage and transporting of many cats stuffed into narrow wire cages.