News Staff
Archaeological sites speak about the everyday lives of people in other times. Yet knowing how to interpret this reality does not tend to be straightforward. We know that Palaeolithic societies lived on hunting and gathering, but the bones found in prehistoric settlements are not always the food leftovers of the societies that lived in them. Or they are not exclusively that.

Peoples of this type were nomads and used to be constantly on the move across the territory, so other predators, such as hyenas or wolves, lurking around in search of food remains left by humans would be a common occurrence. Or even at a specific moment, carnivores could have sheltered in a cave abandoned by Prehistoric peoples and there raise their puppies and bring in the bones of the animals caught to feed them.

These predators used to bite the bones leaving their teeth marks on them.

So it is very difficult to identify, for example, a roasted shoulder of mouflon eaten several thousand years ago from a few bone fragments that remain of it today. To be able to identify cases like this one, a novel way is to analyse the marks that we humans leave on bones when eating meat today. Human beings not only alter the bones when using stone knives on them and exposing them to fire to cook them, but like other animals, we also leave bite marks on the surface of the bone when we remove the meat to feed ourselves. 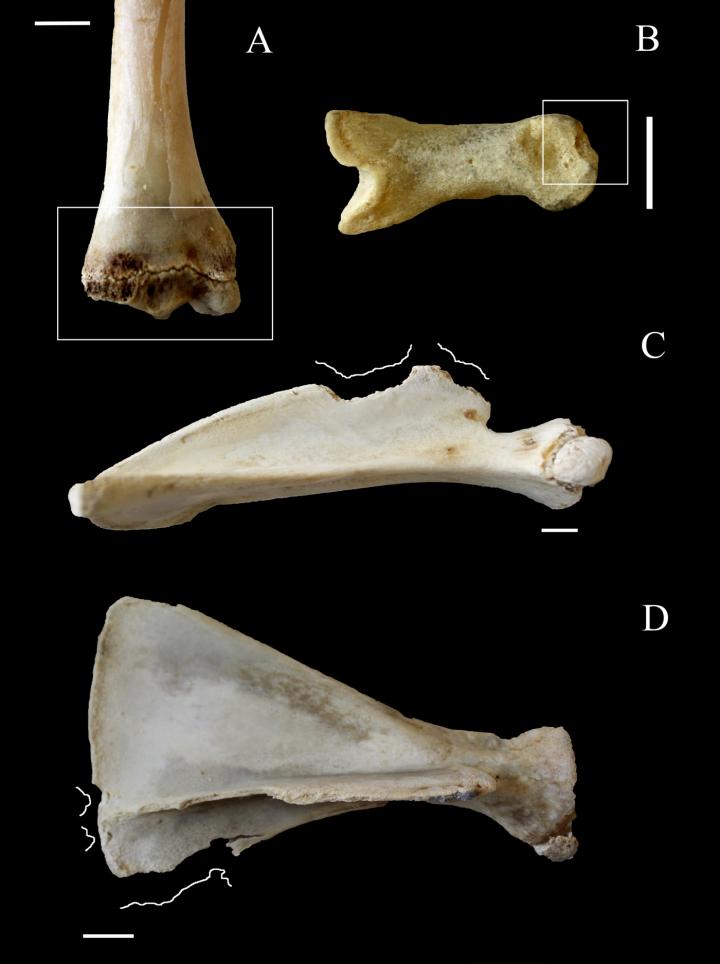 Marks produced by humans when eating meat in the experiment carried out in this research. Credit: Antonio J. Romero / UPV/EHU

In this respect, the researcher at the UPV/EHU's Department of Geography, Prehistory and Archaeology of the Faculty of Arts Antonio J. Romero has led a piece of experimental research in which ninety lamb bones --phalanges, radii and scapulae-- were studied and the meat of which was consumed by ten volunteers using only hands and teeth. To control the variables resulting from the processing of the food beforehand, a third of the sample was eaten raw, another third roasted and the rest boiled.

What did they eat and how?

The results, published in the Journal of Archaeological Science: Reports, show that over half of the bones bore the marks of human bites, teeth marks as well as fractures caused by chewing. These marks, analysed under a binocular magnifying glass have a set of characteristics (size and morphology) that allows them to be differentiated from those produced by other animals. Furthermore, as the researcher explained, "although the men produced more marks than the women, according to these data, it is not possible as yet to differentiate between them." On the other hand, cooking the meat beforehand affects the appearance of marks: "the teeth marks tend to appear more regularly in the roasted or boiled specimens," pointed out the researcher, "while the damage on the tips, edges and crushing tends to be more usual in the bones eaten raw".

"There are various similar studies that have explored in depth the damage caused by animals on bones when feeding, but not dealing with the marks that we humans leave behind," explained Antonio Romero. Studies of this type have a clear application in the analysis of archaeological remains, in particular for historical eras. So in each case a whole set of characteristics is studied, such as the location of the damage left on the bones, its morphology and dimensions, which is not always easy to apply to the archaeological record, but "together with other prints of human activity that are more reliable, such as the marks of stone knives, etc., it is possible to complete the interpretation," he insisted. This research constitutes a real breakthrough in the possibility of finding out what kind of meat foods hominids consumed and in what circumstances (whether or not they cooked the meat before they ate it). "It allows us to find out more about human beings in the past and the origin of our modern behaviour, about the way we process foods (cooking them or not) and about our way of eating," he concluded.