“I am going Nuts” introduced a misunderstood gem, the Nutmeg, and mentioned the problem of the nuts being very diverse, as you can see in the picture below, and thus a little difficult to dose. One solution is to produce liquor, or in other words, perform an extraction. 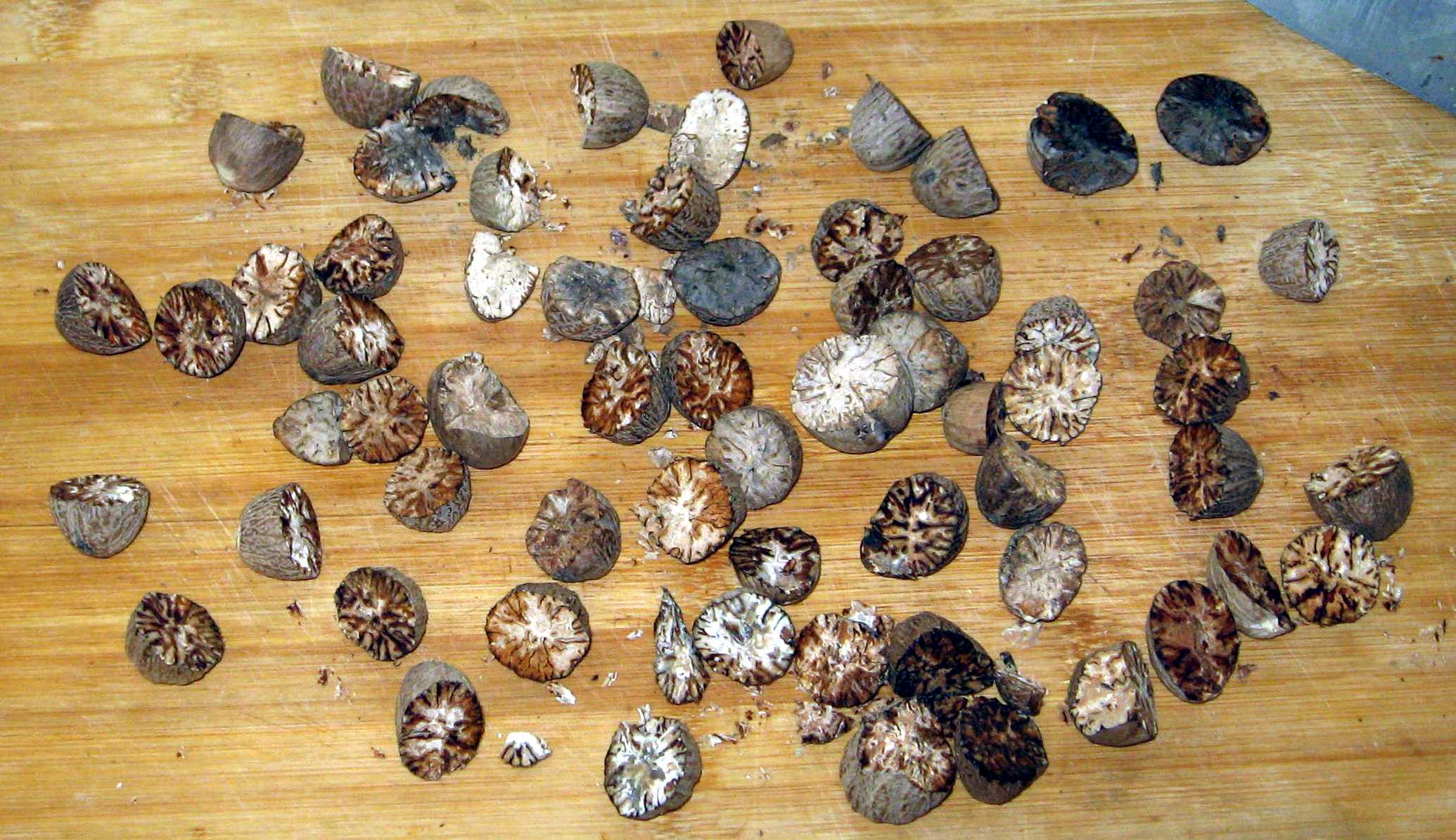 Halved nutmeg nuts: Size, oil content, and so on, differ a lot between nuts. Also notice the very black, gray and extremely white nuts, who seem to have different kinds of fungi attacking them. The nuts look pretty much the same from the outside!

Pure myristicine without safrole, elemicin, and very likely unknown molecules inside nutmeg, does not result in the same and medically useful effects of nutmeg. It seems however that the active compounds all solve readily in alcohol, so an extraction with pure alcohol is possible.

The above picture showed about 200 grams (ca. 30 nuts) of older, larger nutmeg nuts. They are all so diverse that it will be much better to make liquor out of them rather than trying to guess how much to use with the usual method. Also, it may not be a good idea to eat those fungi alive.

The nuts are halved and quartered and then further shredded, all done with a large knife. Again, hold firm and cut rather than chop, else they will ‘go projectile’. Cutting 50 or 100 nuts as fine as the single one the last time around will of course be too much work. Instead, squeeze the larger pieces hard with a rock early on, using your weight to push down onto the cutting board. It will look like this afterward – half of the pile already went into a soy-milk maker: 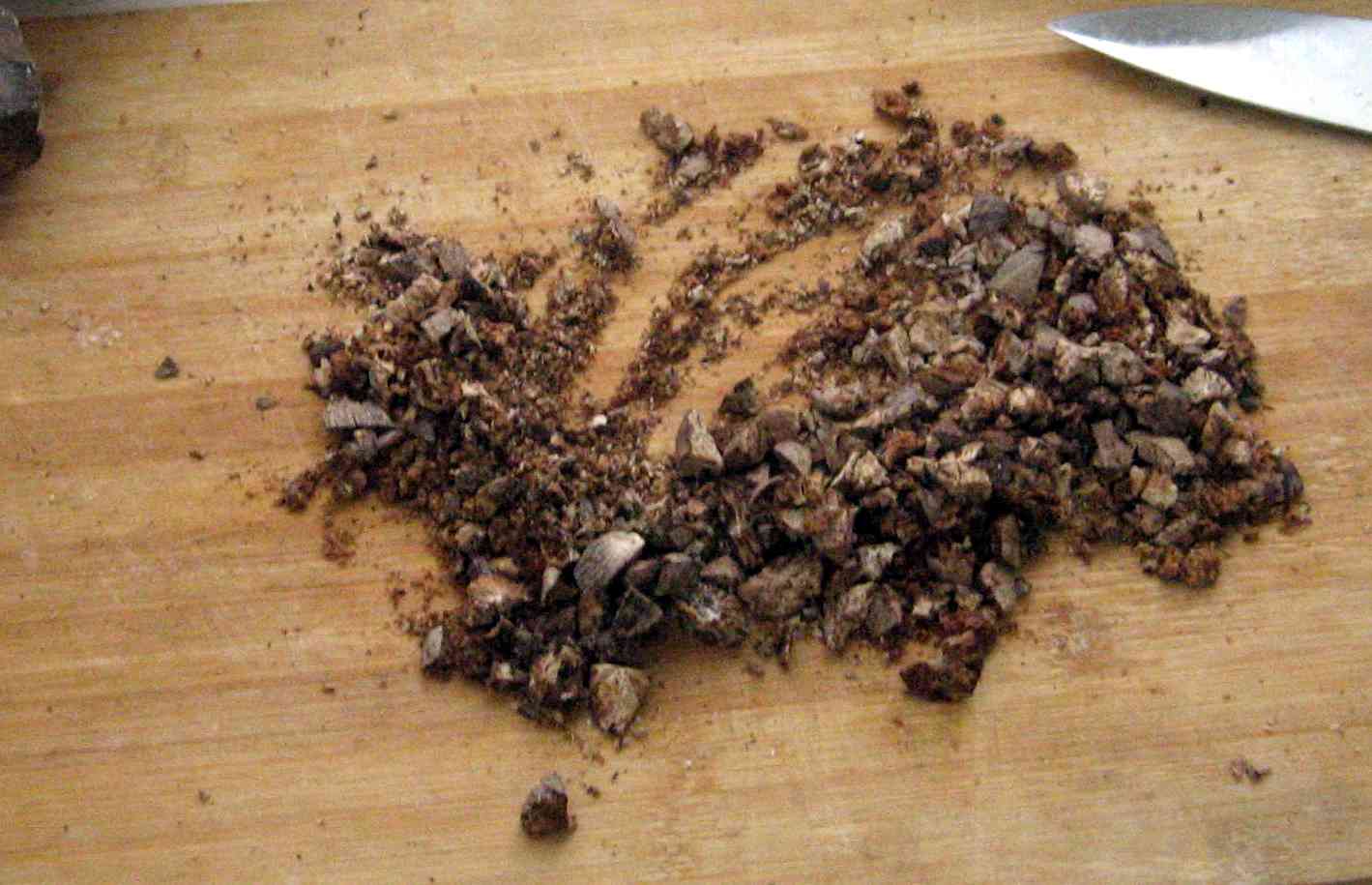 What you see next may as well be a coffee grinder and some fine tea sieves or any equivalent you come up with. I use a chopper/soybean milk maker combination. On the left is the mere grinder attached. You see it while chopping a third of the nutmegs small. A good chopper may be able to handle the full nuts all at once, but this cheap piece of something sure does not. 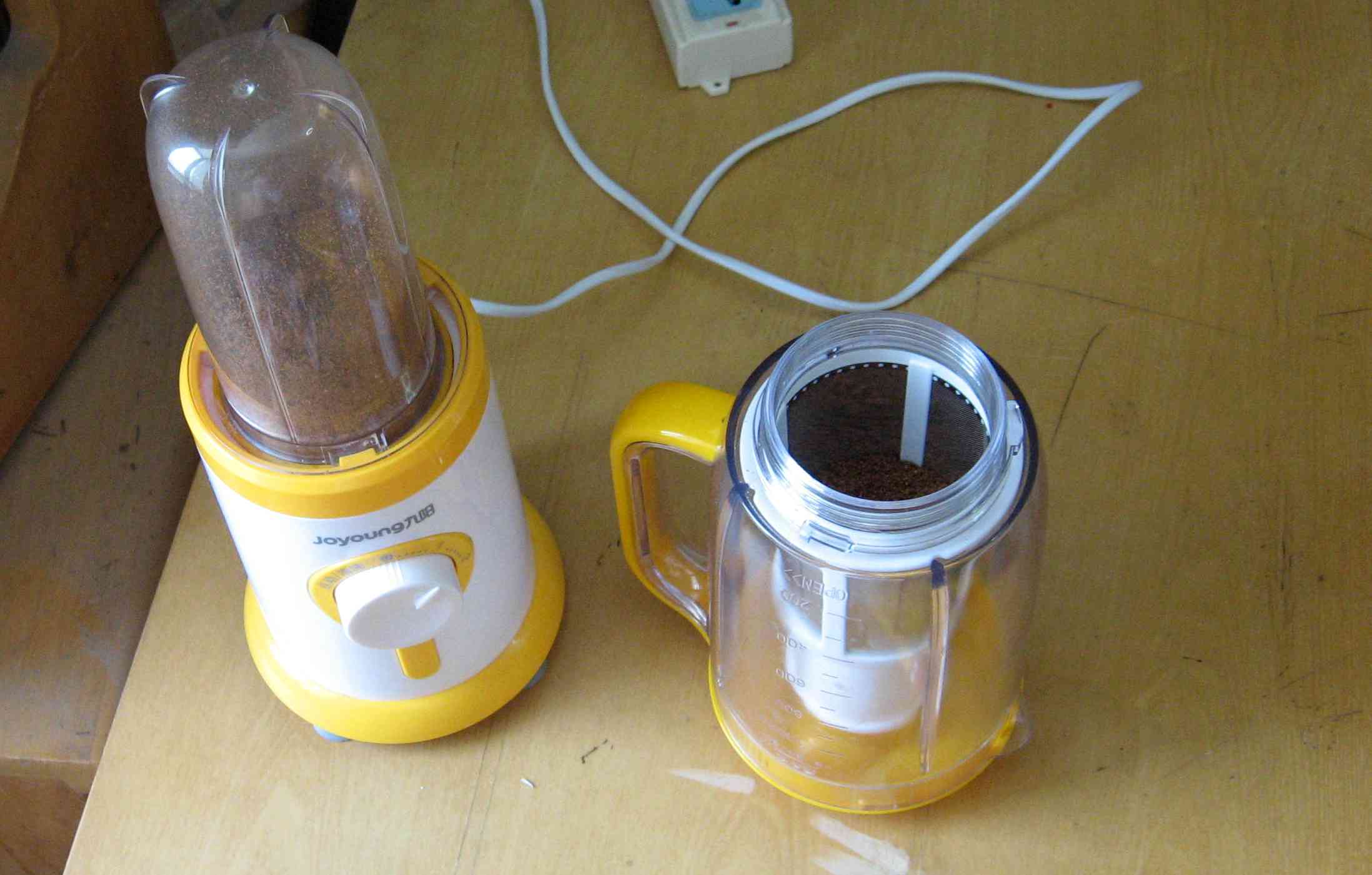 To the right you see the inverted soy-milk maker attachment, which has a fine tea sieve visible in the inside. The ground powder is packed into the inside of the tubular sieve. Once all is inside, the rotating knife is taken from the other receptacle and attached to the top, the thing is inverted and it looks as follows: 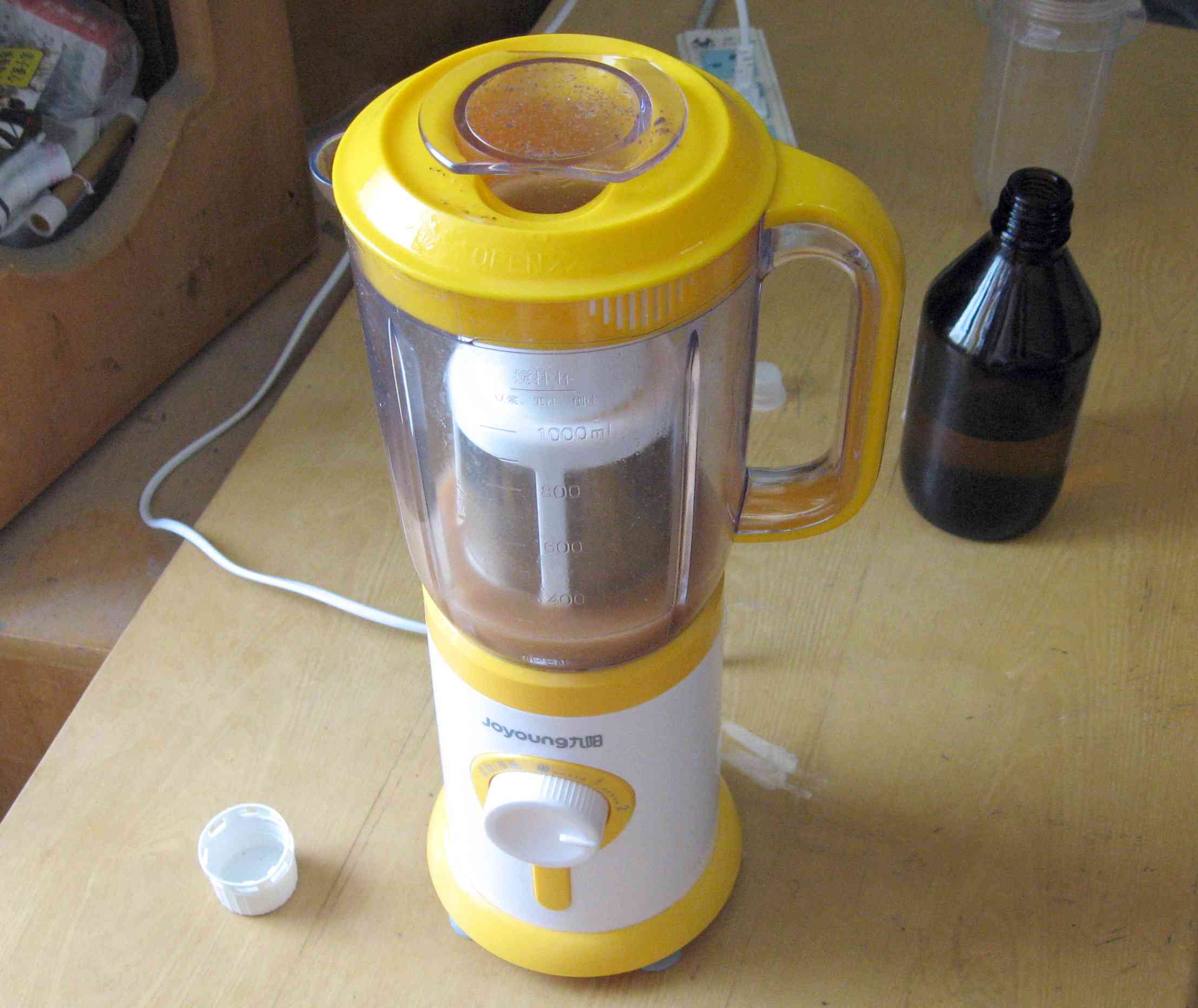 300 ml of pure alcohol (from the bottle in the background) have been added through the top and the knife is rotating at full speed. You see the nutmeg-alcohol milk already appearing as it slowly seeps through the inner sieve. 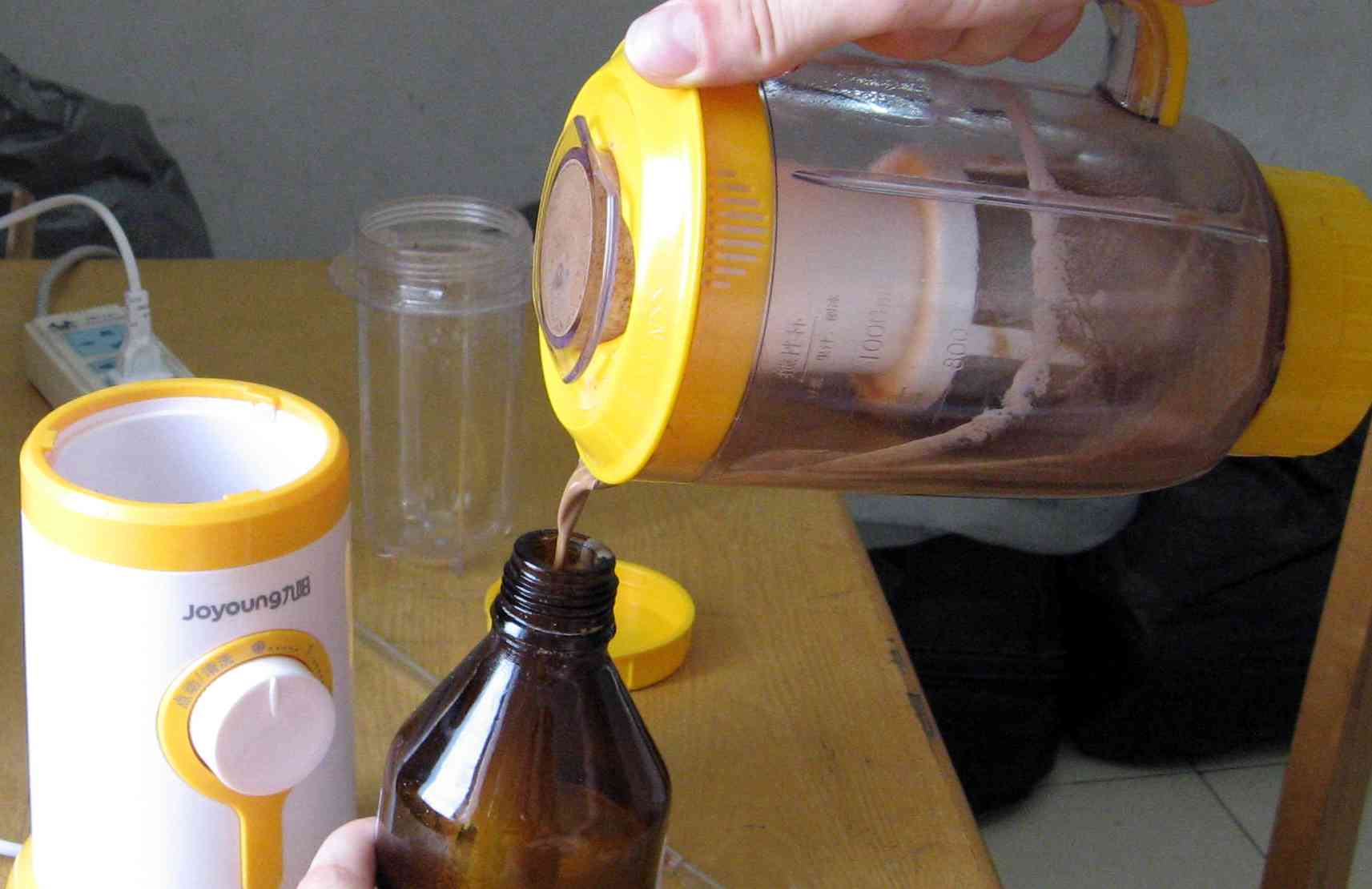 The milk is put into a dark bottle and the rest of the total of 500 ml alcohol, namely 200 ml, is added to the top as before in order to extract a second time. I let the knife rotate at full speed again for a while, then decant the suspension. Then wait and decant a few times more as the mud inside the sieve will still lose a lot of fluid.

Toss the mud away and let the bottle with the suspension settle. The result of decanting and letting it all sit a few days is the following 200 ml of nutmeg extract above 300 ml of dense milk that has still not settled (photographed against the morning sun): 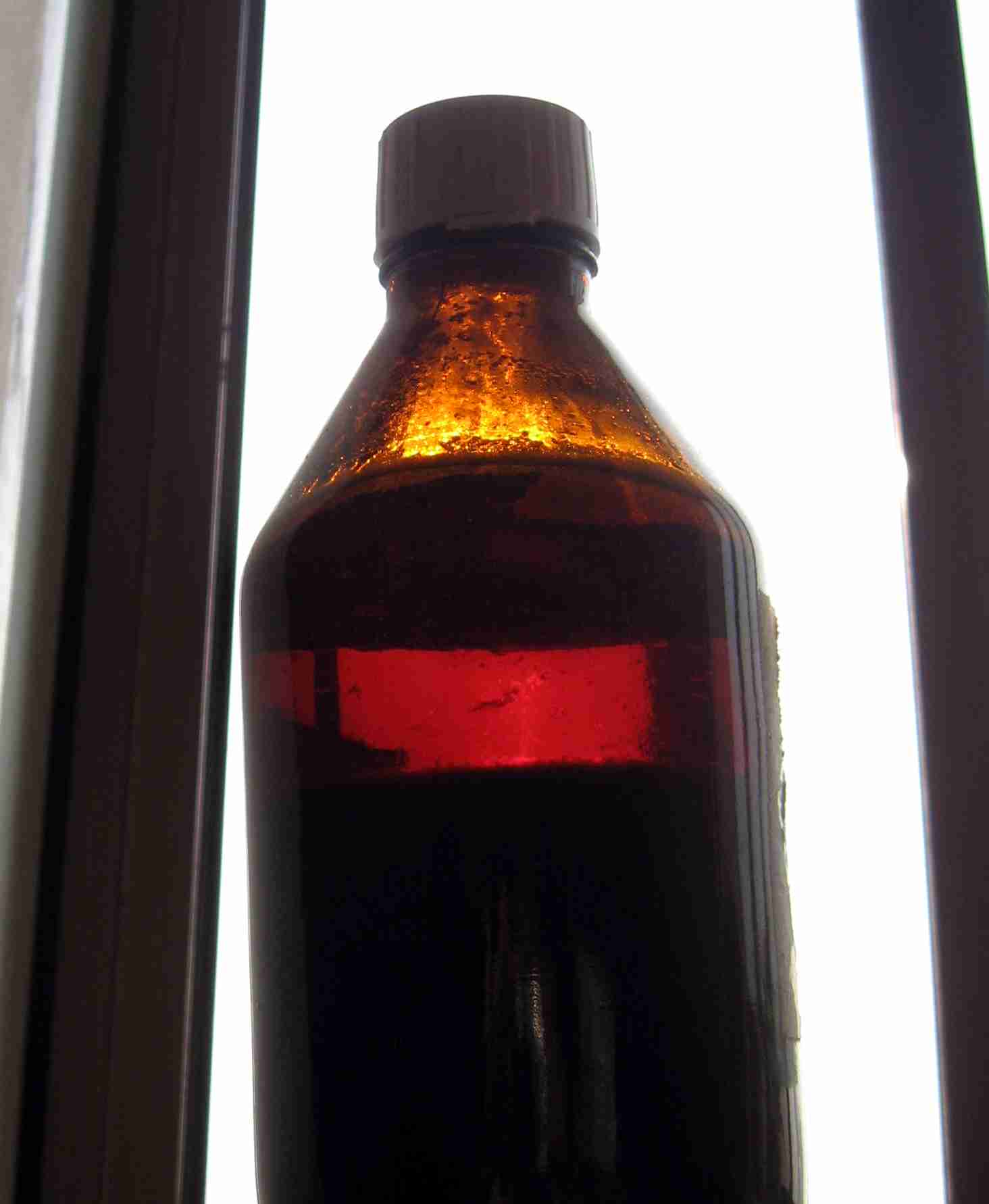 Since we used 30 large nuts, every 10 ml is the equivalent of one of them. We may have lost a lot by just tossing away the mud and all that, but on the other hand, these were larger nuts, so I try 5 ml(less than half a nut) to see how strong it is. It is easy enough to take it out with a thin tube attached to a syringe. The syringe plunger is pulled out to the 2.5 ml mark and the contents are subsequently emptied into a warm bowl of soybean milk. Note that the syringe is mostly empty of course because most of the extract is in the thin tube that dips into the liquor above the still not settled suspension. The yellow color is all nutmeg oils; alcohol is colorless.

Add yours to a cup of hot morning coffee or sweetened breakfast soy milk (the important with nutmeg is timing!)

Remember – this is a science blog. This is not about cool stuff one can binge on or impress friends with, playing drinking games; if you want that, you are wrong here! If you thought this is going to get you a fine liquor to be sipped with a select circle of artists while discussing the clash of post modernism with libertarian ideals, you are even wronger here. This is about taking nutmeg responsibly and dosing reliably given that the nuts vary so much in size, quality, and oil content.

Keep the extract well labeled in a safe, cool, dark place inside a tightly closed bottle to prevent degradation. It is unlikely that kids will want to drink such nasty smelling stuff (it is almost pure alcohol), but keep it safe from college/university age roommates who may think that binging on your nutmeg extract is a great idea. The 5 ml I tried were unexpectedly strong! There could not have been much been tossed out with the mud. 20 ml can be more than enough for winding up in hospital, depending on the person’s body and situation, so write that onto the label, too.

Be very careful with exploring high doses – I warned you! Whatever you may hope to find there, it isn’t there with nutmeg, and even if it should be there in your case (rare, but it happens for some), it is mostly not worth the nausea and perhaps liver/kidney/brain damage that you may get into the bargain.

All things in moderation.