The greatest hurdle before committing suicide is the fear of dying and death as well as the fear of hurting people we care about. In order to assist suicide, Suicidal Philosophy alleviates these fears rather than stoking them like traditional Philosophy of Suicide does. Suicidal Philosophy is much more science than philosophy, as the following outtake of a long article aimed at helping people in distress exemplifies. It explains why it is that if you jump out of a 20 story building, your life already ends peacefully more than six meters before impact with the ground:

The fear of dying involves fearing pain and plainly fearing fear. Anybody who has ever endured a panic attack or so called horror trip will fear this ‘fear of fear’. There are drugs like Nembutal (pentobarbital) that circumvent such problems. There are also drug combinations involving dissociatives like Ketamine, or the often also for executions applied sequential injection of sodium thiopentalbarbiturate, pancuronium bromide muscle relaxant, and potassium chloride for cardiac arrest.

Especially recommendable [1] is oxygen deprivation by breathing pure nitrogen or “balloon-time” helium. The hypercapnic alarm response due to elevated carbon dioxide blood levels is completely avoided. The patient is unconscious already after about twelve seconds and dies after a few minutes.

What has to my knowledge never been argued is that the up to half a second delay dt between receptor activity and the onset of consciousness [2, 3] allows us to not experience the onset of dying at all even without the help of drugs.

There are those who argue desperately against the presence of this time delay, because this delay yet further underlines the points made about us being to a large extend dead zombies anyway. Their misinterpretations have been well countered [4, 5] and anyways, this time delay is not impossibly long but surprisingly short:

A signal travels about 20 milliseconds (ms = a thousands of one second) from a receptor to the brain. If the nerve wiring is used to pre-process data, like this occurs in the eye’s retina for example, the time goes up to 50 to 100 ms. Hardwired reflexes or trained responses like fast table tennis returns can be unconsciously dealt with in 200 to 300 ms. Taking into account how slow nerves transmit and how much calculation is involved to complete high level functions like conscious thought, a delay of 500 ms is an unexpectedly short and entirely necessary holdup.

Nevertheless, it is long enough to be of some comfort to anyone committing suicide by jumping from an elevated structure. Selecting a 20th floor of a building ensures at least 60 meters height - a safe estimate employing only 3 meters per floor although office buildings have mostly around 3.5 meters per story. Falling down a height of sixty meters onto the deserted asphalt below gives one’s body a velocity of about 34 meters per second after 3.5 seconds [one hits the ground with v = (2 *60 m * 9.8 m/s2)1/2]. 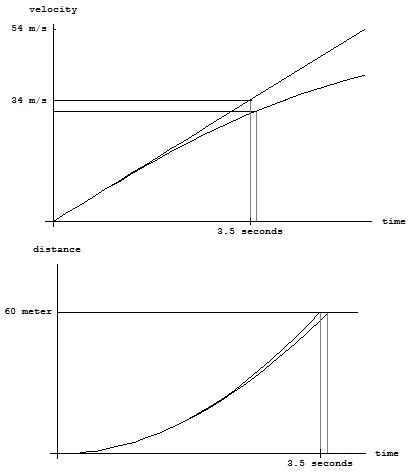 Air resistance can be neglected, because it is proportional to the square of the velocity, and the terminal velocity of a falling human body is faster than 54 m/s even with fully outstretched limbs (considering air resistance, the result is 31 m/s after 3.6 s instead).

Falls from a mere ten meters onto unyielding ground have already often deadly consequences, but 34 m/s, that are 76.2 mph or 122.4 km/h, are enough to immediately switch off and destroy one’s brain regardless of the body’s orientation at impact.

Assume a cautiously conservative estimate employing a neural delay of only dt = 200 ms. Approaching the ground to about six meters above of it, then having a velocity of 32 m/s, one falls more than six meters (32 m/s * 0.2 s) during the time dt between the eyes receiving the light and the occurrence of the neural correlates of consciousness (NCC) [6] of the seen situation.

Resultantly, the conscious perception is that of a fast approaching ground, but this movie stops playing when the ground is still more than six meters away! One does never even come close to experiencing the impact, let alone having any pain because of it.

A similar argument can be had for a correctly placed gun, for example resting with the nozzle inside the mouth, pointing up- and backward to deliver a higher caliber bullet through where the brain stem meets the hypothalamus.

Of course, most people do just not feel well at large heights and many lack knowledge and skill to place a gun correctly. The gist should be that there are plenty of methods out there for you to find one that is right for you.

[3] Libet, B.: Are the mental experiences of will and self-control significant for the performance of a voluntary act? Behavioral and Brain Sciences 10, 783-786 (1987)

[4] Libet, B.: The experimental evidence for subjective referral of a sensory experience backwards in time: reply to P. S. Churchland. Philosophy of Science 48, 182-97 (1981)