Sean Gibbons
The synthesis of non-equilibrium thermodynamics and biology, pursued in fits and starts over the years by an eccentric cast of thinkers, has produced a few scientific red herrings, but the overall idea has expanded our biophysical horizons.  I'll summarize what I've come to understand about the development of biological thermodynamics and its implications, while trying to skirt the rabbit holes.

First, I suppose a brief explanation of thermodynamics is needed.  To put it concisely, thermodynamics is the branch of physics that deals with the conversion of energy into different forms.  We derive our physical conceptions of temperature (average kinetic energy of matter, i.e. how fast atoms and molecules bounce off of one another within a substance), heat (energy transferred between two bodies or systems in thermal contact), work (force multiplied by distance, i.e. joules), Gibbs free energy ('useful' energy, or energy available to do work) and entropy (disorder) from thermodynamics.  The first and second laws state that 1) energy can be neither created nor destroyed within an isolated system, only modified in form, and 2) entropy will never decrease within an isolated system.  Early work in classical thermodynamics involved designing engines that were able to perform mechanical work by transferring energy from a warm region to a cool region (like the sterling engine, diesel and gasoline engines, or nuclear power plants; see below).  Modern thermodynamics has evolved beyond heat engines to encompass chemical reactions and molecular/atomic theories of matter (chemical thermodynamics and statistical mechanics).

Parallels can be drawn between our planet and a heat engine.  The hot sun radiates high-energy light (hv) that is absorbed by our planet and re-emitted back to cold space as lower-energy infrared radiation.  A certain proportion of this flow is used to drive the circulation of our oceans, our atmosphere, and to sustain life (via photosynthesis).

Erwin Schrödinger (a founding father of quantum physics), in his work entitled What is Life? (Schrödinger, 1944), attempted to reconcile biology with the observed laws of chemistry and physics.  He proposed two biological research programs: 'order from order' and 'order from disorder'.  The former was based on the fact that life involved self-replicating ordered structures that depended upon a strange 'crystalline molecule' called DNA that Watson, Crick, and Franklin would later demystify.  This 'order from order' hypothesis became the central dogma of molecular biology and led to an explosion of research and understanding.  The 'order from disorder' hypothesis (a misnomer) lay dormant for many years due to its assumed contradiction of the fundamental laws of thermodynamics.  In his work, Schrödinger observed that, at first glance, living systems seem to defy the second law of thermodynamics, which states that within isolated systems entropy should be maximized - chaos should reign.  Schrödinger, therefore, strayed from the traditional equilibrium-based thermodynamics that had been developed up to that point and began to investigate the thermodynamics of non-equilibrium systems.

A non-equilibrium system is defined in terms of external gradients maintaining a state at a certain distance away from equilibrium (Schneider&Kay, 1994).  These gradients (fluxes of energy and matter in and out of the system) somehow allowed non-equilibrium processes (convection cells, tornadoes, planetary rings, etc.) to maintain organized internal structures, vaguely reminiscent of living systems.  Schrödinger proposed that life itself is a non-equilibrium process by which localized order is maintained at the expense of larger global entropy production, suggesting that the study of living systems from a non-equilibrium perspective would reconcile biological self-organization and the inorganic world (Schrödinger, 1944).  When ordered processes (physical or biological) emerge from a non-equilibrium state, they develop and grow at the expense of increasing the disorder at higher levels in the system’s hierarchy.  Living organisms swim against an entropic stream, which tends to carry everything to an inert state of equilibrium, by catalyzing an accelerated increase in higher-level disorder proportional to the magnitude of biological organization.  Thus, metabolism allows the organism to export the internal entropy that it cannot help but produce by being alive (von Stockar&Liu, 1999).

Perhaps the simplest illustration of biological thermodynamics is microbial metabolism (pictured below).  E. coli can consume organic compounds (glucose, for example) and “breath” oxygen to stay alive (aerobic respiration).  Energy-rich electrons are stripped away from glucose and made to flow through an electron transport chain, ending up in H2O.  This downhill flow of electrons is harnessed to pump ions across a membrane, much like a windmill pumps water from underground, creating an electrochemical gradient that can be used to do the work of building and maintaining the cell.  The Gibbs energy difference (∆G) between food and the metabolic waste product determines the driving force of metabolism (von Stockar et al., 2008), just as elevation gradients determine how quickly water rushes down a stream.  The exact metabolic rate is controlled by the balance of energy released through catabolism (breaking down molecules), consumed by anabolism (building up molecules) and the differences in chemical entropies between metabolic reactants (food) and products (waste).  The principal entropic byproduct of aerobic respiration is heat (von Stockar and Liu, 1999), which heightens disorder in the surrounding environment by increasing the temperature (atoms jostle against one another more vigorously) and 'pulls' metabolism in a forward direction (just as the expanding universe 'pulls' galaxies apart, or as a gas is 'pulled' into a vacuum). The bacterium siphons away some proportion of useable electronic energy to perform uphill work (building proteins, sugars, nucleic acids, and lipids), while the rest is relinquished to pay the thermodynamic piper.  In other words, life buys its lunch with chaos. 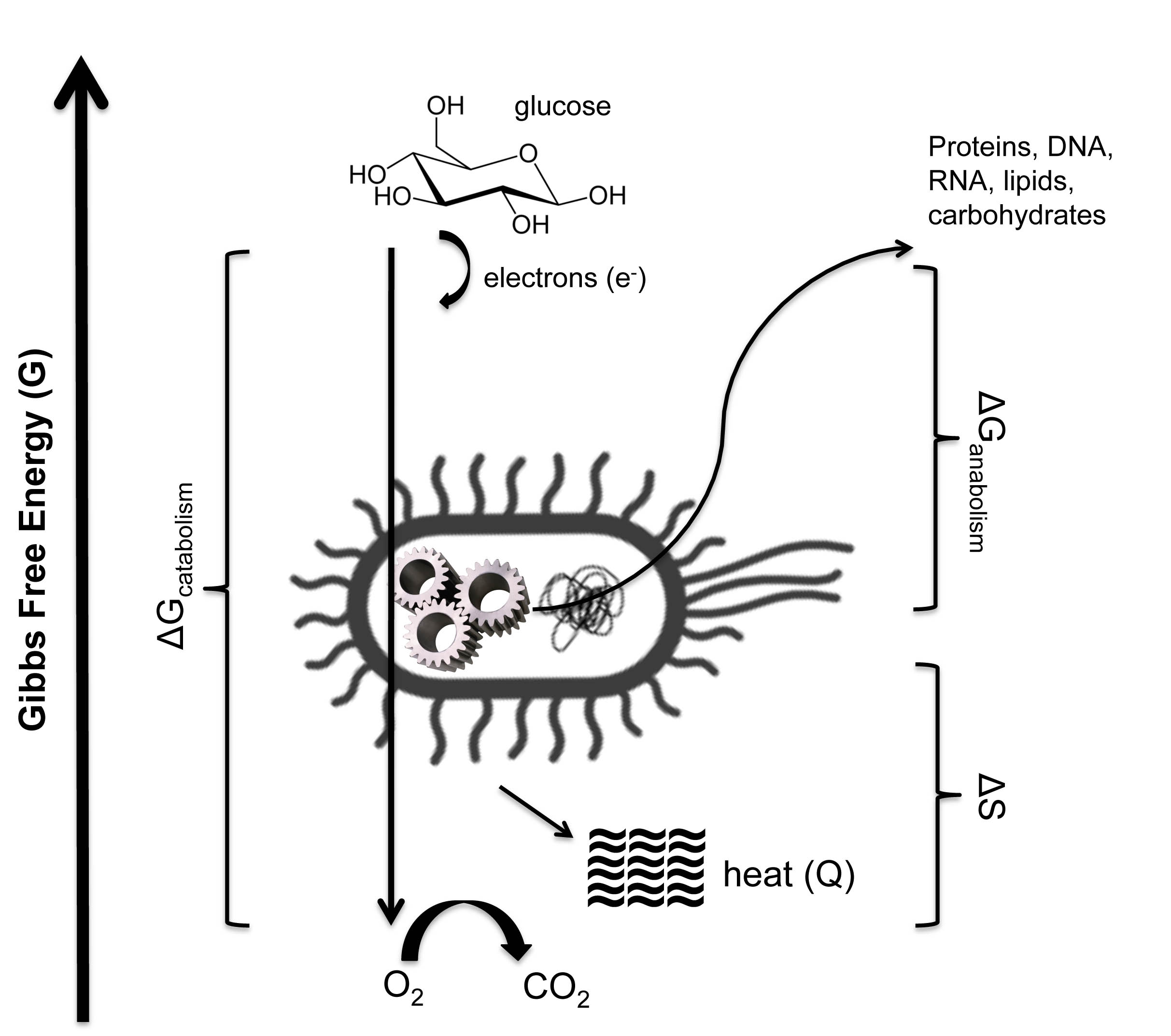 The total entropy change (∆S) is a combination the chemical entropies of the products of metabolism and the heat lost during the breakdown of the substrate (glucose).

It is necessary to point out that Schrödinger's 'order from disorder' hypothesis, while conceptually useful for its time, is fundamentally flawed.  What he should have said was 'biological order from non-biological order'.  In reality, the organization that we observe in the universe cannot be derived from chaos.  Contemporary order is descended from the Big Bang (and, yes, the occasional statistical fluctuation), when all the space, matter and energy in the cosmos were compressed into a single, infinitesimally small point.  At that moment, the universe was in its maximum state of order.  Since then, the echoes of that ancient uniformity are found in coherent structures like plants, suns, galaxies, and Tupperware.  It is from the energy differentials created by this diluted cosmological order that life arose and has persisted. 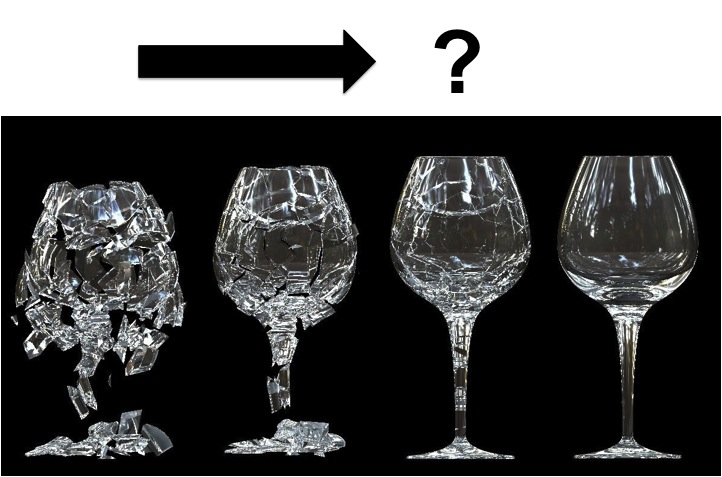 Today, the idea that life is derived from the inorganic world seems relatively straightforward.  Most people accept that living things obey the laws of physics.  Understanding the dynamics of energy and matter within living systems allows us to predict biological phenomena from physical laws.  Because life is so vastly complex, these predictive powers have remained elusive.  After a century of extraordinary research in molecular biology and evolution (order from order – driven by genetics), and advances in large scale data collection and computation, biophysical science is positioned to answer Schrödinger’s call to address 'biological order from non-biological order'.  Brilliant trailblazers, like Ilya Prigogine, have illuminated foundational relationships between non-living processes and living organisms through non-equilibrium thermodynamics.  Sub-disciplines, like astrobiology and biogeochemistry, have flowered forth from these insights.  James Lovelock established the gaia hypothesis (Lovelock and Margulis, 1974), which integrated living organisms into the dynamic chemistry of our oceans and atmosphere.  Lovelock's predictions have lead to potential spectroscopic methods for detecting life-bearing planets outside of our solar system by looking, for example, for significant quantities of methane in oxidized atmospheres.  James Brown has proposed a metabolic theory of ecology (Brown et al., 2004), hypothesizing that patterns of species diversity vary predictably with temperature, suggesting a biophysical approach to ecology.  Brown’s theories could be employed to help predict ecological shifts due to changing climate conditions.  Perhaps most interestingly, these ideas may culminate in the discovery of how life arose (or could have arisen) on Earth, and how it might develop elsewhere in the universe.

In conclusion, we cannot separate ourselves from the rest of the physical universe.  The distinction between life and non-life is arbitrary.  We are exquisite machines, sustained by electrochemical currents.  Life on Earth has achieved amazing longevity due to its evolutionary memory, which is recorded and passed down from cell to cell via the genetic code.  This living document has been characterized to such an extent that we can now read and even write our own biological prose.  3.8 billion odd years ago, the chance marriage of DNA/RNA software to physiological hardware became what we recognize as life.  Just as life began as a synthesis of memory and muscle, our nascent understanding of life should proceed through a coupling of evolutionary biology (the genetic history of life) and biophysics (the structural framework and physiochemical engines of life that have survived natural selection and earned a place in the genetic code).  Such a synthesis can be found in the emerging field of synthetic biology.  Christina Agapakis, a synthetic biology blogger and practitioner, defines her field as “three independent but interrelated research programs aimed at engineering life… - building genetic circuits and devices based on interchangeable biological parts, chemically synthesizing genetic pathways or whole genomes, and trying to recreate the earliest life forms with protocells.”  Synthetic biologists fabricate DNA in vitro, allowing them to disassemble and reassemble living things from the ground up, and to combine novel forms of hardware and software that don't currently exist on Earth.  This field draws us into a future where the manipulation and manufacture of living things is as natural to us as fixing a bike or baking a pie.  It will grant us incredible powers to alter and control our environment, for better or for worse, and lead us to unimaginable discoveries that will change the way we think of the universe and ourselves.