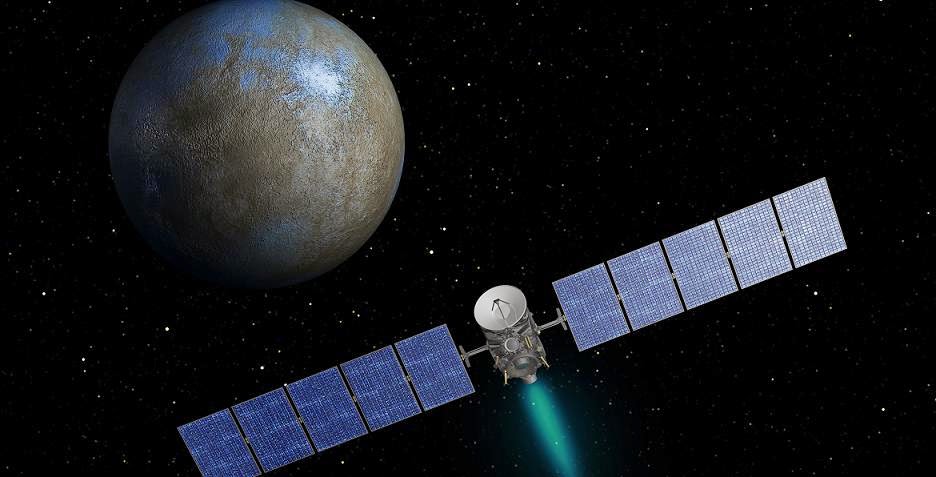 Everyone who has ever gazed in wonder at the night sky, everyone who yearns to know what lies beyond the confines of our humble home, everyone who longs for adventure and seeks to peer beyond the horizon, and everyone awed by the mystery, the grandeur, and the immensity of the cosmos can share in this,” he told me. “Together we are going to be introduced to a strange new world!”
Dawn is slated to arrive at Ceres on Mar. 6. The spacecraft will enter the dwarf planet’s orbit at an initial altitude of 13,500 km for a first full characterization. Then it will explore Ceres from survey orbit at 4,400 km, and next it will go lower to only 1,470 km. To travel from one orbit to another, it will use its extraordinary ion propulsion system to spiral lower and lower and lower.

“The exact time of orbit entry varies a little bit because of changes in the schedule of Deep Space Network availability, which affects when we pause ion thrusting. In addition, of course, while we have estimates of Ceres' mass, we do not know it precisely, so the strength of its gravitational pull is not certain,” Rayman revealed. “Nevertheless, in our latest design, orbit entry occurs around March 6 at 06:30 UTC. It is unlikely to change by more than a few hours.”
But this isn’t a first time when Dawn visits a celestial body. In July 2011 the spacecraft entered the orbit of asteroid Vesta for a one-year exploration. Thus, Dawn will be the first mission to orbit two separate extraterrestrial bodies. “We will make all the same kinds of measurements at Ceres that we made at Vesta and will produce all the same products, including the geological maps. That is the one of the benefits of having one spacecraft that can orbit multiple deep-space destinations, a first in the exploration of space," Rayman said.
Vesta and Ceres are important for scientists to explore because they are remnants of the formation of our solar system. It's possible that both bodies contain the basic building blocks associated with life. Scientists believe that Ceres may harbor an internal ocean of liquid water under its surface. The surface is probably a mixture of water ice and various hydrated minerals such as carbonates and clay.
“This is an exciting opportunity to study an exotic, alien world of ice and rock. We hope to discover how the large inventory of water -- mostly frozen, but some perhaps as liquid -- affects this dwarf planet. There may be signatures in the physical appearance, as displayed in our photographs, and in the composition, as revealed by our other measurements,” Rayman said. “Part of the thrill of an ambitious adventure like this, however, is that we cannot say what new discoveries and findings we will make. This is truly a mission of exploration. Ceres is the first dwarf planet discovered, the largest body between the sun and Pluto that a spacecraft has not yet visited.”
The spacecraft will also deliver the highly anticipated high-resolution images of Ceres. The photos will be well over 800 times better than the best we have now from Hubble. “For more than two centuries, we have only been able to glimpse it as a fuzzy little patch of light,” Rayman noticed. “In its lowest altitude orbit, Dawn's images will have a resolution of better than 40 meters per pixel. So we will be able to see exquisite detail compared to what we have now.”

As the Dawn approaches Ceres, the excitement of unveiling the unknown, mysterious protoplanet grows. This ‘strange new world’ as Rayman describes it, is about to unlock its secrets. “I am very excited about the arrival at Ceres. Before the Dawn mission, Vesta and Ceres were among the last unexplored worlds in the inner solar system. We are about to unveil a mysterious orb that has beckoned for more than two centuries. It holds secrets from the dawn of the solar system,” Rayman said.
Rayman provides all the latest updates regarding the mission on the Dawn Blog.
The Dawn mission to Vesta and Ceres is managed by NASA's Jet Propulsion Laboratory, a division of the California Institute of Technology in Pasadena, for NASA's Science Mission Directorate, Washington D.C.
Astro Watch
More Articles All Articles
About