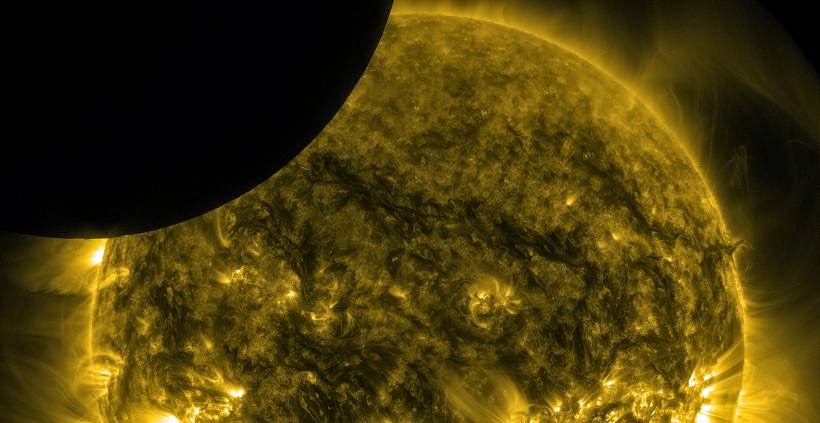 On Nov. 22, 2014 from 5:29 to 6:04 p.m. EST., the moon partially obscured the view of the sun from NASA's Solar Dynamics Observatory (SDO), orbiting more than 22,000 miles above our planet's surface. This phenomenon, which is called a lunar transit, could only be seen from SDO's point of view. In 2014, SDO captured four such transits - including its longest ever recorded, which occurred on Jan. 30, and lasted two and a half hours. SDO imagery during a lunar transit always shows a crisp horizon on the moon - a reflection of the fact that the moon has no atmosphere around it to distort the light from the sun. The horizon is so clear in these images that mountains and valleys in the terrain can be seen.

Beyond the novelty of observing an eclipse from space, these images have practical value to the SDO science team. The sharp edge of the lunar limb helps researchers measure the in-orbit characteristics of the telescope--e.g., how light diffracts around the telescope's optics and filter support grids. Once these are calibrated, it is possible to correct SDO data for instrumental effects and sharpen the images even more than before.

When snapping this image, solar activity has been low for almost a week. Two sunspots, one old and one new, could break the quiet. AR2192 and AR2216 have tangled magnetic fields poised to criss, cross, and explode. NOAA forecasters estimate a 25% chance of an X-flare on Nov. 24rd.