Dan Coe
They did a great job describing the Hubble Ultra Deep Field, but an awful job showing a picture of it.  "They" will remain nameless, as they otherwise put together a really great exhibit of images from the Hubble Space Telescope.  But in a panel where they talk about the Ultra Deep Field, they show pictures of something completely different: two galaxy clusters named Abell 1689 and CL0024.  They are beautiful examples of gravitational lensing which enables us to almost "see" dark matter, but not they are not the UDF. 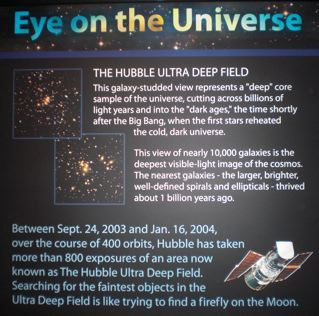 I have studied all three of these images in some detail.  I measured distances to 8,000 or so galaxies in the UDF.  And I've mapped the dark matter in A1689 and helped map it in CL0024.  Much of my career so far has been spent analyzing these images, so I was happy to see them displayed and discussed, but frustrated that they got all mixed up!

I understand that science reporting and presentation to the public isn't always accurate.  That's a fact of life I'm sure I'll have to accept more and more as I progess in my career in astronomy.  But how could they make such a mistake as to show the wrong images?  Or, as one friend just suggested, could they have made a conscious decision to show the wrong images because they thought they looked better?  I doubt it and hope not.  I'd be happy to hear about your similar experiences or your theories as to what's going on here.

I did ask to speak to someone in charge of the exhibit.  He didn't seem overly concerned and told me to send in an e-mail comment, which I did.  In case you're interested, I'll keep you posted here about any responses I receive.  At this point, what can they do?  I doubt they would spend the money necessary to redo the whole exhibit.