Dan Coe
How did the first stars and galaxies form? Are there other planets like Earth? What is the universe made of? These are the fundamental questions that astronomers hope to answer in the next decade with a new generation of space- and ground-based telescopes. Today an expert panel presented a detailed plan prioritizing which telescopes should be funded to maximize the expected scientific returns while fitting within realistic budget expectations.

Continued support for Hubble as well as its successor, JWST, were implicit throughout the report. While these telescopes are taking detailed images of small parts of the sky, other telescopes are proposed to complement them:

The big winners were telescopes planning to repeatedly survey (basically make movies of) large areas of the sky. WFIRST will do so from space and LSST from the ground. WFIRST, the Wide-Field Infrared Survey Telescope, is a new incarnation of JDEM (which in turn was based largely on SNAP, pictured above right). As previously envisioned, it will measure the repulsive strength of dark energy "w" by measuring to ever higher precision the expansion history of the universe. (This is the sequel to our successful efforts in the 1990's to measure Hubble's constant, the current expansion rate of the universe, as well as its (completely unexpected) acceleration.) But now it will observe in the infrared. And as a new twist, WFIRST would also search for extrasolar planets which occasionally microlens their host stars (more on that below...). ace as we vow to measure "w first" before this decade is out. This time our competition is Europe which has plans for a very similar mission to measure "w" named Euclid. Given the similar missions and high price tags (as well as the strong spirit of international collaborations present in most of our research), a merger seems most sensible, and there have been some discussions toward this end between NASA and ESA. The decadal report does recommend considering a WFIRST-Euclid merger with a few stipulations: 1) the mission should do all their recommended science, including microlensing exoplanets; 2) it should save money overall; 3) the U.S. should have the lead. For its part, ESA needs to prioritize Euclid as highly as NASA. But this decision won't come until late 2011, which could further complicate matters. The desire for the U.S. to lead this mission can perhaps be understood in the big picture where ESA leads LISA (see below) while NASA leads WFIRST, with both contributing equally to the other financially.

The panel also highly prioritized the search for extrasolar planets.  However, they recommending killing SIM, a space-based planet finder first recommended in the 1991 decadal survey and originally scheduled for launch in 2005 before encountering a series of budget cuts (emerging as "SIM Lite"). While ultimately in favor of such a mission, this panel cautions "it is too early (!) to determine what the design of that space mission should be, or even which planet-detection techniques should be employed." Basically, new techniques have become prolific at planet finding and should be studied further.

But we did already launch a space-based planet-finding telescope just last year! The Kepler mission detects planets that cross (transit) in front of their stars, dimming them ever so slightly (above). WFIRST would detect planets using microlensing, a relatively new technique which detects slight brightening of the star as a planet (around its own star) passes far in front, lensing and magnifying it ever so slightly (see below). SIM would have looked for positional wobbles, which is arguably better. These techniques all have the potential to find Earth-like planets! Meanwhile, measurements of radial velocity wobbles from the ground have proven most prolific at detecting new planets. However, this technique is currently limited to finding larger planets than the above methods. 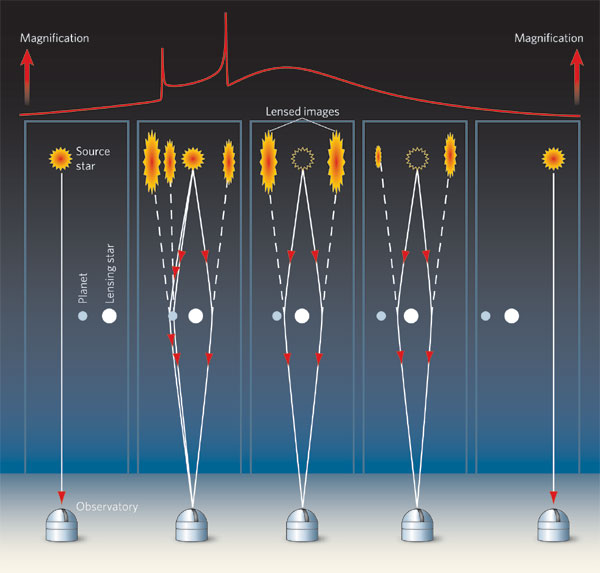 NASA's third priority from space should be contributing to LISA (led by ESA) which aims to detect gravitational waves, an exciting prediction of Einstein's General Relativity. LISA leapfrogged ahead of IXO, the International X-ray Observatory, which was ranked higher by the last decadal committee.  Concerns have arisen about IXO's risk and readiness.

On the ground, NSF's third priority should be supporting a ginormous telescope (a "GSMT"). TMT and GMT are already being planned in Hawaii and Chile, respectively, mainly with private funding. The panel recommends NSF choose one and support it at 25%. Such large telescopes had recently been slated as our top ground-based priority, but this panel instead prioritized LSST, the Large Synoptic Survey Telescope, again in part for its readiness.

Perhaps in part in response to the economic times, this panel was much more deliberate than some previous panels about cost considerations. They solicited independent estimates of each project's costs, and they made sure that the sum of their proposed missions fit within projected budgets. They considered both optimistic budgets as well as the cuts that would be necessary in the face of leaner budgets.

Exploring the billions and billions of galaxies, stars, and planets will cost us billions and billions of dollars over the coming years. How fortunate we are that our society has placed sufficient value on astronomy that we are given the resources to explore our origins. I would give it all back if we could use the money instead to, say, end world hunger. Unfortunately politics doesn't work that way. So instead, allow me to simply express our gratitude for the taxpayer support. I am happy to give you your money's worth in the ways that I can, including this blog (sorry it's been a while!). Of course all of this funding will also create jobs, and perhaps most importantly to our worldly concerns, these projects will help inspire the next generation of students to pursue the sciences in STEM fields and to develop the innovations of tomorrow.

Of course you can find much more discussion about this online. The
full report is available here:

Astronomers
are writing and talking about it around their internet water cooler,
Cosmic Variance:

And
I'll recommend at least one other good article I saw, including a
breakdown of the priorities and their costs: