Dan Coe
NASA's Jet Propulsion Laboratory was closed Monday as wildfires came within two miles of the facility.  The decision to give most of the 5,000 employees the day off was made Sunday evening.  At that point the fire was no longer a threat to the lab (you think they'd let a government lab burn down?), but the air quality was very poor.  Only mission-critical personnel reported to work.

Lab reopened Tuesday, but I continued to work from Caltech until today, Thursday.  The air at JPL was still smoky, though by now not much worse than at Caltech or at my home in Glendale.

A greater threat had been posed to the historic Mount Wilson.  The astronomical observatories, television broadcast towers, and cell phone towers were all believed doomed Sunday night until firefighters made one last stand to remove flammable brush and drop fire retardant from the air.

We are grateful to all the firefighters bravely battling this blaze.  JPL (sort of a city within a city) has its own fire department which has been supporting these efforts.  And our hearts have been saddened to learn that this "Station Fire", the largest wildfire in our nation's history, was caused deliberately by an act of arson.

Below is a photo I took a week ago Thursday of fires burning near the lab.  I work in a building toward the left hand side of the picture.  By the early morning of Sunday August 30, the flames had actually come to within a few hundred yards of the lab's boundary. 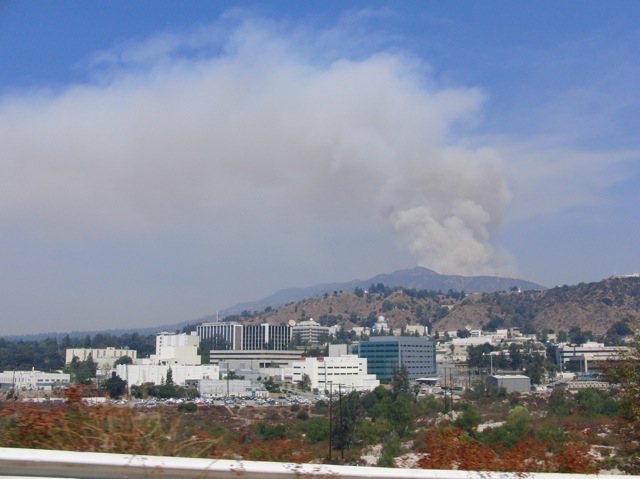