Dan Coe
Monday afternoon the space shuttle Atlantis blasted off into the Florida sky carrying with it the hopes and dreams of astronomers like me and people around the world.  Seven NASA astronauts have set out to repair the aging Hubble Space Telescope and upgrade it with new instruments.

The launch was picture-perfect from our vantage point at Space View Park in Titusville, Florida.  This may be the second shuttle launch I have seen in person, but it is the first I am old enough to remember.  (photo courtesy of David Radburn-Smith) 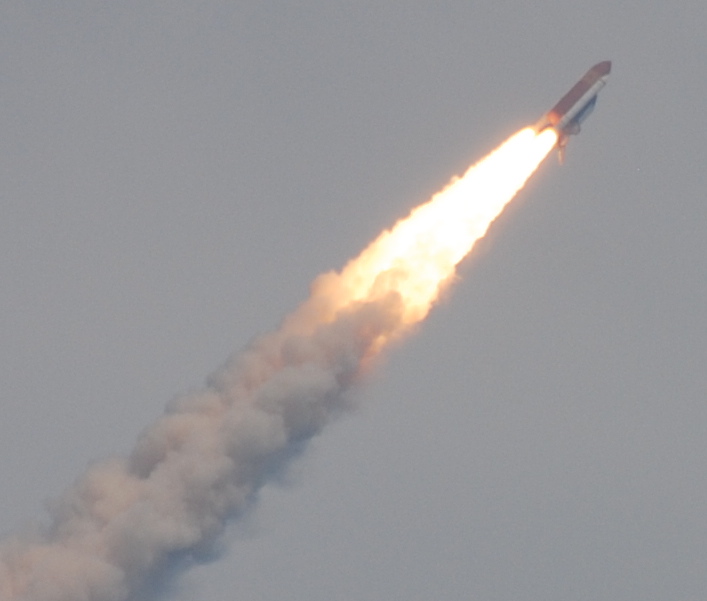 Many people turned out to witness a launch we all helped make happen.  Originally scheduled for 2004, this servicing mission "SM4" was canceled in the wake of the Columbia disaster due to safety concerns.  But thanks in large part to the support from all of you, Hubble's adoring fans, NASA eventually decided to reschedule the mission.  Personally I believe we owe it to the brave Columbia crew to carry on their legacy of space exploration and discovery, and I am glad NASA is doing just that.

I am particularly hopeful for SM4 as my colleagues and I have been awarded a small slice of the precious Hubble observing time for this coming cycle.  We will use the new WFC3 camera (which I describe below) to observe a pair of colliding galaxy clusters similar to the famous Bullet Cluster which delivered pretty convincing direct proof for the existence of dark matter.

If all goes according to plan, the shuttle crew will perform the following tasks in 5 EVAs (Extravehicular Activities).  Highest priorities are the installation of two new instruments: the Wide Field Camera 3 (WFC3), a new multiwavelength imager, and the Cosmic Origins Spectrograph (COS), a new UV spectrograph. (A spectrograph splits light like a prism to identify gas clumps and measure precise distances to them.)  They also hope to repair two instruments: the Advanced Camera for Surveys (ACS) and the Space Telescope Imaging Spectrograph (STIS), older but complementary versions of WFC3&COS, respectively.

Below is the expected mission timeline (courtesy of this NASA site) as well as more info about the instruments, new&old, from an astronomer's point of view.


Now a bit more about the instruments, in order of the timeline...

WFC3 will reveal dramatic new views of our universe in the near-infrared, obtaining crisp pictures (0.12 arcsecond resolution) over a more substantial area of sky than Hubble's NICMOS near-IR cameras.  Still its IR camera will only cover 120 x 120 arcseconds, about the size of the previous WFPC2 camera, or Roosevelt's eye on a dime held at arms length.  (For a comparison of the cameras' fields of view and other info, click here.)  The near-IR allows us, among other things, to see about 13 billion years back in time (700 million years after the Big Bang), when we believe the first galaxies were reionizing the universe.  Anything that may have formed before reionization would be difficult to see through the murky hydrogen fog.

WFC3 is a jack of all trades, also observing in the optical and ultraviolet parts of the spectrum with a razor sharp 0.04 arcsecond resolution over a 160 x 160 arcsecond field of view.  The gains  provided by WFC3 are greatest in the UV&IR (click here) in terms of discovery efficiency = throughput X area (the ability to view a wide area deeply).  If repaired, ACS (see below) will still be more efficient at optical wavelengths.

WFC3 will replace WFPC2 which was installed in 1993 on SM1, the same mission that fixed Hubble's initial "blurry vision".  WFPC2 has been a steady workhorse for Hubble over the past 15 years, producing many iconic images such as the original Hubble Deep Fields, the Eagle Nebula...  But with the installation of ACS in 2002, WFPC2 was effectively benched.  WFPC2 saw limited playing time for five years until ACS went down with a short circuit in February 2007.  The old veteran then regained its starting job.  But battered by cosmic rays, WFPC2 is ready for a well-earned retirement.  As part of SM4, the astronauts will return WFPC2 to Earth for eventual display in a museum.  WFPC2 was built by NASA's Jet Propulsion Laboratory (JPL) where I currently work.


Day 5 - EVA 2 - Replace gyroscopes and one of two battery modules.

Since 28 August, 2005, Hubble has been operating in "two-gyro" science mode, limiting the area of the sky that can be observed at any one time. A third functioning gyro was turned off to extend its lifetime.  On EVA 2, the astronauts will replace all six gyros.

COS is a new UV spectrograph which will complement a repaired STIS.  At the far-UV end of the spectrum, COS will provide higher resolution and throughput compared to STIS.  These crisp spectra may enable them to directly determine the compositions of the atmospheres of large extrasolar planets!

Another science goal for COS is mapping the "cosmic web" of our universe.  Galaxies and galaxy clusters live in large dark matter structures which are linked by a filamentary network of dark (and regular) matter.  We can't directly see the dark matter, but COS can detect the hydrogen gas in these filaments as it absorbs some of the light from background quasars.

If repaired, the Advanced Camera for Surveys (ACS) will likely resume its role producing stunning pictures in the visible part of the spectrum.  Hubble astronaut John Grunsfeld is confident they can repair ACS in a single day, but if they can't there may be time to finish the job in EVA 5.

STIS is a UV spectrograph that, if repaired, will still see plenty of use to complement COS.  STIS would remain the more efficient instrument in the near-UV.  A power supply failure has rendered STIS inoperable since August 2004.


Days 9-12 - Release of Hubble and preparation for return

One final act the crew will perform is to attach a "deorbiting" mechanism that, on command, will bring Hubble down "safely" after its mission is complete (nominally 2014).  That means Hubble will drop and burn up in our atmosphere.  If you ask me, Hubble's mission will only be complete when we decide to stop servicing it.  An "SM5" is difficult to imagine now as the space shuttles are slated to retire soon, but might we reconsider five years from now?  And while a Hubble replica has long been on display in the Smithsonian museum, I think many people would love to see the real Hubble in a museum someday.  Hubble has been adored by so many for so long that if I was the astronaut in charge of placing the kill switch on Hubble, I don't think I would be able to do it.
An Awful Waste of Space
More Articles All Articles
About