Hubble was "full of surprises" for the astronauts, and EVA 1 took an hour longer than planned, but the veteran space and ground crews overcame all obstacles and Servicing Mission 4 (SM4) remains right on schedule.  (See the full scheduled timeline in my previous post.)

The tensest moment came when a bolt refused to come loose on the old WFPC2 camera.  The stubborn instrument has worked faithfully for the past 16 years and perhaps was reluctant to surrender its post. 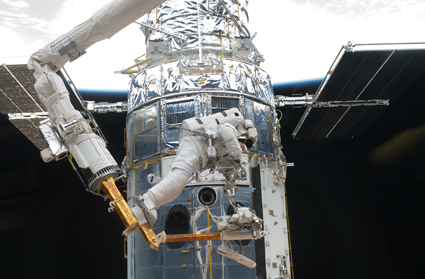 After astronauts struggled for a while, Mission Control finally proclaimed that failure to remove the bolt would result in the weathered WFPC2 remaining in the telescope leaving no place to install the new WFC3.

Seconds later, John Grunsfeld successfully torqued the bolt free rescuing that part of the mission from failure.  Surely failure was not an option for Grunsfeld, the astronomer turned veteran astronaut of Hubble servicing missions.

Grunsfeld and Feustel also installed a new Data Handling Unit, essential brains of Hubble in charge of sending instructions to Hubble's instruments and preparing data for transmission back to Earth.  Initial tests showed the unit was functioning properly.  The September 2008 failure of "Side A" of the Data Handling Unit resulting in the further postponement of SM4 from October 2008 until this past Monday.

A "soft capture unit" was also installed today which would allow a "deorbiter" launched in the future to attached to Hubble and bring it down to burn up in the atmosphere (a sad proposed fate for a national treasure).

Tomorrow astronauts will replace the six gyroscopes that control the telescope pointing.  For the past four years, Hubble has been limping along using only two gyros.  Other remaining tasks include installation of COS and repair of ACS and STIS.  (Click here for more details.)

Additional updates on the launch can be found on this NASA webpage.  And make sure to check out the cool power tools used by the astronauts!
An Awful Waste of Space
More Articles All Articles
About