Please observe the following unusual locomotive behavior which begins at around 55 seconds into this video – when Groucho Marx starts to run.

But Groucho was by no means the first to develop this unusual gait. Take, for example the Tinamou. It also performs Groucho Running, and presumably has done so for many thousands of years.

The trait has not remained under-investigated. A team from Ohio University, US, encouraged Tinamous to run on a treadmill whilst they were they were being filmed with a high speed camera (the Tinamous, not the researchers). Subsequent evaluations of the video showed that :

“Kinetic energy and gravitational potential energy fluctuate in phase across speeds ranging from 0.6 –2.7 m/s, and external mechanical energy recovery by inverted pendulum mechanisms is poor (generally_15%). These results are consistent with bouncing mechanics typical of runs, although video records illustrate a lack of an aerial phase. This suggests that tinamous are “Groucho running,” a gait best described for humans in which high limb compliance limits the elevation of the center mass at midstance.“ 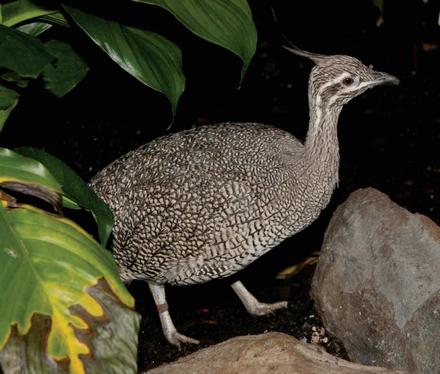 The details of the experiment were published the Journal of Morphology, 260(3):297. See:  “Groucho Running” in Tinamous. (Scroll to page page 24 in the .pdf)

* Note: The term's first appearance could well have been here, in the Journal of Applied Physiology, June 1, 1987.