“Under what conditions can we engage in a meaningful, expressive interaction with an electronic device?” Say, for example, by ‘tickling’ a robot?

This question is examined in a recent article by Patrizia Marti, assistant professor and senior lecturer at the Department of Communication Science, University of Siena, Siena, Italy, which features in the International Journal of Design. 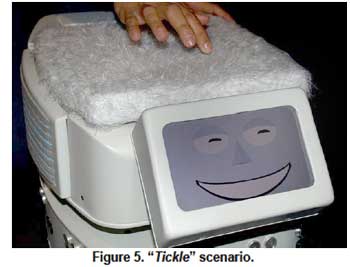 Marti’s article, entitled ‘Perceiving While Being Perceived‘ looks at the concept of ‘Shared Perception’ – beginning by examining the extent to which existent quasi-robotic tech sometimes lacks true interactivity.

In addition to the possibilities offered in making robotic tech more aware, a collaborative viewpoint can also be considered. In other words, asking not “What can the robot do for me?” but rather “ What can we do together?”

Thus, for example, can, or indeed should, a robot ‘know’ when it’s being tickled? To find out, the research team constructed a modular robot composed of a mobile platform, an application module and a number of additional components that modify the appearance and behaviour of the robot. (see picture above)

“The Tickle scenario is enabled by covered modules embedding smart materials. A pressure sensitive textile covering module was developed that fixes a soft woolen cover on top of two metallic and conductive layers separated by an isolating layer.” 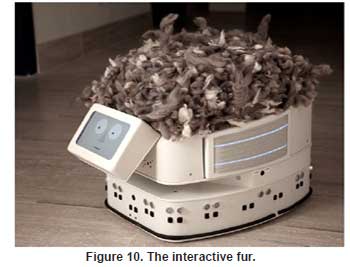 So forming an electronic switching matrix which is tickle-sensitive. The bot is not only tickle-aware, but can also follow users around – and later versions were equipped with microphones for voice sensing, and Interactive Fur, to facilitate robotic petting interaction. (see picture at right)

The paper also introduces a new concept which the author terms  ‘Perceptual Crossing’.

“According to this view, some of the mechanisms underlying the recognition of others as intentional entities are intrinsic to the shared perceptual activity – we perceive the others while being perceived. This mutual interdependency is a product of a perceptual crossing and is dynamics.”

And thus a tickle-aware, and/or perhaps furry robot might be able to go some way towards enhancing Perceptual Crossing potentiality.