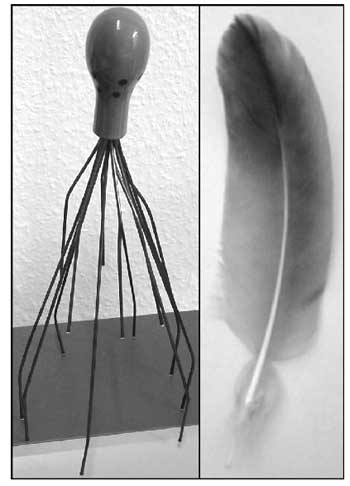 But in a new research project, investigators from Hanover University of Music and Drama (hmtmh) in Germany focused their attention not just on chills which are exclusively musically-induced, but also on those initiated by aural, visual, tactile, and taste stimulation.

A comprehensive set of experiments were devised to investigate.

Before the cross-modal inquiries could begin however, it was necessary to define (as closely as possible) exactly what a ‘chill’ is.

“Some authors have used the term chill or thrill in a wider sense and include other bodily experiences, such as tears or a funny feeling in the stomach. We define chills as goose bumps and shivers down the spine, and we explained them as such to all participants in our study”

Then the 36 experimental participants were exposed to:

Each participant was asked to log any ‘chill’ episodes (or so-called sub-chill occurrences) and at the same time they were monitored for physiological changes (heart-rate, skin conductance etc.). The results showed up marked differences in chill inducement potentials.

Perhaps disappointingly for musicologists, not even Ludwig van Beethoven and Phil Collins could compete against the Head Wizard™ and a feather [see pic. above] - the use of which prompted 31 out of 36 participants to report a chill.

Next came the sounds and music excerpts, which scored broadly the same, both eliciting chill reports from around one-third of the participants (sounds, however, showed a larger deviation in effectiveness).

The two sour juices resulted in chill reports from 25% of the participants.

Pictures were the least successful stimuli for chill induction. Even the most emotional stimuli from the IAPS library generated chill reports from just 10 participants.

But there was a further category of chill reports – ones which were induced without any external help at all. It was confirmed that they could be auto-induced by the participants, simply by the power of their imagination alone.

“Interestingly, chills were reported even without any external stimuli when participants recalled strong emotional events of both negative and positive valence.”

Despite these extensive new chill investigations, however, a full scientific description of their exact nature, causation and predictability remains elusive – but the set of experiments lead the university team to a suggestion (for future research).

“We would like to suggest that chills need to be used in combination with other emotion measurements. Accordingly, they could provide some interesting opportunities which, depending on the experimental setting, might offer new information in the complex and developing field of emotion research.”

Their paper : Chills in Different Sensory Domains: Frisson elicited by Acoustical, Visual, Tactile and Gustatory Stimuli is published in the journal Psychology of Music.