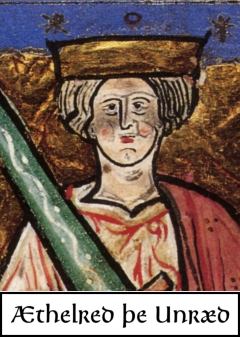 One of the few Anglo-Saxon kings whose name is still familiar is Æthelred the Unready.  To modern ears, this sounds as if he had ignored the Scout motto “Be Prepared”, but “Unready” is better translated; the Old English “Unræd” means, rather, “Ill-advised”. [1]

Now I am feeling as perplexed as the chap in the picture above, what with all the advice I receive, from home and abroad, about my diet.  This year, I seem to have developed a condition whereby too high a glycaemic load makes me itch or develop spots for an hour or so at a time.

One direction from which this comes concerns the Paleolithic Diet (more generally abbreviated to the Paleo Diet), which is

a modern nutritional plan based on the presumed ancient diet of wild plants and animals that various hominid species habitually consumed during the Paleolithic era—a period of about 2.5 million years which ended around 10,000 years ago with the development of agriculture and grain-based diets.

Now this has recently been given the going-over on Scientific American in an article How to Really Eat Like a Hunter-Gatherer, and I need not add to what is there.  However, there recently came into my hands The Perfect Health Diet by Paul Jaminet and Shou-Ching Jaminet, and I had a good read of it.

One of their ideas is the list of their “Four Most Dangerous Foods”, which are (1) Cereal Grains (2) Legumes (3) Vegetable Seed Oils (4) Sugar.  They seem to want to drive these out with inquisitorial ferocity.  And sometimes their logic seems to drive them into odd corners: they advise against eating plants favoured by herbivorous mammals, because the plants would have evolved chemical defences against being eaten!

Ruling out grains and legumes would be very hard for me, since I tend to rely on these for energy, rather than potatoes and rice with their higher glycaemic index.  And I do seem to need a lot of energy: I can eat more than most people and not put on any weight at all.  Also, when they talk about vegetable seed oils — there could be a world of difference between the stuff straight out of a bottle and what is found in a fryer that has been kept hot in a take-away for days on end.

The problem with this book is that they do seem to apply their one principle to everything, and ignore alternative interpretations of other people’s findings that they quote.  However, they do cover a lot of ground, and make me think, which is why, despite my misgivings, the book has not been a waste of money.  My favourite “goodie” is how they regard medium chain (saturated) fatty acids as being the best thing going, and I do wonder, how are these metabolized?  Apparently a lot of them end up as ketone bodies — are these good or bad for the normal healthy individual?

Another book I have read is

Nourishing Traditions: The Cookbook that Challenges Politically Correct Nutrition and the Diet Dictocrats by Sally Fallon

This is much more moderate, and their ideas of fermenting your grains and milk may make a lot more sense.  The book has lots of interesting recipes, and is beautifully produced (to a typographic eye.)

I am not a “foodie”, but if I ever manage a holiday in the United States of America, one of my guides would be not Baedeker, but Guy Fieri’s Diners, Drive-ins and Dives.  I would have to do a lot of travelling though, because I would want to fit in Southern food (collard greens and all) and some wonderful eateries in Fairbanks, Alaska.  However, one thing does make me wonder, and that is the tremendously long smoking times for pork and brisket.   I did wonder a tiny bit about the Maillard reaction, responsible for meat browning and the development of all sorts of flavours, but the linked Wikipedia article has nothing negative to say about it in that regard.  However, all that charring does make me suspect the presence of lots of polynuclear aromatic hydrocarbon derivatives.

Now we have ‘advice’ from Europe, which would limit our consumption of processed meat to one slice of bacon day: Europe-wide study reveals unhealthy effects of eating processed meat.  Vae nobis, we are getting so much advice on all sides.  In this respect, the European Union is developing into a Monstrosity [2], interfering in all matters of life.

Last of all, we turn to Nadia Giosia and her Bitchin’ Kitchen.  Easy, sensible stuff and not too hard to produce.  But she does lean too heavily, methinks, on organic produce and extra virgin olive oil.  Regarding organic, that has been nicely dealt with in the Hankroller, but what about the “extra virgin”?  Is one’s supermarket rapeseed oil (GB equivalent of canola) likely to be any poorer in omega-3 than the cold pressed stuff?

[1] or “bad-counsel” — a twist on his name “Æthelred”, meaning noble-counsel.  From 991 onwards, he paid tribute (Danegeld) to the Danish King, and in 1002, he ordered a massacre of Danish settlers.  In Oxford, a group of Danes who had taken refuge in a church were killed, reminding one of more recent incidents in Yugoslavia during the Second World War, and in Eldoret, Kenya.

[2] THE MONSTROSITY, by G.K.Chesterton

When a dead body is rotting, it does not diminish; it swells.  Ignorance of this elementary truth is at the back of nearly all our political blindness.  When we speak of a decaying people or a dying institution, we always have somehow the notion of their dwindling; of sparser and sparser tribes gathering on their mountains, of meaner and meaner buildings arising in their skies.  But it is not so that social bodies really rot.  They rot like physical bodies, being horribly distended from within by revolting gases demanding egress.  Institutions, like corpses, grow larger and larger as they grow more and more shapeless.  A dying monarchy is always one that has too much power, not too little; a dying religion always interferes more than it ought, not less.  Our own country is really in this state of swollen decay, and the test of it is this: that every function of the State has grown more formless and more vast.  Every power, public and private, has been stretched long past all sane definition and we live under a government of entangled exaggerations.  It is a government that has all the practical effects of anarchy.  Indeed, it is something worse than chaos; a warring polytheism.  It is a conflict of incalculable autocracies, under any of which at the moment we may fall.
===========================================================