Do plants have muscles?  Strictly speaking, no, but time-lapse photography shows that they can be quite thuggish in behaviour.

Following last year’s BBC TV series on Blooming Botany and writing five articles about it, (1A) (1B) (2) (3A) and (3B), yesterday (21st August 2012) I at last got round to visiting the Oxford Botanic Garden, armed with camera.

Some of the beds there are arranged according to their botanical families, others are (it seems) mainly for beauty, but in all of them each plant is put in with an informative label.  However, the plants have ideas of their own, and sometimes they grow so as to completely cover their label.

I was excited to come across a label Ephedra equisitina.  Ephedra has been on my map since my late teens, as one of the few types of non-coniferous gymnosperm, with Gnetum and Welwitschia in the same sub-class, as well as Ginkgo and cycads.  My first encounter with it, though, was at the age of nine when I was given Ephedrine as a treatment for nettle rash.

So this label suggests “Horsetail-like Ephedra”.  But looking at the plant behind it, that one seems far too horsetail-like to be anything but an Equisetum, indeed identical to the large clump growing a few yards away.  That one had completely covered its label, but I guess it was Equisetum telmateia, the Great Horsetail which grows in Oxfordshire as well as other places both sides of the North Atlantic.  These green shots are called “candocks”, and are purely vegetative: I would like to visit this plant next April to see the strange strobili which emerge in spring to produce the spores by which these plants reproduce. 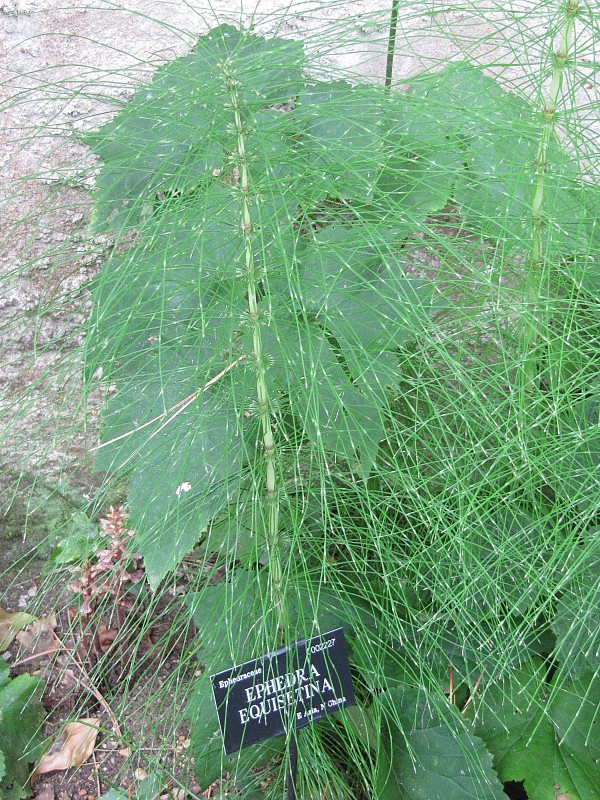 Next to it I found this, a rather scrubby horsetail growing in front of some broad leaves.  This, however, is Equisetum hyemale , the scouring rush. 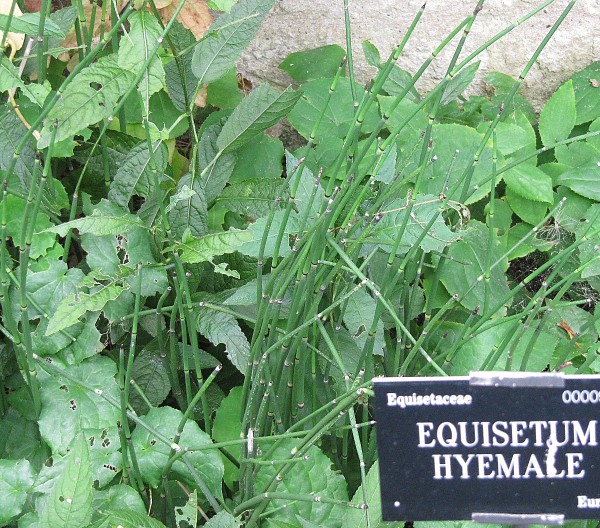 In front of the label, though, were these rather sad looking stems.  Close inspection of the “collars” around the stems shows that they are different to those of the nearby Equisetum hyemale, and comparing them with pictures on the web such as this one from Japan http://www.botanic.jp/plants-ka/kidama.htm one finds that the plant is indeed Ephedra equisitina.  Alas, there was no sign of the “flower-like cones” visible in the picture from Japan.  It makes an interesting contrast with the Equisetum proper, but I suspect that stuck close to a north-facing wall and partly overshadowed by a huge pine three, the plant is simply not thriving.  Maybe it should be found a more suitable home before its two aggressive neighbours muscle in on it. 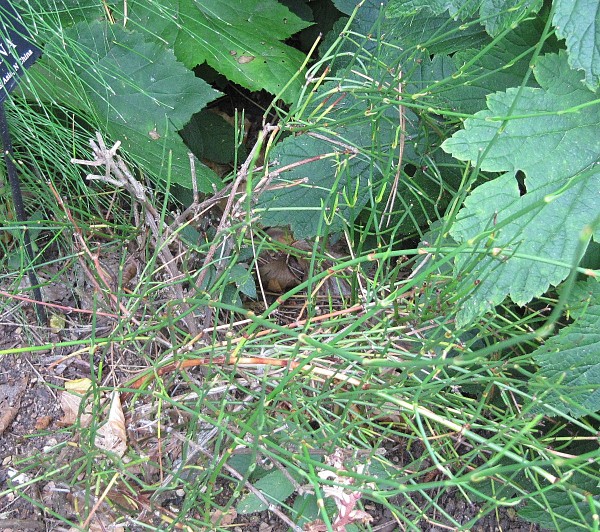 Back to the beds arranged by plant families.  One is dedicated to the Cucurbitaceae, the melon, cucumber and pumpkin family.  Here is a plant of Echinopepon wrightii, which comes from both sides of the border between Mexico and the USA, growing up a frame, with its maple-shaped leaves and small white flowers (to be followed by prickly fruits).  However, there are (arrowed) some heart shaped leaves and yellow flowers of Thladiantha dubia, a vigorous grower from northern China and southern Russia, which has naturalized in Europe and North America.  At Oxford it had also spread in the other direction and was starting to ramble through a Melianthus.  It seems to be quite a slender plant, but that’s no barrier to thuggery, as long as it can shade out the competition.  In my own garden the delicate, tracery-like leaves of the pretty blue annual Nigella are quite capable of sorting out most rivals for ground space. 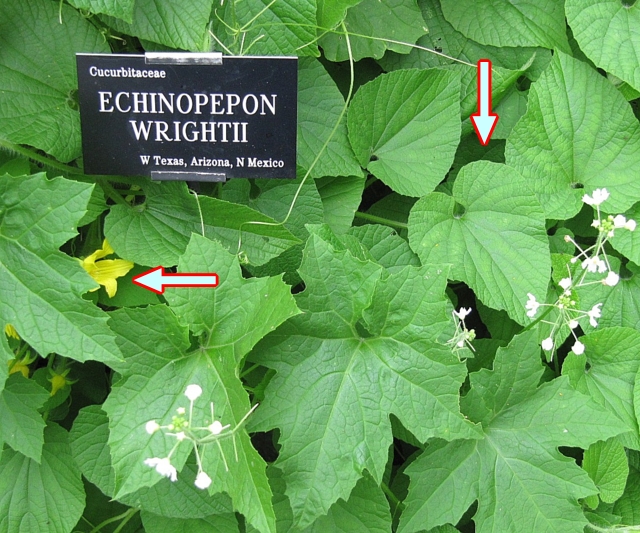 And just to show that I am not a total plant geek*, but that I do appreciate their beauty, here is a Tithonia or Mexican Sunflower, being visited by a hoverfly. 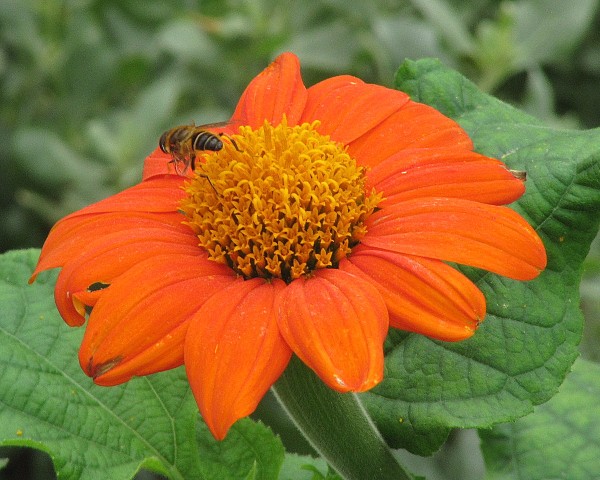 Inchworm, inchworm
Measuring the marigold
You and your arithmetic
You'll probably go far

Inchworm, inchworm
Measuring the marigold
Seems to me you’d stop and see
How beautiful they are