Robert H Olley
As a teenager, in the early 1960s, I developed an interest in botany, and in particular ferns and the so-called “fern-allies”.  So, living in the drier South-East of England, I welcomed trips to places where these plants about, such as Wales, mountainous Scotland, and Cornwall.

But today I am travelling through time, showing how our knowledge of this branch of the Plant Kingdom has expanded over the last 200 years or so.

In his system for classification of all known plants and animals, Carolus Linnaeus (1707–1778) divided the plant kingdom into 25 classes, one of which was the Cryptogamia. This included all plants with concealed reproductive organs.  He divided the Cryptogamia into four orders: Algae, Musci (bryophytes), Filices (ferns), and Fungi.

The name Cryptogam is from the Greek, meaning “hidden marriage”, and stands in contrast to the Phanerogams (Greek “visible marriage”), a grouping which covers the seed plants or Spermatophyta.  There is an irony in this nomenclature, which I will draw to your attention later.

Over the next two centuries, things moved on.  Land plants were classified together, while Algae (I know, some of those live on land) and Fungi came to be regarded as distinct sections of the Plant Kingdom.  Towards the end of the 20th Century, molecular phylogeny had led to the Fungi being assigned to a kingdom of their own.

The term cryptogam persisted well into the 20th Century, though, and had come to refer to those land plants which visibly reproduce by spores.  One section of these, the Bryophyta, included the Liverworts, Mosses, and Hornworts.  The other section, the Pteridophyta, consisted of three main groups, the Ferns, Horsetails, and Clubmosses, together with a few “odds and ends”.  There three big sections came to be known as “ferns and fern-allies”.  However, ‘Pteridophyta’ are vascular plants, and are  related rather to the conifers and flowering plants, so the term “cryptogam” lost any phylogenetic siginificance. 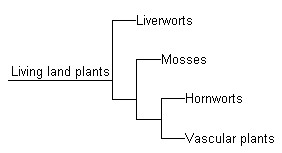 One thing that was obvious, though, with these cryptogams was the Alternation of Generations in their reproduction.  In this (as sayeth Wikipedia) a haploid gametophyte, each of whose cells contains a fixed number of unpaired chromosomes, gives rise to a diploid sporophyte, each of whose cells contains twice the number of paired chromosomes. Gametophytes produce sperm and eggs which fuse and grow into sporophytes. Sporophytes produce spores which grow into gametophytes.

Bryophytes are gametophyte dominant, meaning that the more prominent, longer-lived plant is the haploid gametophyte.  In the picture, the green tufts are the moss gametophytes, while the brown stems with brown or green capsules on top are the diploid sporophytes: the capsules are called sporangia.  These appear only occasionally and typically remain attached to and nutritionally dependent on the gametophyte. 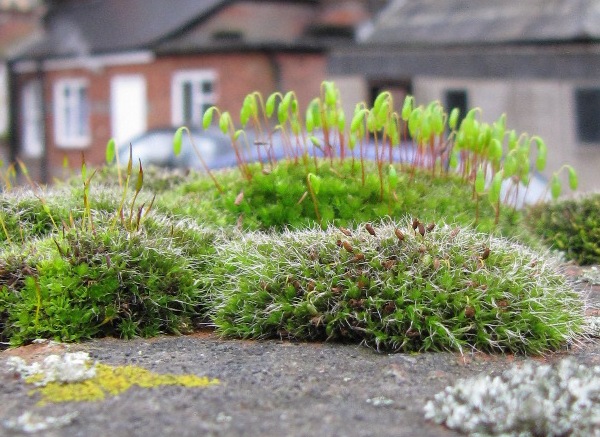 The gametophytes (whether tufty mosses or creeping liverworts) produce female archegonia and male antheridia. The latter produce flagellated sperm which must swim from antheridia to archegonia.

With the ferns and fern-allies, however, the sporophyte is dominant.  The next picture shows the back of a fern leaf covered in tiny capsules called sporangia.  Each of these contains many spores which are dispersed by the wind.  If they land in a damp place, they may germinate to produce a tiny green gametophyte called a prothallus, a few millimetres across and only a few cells thick.  The prothalli produce sex organs, and sperm swim towards eggs to produce a small plant which grows into the much bigger fern (or horsetail or clubmoss). 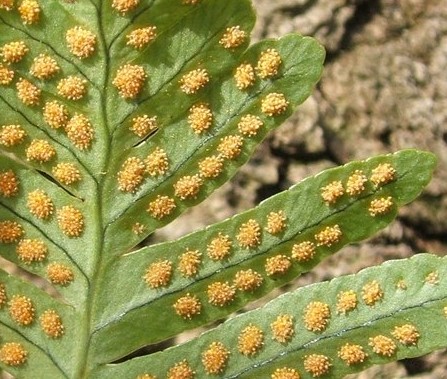 Here is a young Java Fern growing from its prothallus.

In the Carboniferous period, giant clubmosses and plants related to horsetails dominated the forests.  Here are two pictures of horsetail relatives from my 1871 palaeontology book: 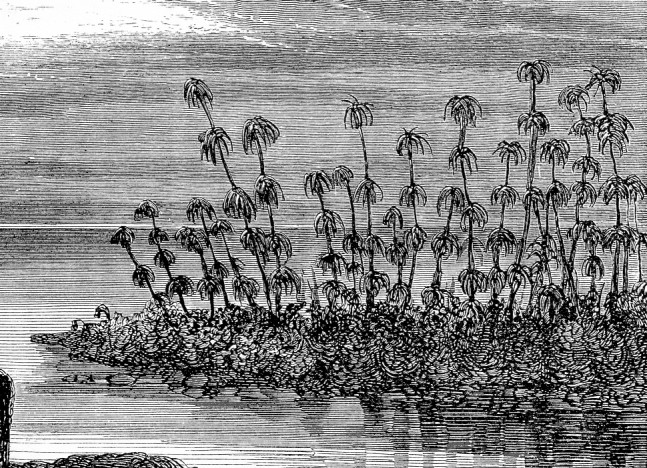 and Calamites from the Carboniferous.

After the Permian, the ferns continued to increase, and later, being spread by spores they manage to quickly recolonize land devasted by the K-T impact.  However the clubmosses declined to a few genera of small plants still around today, while the horsetail group became reduced to the single genus Equisetum.  What is of interest recently is that from the fossil record this is now a candidate for the oldest genus of living land plants.

And here it is, represented a few minutes from my home by Equisetum arvense, the Field Horsetail.  Before the introduction of Japanese Knotweed, this was perhaps the most invasive and difficult to remove of plants in Britain. The plant is dormant in winter, but in spring, pinkish-brown stems emerge carrying cones called strobili which produce the spores.  These quickly die off, and are followed by the green fan-like green shoots, just starting to emerge in the picture, which can completely cover a tract of land.

I used to think that clubmosses, ferns and horsetails were more or less equivalent branches of land plants, and that the vascular plants had developed from the ferns.  But modern phylogeny shows a much richer picture. 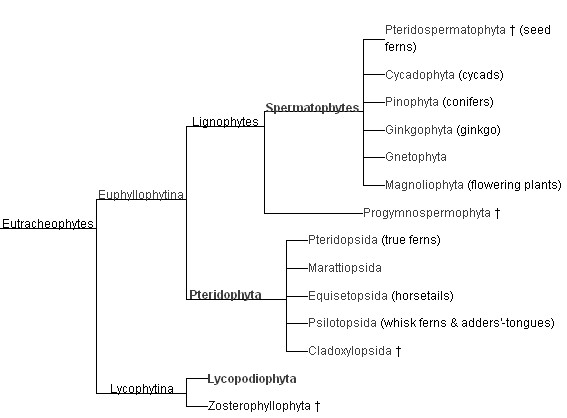 One final twist.  One may think that one sows, for example, a grain of cereal, which produces a big plant with ears contain grains, some to be kept for sowing the next year, and that this is one generation.  But conifers and flowering plants (including grasses) also reproduce by alternation of generations.  The main plants, for all the sexual show, are sporophytes.  Pollen grains are actually microspores, which produced tiny gametophytes in the form of pollen tubes which release sperm (although even these are much reduced compared to the free-swimming sperm of ferns and mosses.)  The ovules, sitting in cones or flowers, are small gameotophytes which produce single cells called megasporocytes.  And so while flowers can be really big and showy, they are really the “wedding party”.  The actual sexual parts of flowering plants are tiny indeed, and much more hidden than those of the “plants of the hidden marriage”.
Beamlines
More Articles All Articles
About