Boxing has been in the news lately, what with this young lady (Nicola Adams) becoming the world’s first female Olympic boxing champion.  So when I saw claws like the ones in the next picture two days ago, I immediately thought they might be used for combat, like the outsize claw of the male fiddler crab. 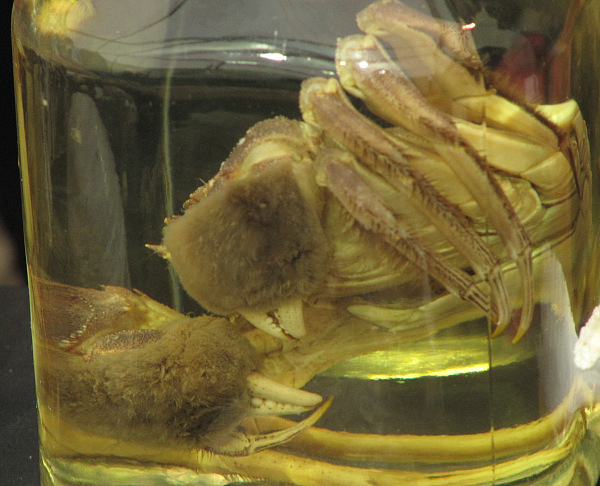 They belong to the Chinese mitten crab, its scientific name Eriocheir sinensis  meaning the “woolly handed one from China”.  In China it is known as the big sluice crab (大閘蟹; dà zhá xiè) or Shanghai hairy crab, (上海毛蟹; shànghǎi máo xiè), and unsurprisingly it is a local delicacy. 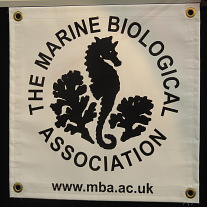 I was visiting the exhibition tent at the ASE (The Association for Science Education) Annual Conference 2013, and came across the stand of the Marine Biological Association of the UK.  Behind this remarkable display of shells, there were two jars, containing female (left) and male (right) Mitten Crabs. 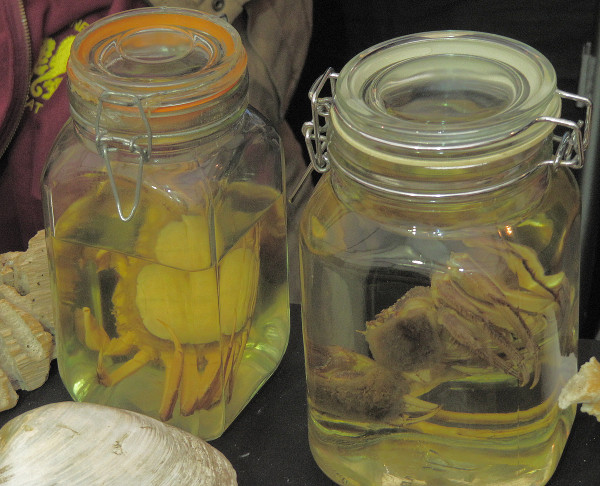 Alas, these crabs have got into Europe and North America, and are not only invasive but destructive.  In the River Thames they are burrowing away at the banks, and have a ferocious appetite for molluscs.  Now the Natural History Museum is on to the case, in a project to determine whether the crabs in the Thames are safe to eat.  Current studies aim to check levels of chemical contaminants in the crabs – if they receive a clean bill of health, the crabs could be commercially fished and sold in Asia.  Thus, in a curious twist, consumers of seafood may help to save our rivers.  Following this, one of our British newspapers, the Independent, is asking Will we soon be tucking into mitten crabs fresh from the Thames?  Their reporter Richard Sharp goes fishing, and finds that even small ones make a very nice soup.  The article has a picture gallery showing them being cooked and eaten.

The MBA and other bodies are, however, advising caution over this.  At a joint meeting of the Natural History Museum and the Linnean Society of London, both sides of the argument were put.  There does need to be control: not only is the Thames itself under threat; if numbers continue to multiply, larvae may find their way into shipping ballast water, and the species may be spread round our coast and even to other countries.

But if commercial fishing is allowed, other species may be reduced in the by-catch.  Particularly vulnerable is the European Eel, which used to be a great food of Londoners but is now severely threatened.  Breeding programmes have to overcome a number of hurdles, including the need for the fish (both sexes?) to be swum the equivalent of 6,500 kilometres (4,000 miles) in a hometrainer to mimic the Atlantic crossing.  Beyond that, if the fisheries are successful, rogue fishermen may introduce them to other waters, as happened with the signal crayfish.

However, no source I have found can say what the mittens are for.  So the boxing ring may not be the war of the sexes between those two in the jars, or even males in territorial fight.  An item BBC News – Alien ‘thugs’ set to meet suggests that as the Mitten Crabs spread, they may soon encounter the aggressive and invasive Signal Crayfish.  This picture suggests that the two handlers are about to engage a sport that would draw unwelcome attention from the RSPCA.  But the Big Fight will be between the two species themselves.