A Star that seems Brighter when Eclipsed

This paradoxical phenomenon was brought to my attention by a recent article in Physics World.  Quite an informative article, but like some bard of old, with legendary tales of kings and heroes, I would like to tell it as a story, in three episodes. 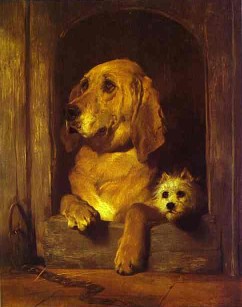 Let us start our journey in the Tate Gallery, London.  The  painting to right is the well-loved Dignity and Impudence by Sir Edwin Henry Landseer (1802–1873), featuring a bloodhound and a West Highland terrier (more detail here).  Not being an artistic sort of chap, though, I might never have known of it but for my interest in astronomy.

In the years around 1960, when as a teenager I was busily soaking up science, I did not have access to the latest research.  Most of my science books were at least a few years out of date, and library collections contained books even older, many of them pre-war.  One we had at home was The Stars in their Courses (1931), by Sir James Hopwood Jeans (1877-1946).  Here is an example of his elegant prose, which has stuck in my mind over tens of years:

. . . A typical example is the star Betelgeux, or Alpha Orionis, which is 25 million times as big as the sun, although probably containing only about forty times as much substance.  A still larger example is Omicron Ceti, which is so large that 30 million suns could be packed inside it. This has been recently found to have a faint companion in the shape of a white dwarf, the two together forming a binary system. If the stars had a sense of humour, this ill-assorted pair ought to create some merriment by their absurd incongruity and inequality of size.

Landseer’s “Dignity and Impudence” is quite outdone; it is as though an elephant and a sandfly were to join hands and travel about through space in one another’s company.

Omicron Ceti is much better known by its common name Mira, meaning “the Wonderful”, given in 1662 (Observation history).  Over a period of about eleven months, it cycles in brightness between being easily seen by the naked eye to being invisible in binoculars.  From northern temperate latitudes, Mira is generally not visible between late March and June due to its proximity to the Sun. This means that at times several years can pass without it appearing as a naked-eye object — and alas for us northerners, one such period is starting this year.  We won’t easily see it again until about 2018.

It was discovered in the early 20th Century that it is actually a double star.  What was seen up to then was only the “main” star, a red giant now known as Mira A.  Its white dwarf companion Mira B was only discovered in 1923.

However, much of the discussion of the nature of the stars, especially their evolution, was completely overturned in the years immediately following the end of WW2.  Fundamental to this was the working out of stellar nucleosynthesis (much too long to go into here.)  In the case of Mira, this means that what we see today is far from how the two stars started out.

The theory dictates, then, that originally Mira B was the “big boy”.  The two stars would have started out with Mira B being “Dignity the Bloodhound”, outshining what is now Mira A which would have been “Impudence the Terrier”.  If, say, Mira B started out about twice as massive as A, it would have then burned about 10 times as bright, and gone through its stellar life-cycle in a much shorter time.  It would have swelled up into a red giant even bigger than A, sloughed off most of its mass in a stellar wind, and its core, still hot from the thermonuclear reactions which had died out, would remain exposed as the white dwarf we see today.  Mira A has now used up most of its hydrogen, and will soon – by stellar standards – breathe off the rest of its atmosphere leaving the core as an another white dwarf, less massive but paradoxically larger in volume than Mira B.

There is another famous variable star, one which seems to have been known in antiquity.  This is Algol, from the second part of its Arabic name Ra’s al-Ghūl  رأس الغول meaning “Head of the Ghoul”, the English word coming directly from the Arabic.  But this is a variable of a very different type.  Mira is one of those stars which pulsates, but Algol is made up of two stars in close orbit.  Because we view them through the orbital plane, one star and then the other eclipses its companion over a period of 68.8 hours, a little bit under 3 days.  Here is a description of what happens, taken from the University of Illinois, from where the graph of the light curve comes. 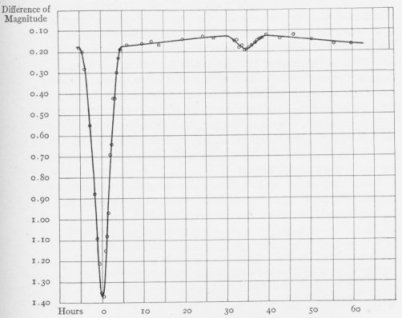 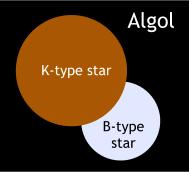 Each orbit, when the dimmer, larger K star passes in front of the brighter B star, we see a deep eclipse. The eclipse is only partial, some of the light of the principal component still shining brightly through. Between the deep “primary” eclipses is a smaller dip when the bright star passes partially in front of the dim one.

The eclipses of Algol were first accurately recorded photoelectrically around 1910 with the historic 12-inch refractor at the University of Illinois Observatory. The magnitude scale does not reflect actual visual magnitudes. The primary eclipse at left occurs when the bright class B star partially hides behind the cool K star. The brightness of the system then changes slightly out of eclipse because of the tidal distortion of the stars and the reflection of the B star’s light from the K star. Thirty hours after the primary eclipse, the smaller B star passes in front of the K star and cuts out a portion of its light to create the secondary eclipse at center. Light curve by Joel Stebbins in the Astrophysical Journal, vol. 32, p. 185, 1910.

There has been a lot of recent excitement over Kepler-186f: An Earth-Sized Planet In A Habitable Zone.  This is one of the latest discoveries by the Kepler Spacecraft, which searches for exoplanets by observing the dimming in a star’s brightness which occurs when its disk is blocked by one of its planets passing in front of it.  This is a very sensitive measurement — the Earth passing in front of the Sun would only cut out 84 parts per million of our own star’s light.  The name of the spacecraft is well chosen, because the great astronomer Johannes Kepler was the first to predict a transit of Venus which would occur in 1631.  Alas that one was not visible from Europe, occurring at the wrong time of day, so the first one actually observed was recorded by Jeremiah Horrocks in 1639.  (Similarly, observing the 1769 transit was one of the objectives of the first voyage of James Cook, which was accomplished at Tahiti.)

Here is the 2012 transit observed by the Japanese Hinode orbiting solar observatory.  The ring around Venus is due to atmospheric refraction, a similar phenomenon to that which causes the red colour of total lunar eclipses, where the Earth’s atmosphere bends the Sun’s light around our planet and reddening it like the sky at sunrise of sunset. So what is this then?

KOI 3278 consists of a G-type star very similar to the Sun in mass and luminosity, with a white dwarf companion.

Since posting the first version of this story, a nice write-up by News Staff has appeared here: Self-Lensing Binary System And The Upside-Down Planet.

However one thing in the original paper still remains to be told, which is how Kruse and Agol have also discussed the evolution of the system.  Like in our discussion of Mira, the white dwarf will have originally been the bigger star, and will have previously gone through a red giant phase.  They estimate that the two stars were originally much further apart, and at its largest, the outer atmosphere of the red giant would have reached out to its companion.  This would have given rise to drag, so that the smaller star would have slowed down and moved considerably nearer to the larger on than it was originally.  During this process, they estimate that it would have accreted some of the enveloping gas from the giant, between one 1/1000 and 1/100 of its own mass.  One sign of this is that it is now spinning faster than one would expect for such a comparatively old star.

Such a system, with a transiting white dwarf, is so far unique to observation.  If the authors manage to obtain the Hubble data they are now looking for, this should be another nice test of General Relativity. But . . .

One of the commenters on the Physics World article suggested that this could be due to Newtonian gravitation.  Now my own understanding is that if it were Newtonian gravitation operating, there would be bending, but differing in magnitude by a factor of 2 (multiply or divide, I can’t remember which.)  But the commenter in question seems to be out to discredit Einstein.

So regarding the factor of 2 (or not), could any readers please enlighten me?

I hope you have enjoyed my exercise in story-telling.  (Picture to right: The Storyteller by William Collins, 1843.)  Maybe science comes over better told round the fire in a smithy on a cold winter’s night, as in this Welsh nursery rhyme below, Migldi Magldi (said to be onomatopoeic for the sound of the blacksmith’s hammer striking the piece being worked.)

And here is a lovely rendition by Cerys Matthews, live on the London Eye: