Robert H Olley
Recently on Countryfile (BBC) we saw a presenter and a photographer together in the Pennines, the mountains that form the ‘backbone’ of England.  The photographer makes a living by taking spectacular scenes with a high-end camera and all different lenses, whereas the presenter was comparing what she took with her mobile.

He was worried that in the public domain the best images would be lost in a massive cloud which includes a lot of inferior (though he didn’t specifically use the word) data.

This clicked with me, because of my experience of attempting astrophotography with what is known as a ‘bridge’ camera, somewhat between a compact and an SLR.

For years I have not understood why the nebula M42 in Orion never appeared through binoculars anything like the pictures in books.  Having bought a Canon Powershot SX200 IS, I was building up a collection of astronomical photographs [1], including images of our cratered Moon and the Galilean moons of Jupiter better than anything I could make out with binoculars

Prompted by watching The Sky at Night (BBC) shortly before Christmas last year, I would out and took some photographs of the tip of Orion’s sword.  On the left is what I got, with stars down to about 9th magnitude just visible.  Many of these I identified using the program Stellarium.  Not much nebulosity visible, except a little bit of hydrogen-red around the star Theta-1, which a modest telescope will resolve as the famous Trapezium Cluster, which contains four main stars, three of which were observed by Galileo: the description by Jim Kaler shows that the brightest of the four main stars, and probably the other three, are massive and hot enough to be what I call “blue blasters”, which will eventually go supernova.

The image to the right is a cut-out from La gran nebulosa de Orión, La Cañada 23-nov-2013 (Wikimedia) taken in Spain by Juan Lacruz, and which must have employed a DSLR camera.  Quite probably, he used a much longer exposure with an equatorial tracking mount.  Not only are the individual stars brighter, and many more are seen, but the nebulosity is much clearer and its shape and extent are like the pictures one sees in books.

I thought I might be able to get around the difficulties by taking many pictures, and combining them.  But even doing this with an effectively stationary target like the Pole Star, there seemed to be little gain in how faint a star I could observe.  So what are limitations? 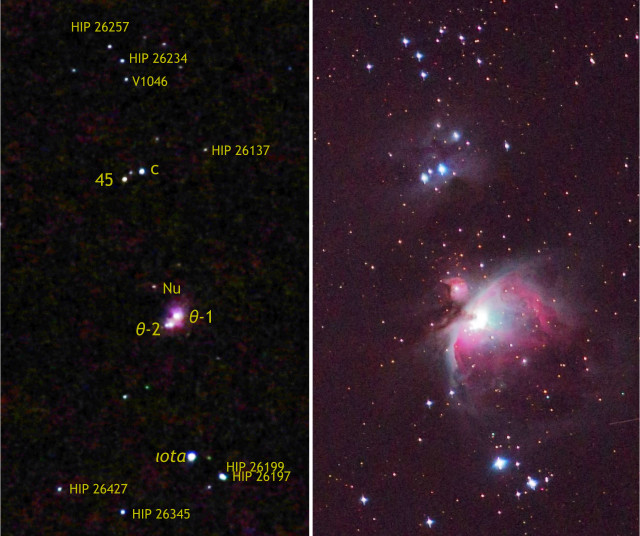 The bottom band shows a strip from each picture, with its tone curve adjusted to amplify the background noise.  The background to the picture from Spain is much smoother, but more important, much less pronounced in relation to the stars.  I wondered, could it simply be that my location has much greater light pollution?

About a month ago, it seemed that my camera might be having a problem with its image stabilization, so I started to look into the possibility of a replacement.  But which — bridge or DSLR?  The bridge cameras come with a much greater specified zoom factor, so it might seem a no-brainer, but I still wasn’t quite convinced.  Then I found the YouTube which I’ve included at the end of this article, and (more or less) all was explained.

What I learned from that video is that the greater zoom is achieved by the bridge camera having a much smaller image capture area with the pixels packed much closer.  So pointing at the Moon, I can get it to occupy a large part of the picture with many pixels, inside the small white rectangle in the picture below.  That’s not much of a problem with a bright object like the Moon, but difficulty arises when looking at a star-field because much less light is captured compared with the wide sensor of the DSLR, which could be as big as an old 35mm film picture. 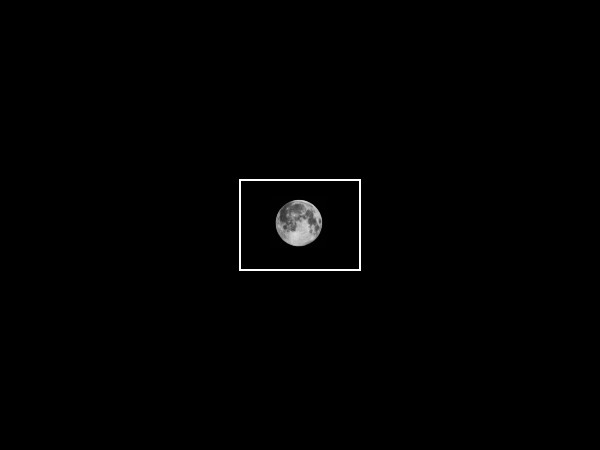 Glad to say, though, if there was indeed an image stabilization problem (perhaps due to an attempt of mine to clean the lens after it got mucky) it has not proved serious.  But if I have to replace the camera, and were to opt for an SLR, then I would have to carry around loads of lenses — even a 500 mm mirror lens would not get the zoom factor I have at present.  But carrying so much apparatus would be far too clumsy for me.

But not to worry about that for the time being.  Even so, I hope this may be of interest to anyone thinking of buying a camera, or simply wanting to know what goes on inside.  As for the mobile, that must be a tiny sensor indeed, so perhaps easier to download an app which tells what part of the sky you are pointing at.