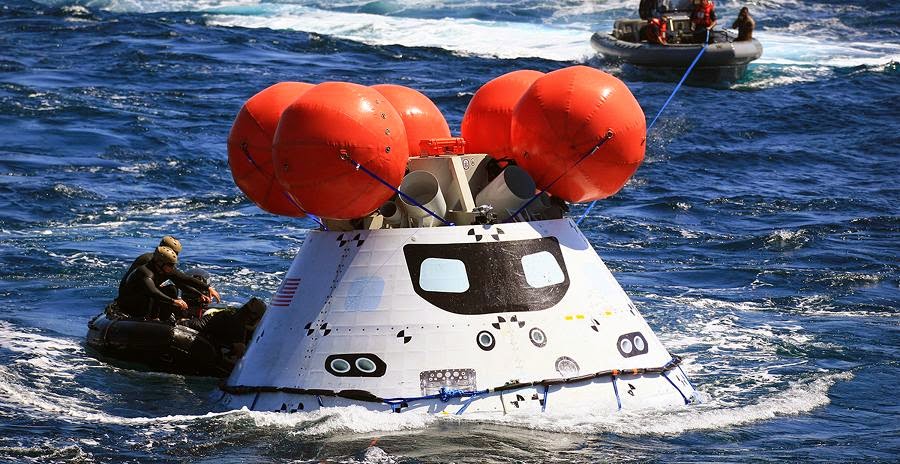 The highly anticipated maiden flight of NASA's next-generation Orion spacecraft is just hours away. Orion is slated to lift off Thursday, igniting a chase for America's dream of space exploration where no human has ever been, just like in 1969, setting foot on the Moon. Now, it's a start for a journey far beyond, to Mars via asteroids, and to recover space pioneering aspirations. But before reaching other worlds, much work must be done, a series of test to get Orion in shape for future spaceflight assignments. The key task is returning astronauts down to Earth safely, without any difficulties. The spacecraft's journey, ending in a splashdown in the ocean is the moment of truth for every space mission. U.S. Navy teams awaiting this crucial moment to recover the space capsule and also astronauts in the future, are truly recovering America's space-bound ambitions.

Orion will launch at 7:05 a.m. EST, on Dec. 4, aboard a United Launch Alliance (ULA) Delta IV Heavy rocket from Cape Canaveral Air Force Station in Florida. It will travel 3,600 miles into Earth’s orbit and then return to Earth at a speed of approximately 20,000 mph. The spacecraft will splashdown in the Pacific Ocean, about 600 miles south of San Diego, California.

Before Orion launches on its flight test from Cape Canaveral Air Force Station in Flroida, the integrated team will embark aboard two ships, the U.S. Navy’s amphibious ship, the USS Anchorage, and the Navy’s salvage ship, the USNS Salvor, on the West Coast to prepare for Orion’s recovery. The team is made up of U.S. Navy amphibious specialists, engineers and technicians from NASA’s Ground Systems Development and Operations (GSDO) program at the agency’s Kennedy Space Center in Florida, Johnson Space Center in Houston, and Lockheed Martin Space Operations.

While the team waits for Orion to take flight, it will launch weather balloons from the deck of the Anchorage and monitor sea conditions. Before Orion’s splashdown in the Pacific Ocean, helicopters will take off from the Anchorage’sdeck and fly out to help locate Orion as it makes its descent toward the ocean. After Orion’s splashdown, the team will recover the crew module and attempt to recover hardware that was jettisoned, including the forward bay cover and parachutes.

U.S. Navy divers in Zodiac boats will check for any hazards around Orion. Then they will attach a sea anchor, load-distributing collar and tether lines to the crew module, and work to guide it to the ship’s well deck. The crew module will be winched into the flooded well deck of the USS Anchorage and placed on rubber shock absorbers. Water will be drained from the well deck, leaving Orion secure and dry. Once the ship starts the journey back to shore and reaches calm waters, the crew module then will be placed into its recovery cradle and readied for offloading.

The USNS Salvor and rigid-hull inflatable boats will be used to secure and recover Orion’s forward bay cover and parachutes. The Salvor’s cranes will be used to lift the forward bay cover and parachutes onto the ship deck. The crew module and jettisoned hardware will be transported from the landing site to a pier at the U.S. Naval Base San Diego. After the crew module is secured in the recovery transportation fixture, nicknamed the Armadillo, the Orion crew module and hardware will be transported by truck to Kennedy, where the crew module will be prepared for use in Orion’s Ascent Abort-2 test.

"Navy ships are unique platforms with a combination of capabilities especially suited to help NASA recover EFT-1. For example, amphibious ships have a well-deck, medical facilities, embarked helicopters, 3-D air search radar and small boats such as zodiacs or rigid-hulled inflatable boats (RHIBS) that can all be used in the recovery of the crew module," Irish said. "The recovery procedures are very similar to procedures the ships already use with amphibious craft. USNS Salvor is also underway to support NASA recovery efforts. She is equipped with a 40-ton aft boom crane that is ideal for lifting the recovered capsule out of the water onto the ship's deck. In addition, the ship is equipped with a towing bollard that can pull 120,000 pounds. USNS Salvor may serve as the recovery ship if the sea state does not permit USS Anchorage to recover the module. There are no comparable platforms or capabilities outside the Navy."

The U.S. Navy has a vast experience in recovering NASA spacecrafts. "The Navy was also instrumental in the recovery of Apollo during that program," said Brandi Dean, NASA spokesperson. Now, nearly 50 years of experience will come in handy and will be critical for Orion and future manned space missions.