No, this is not an exasperated exclamation by Captain Haddock, but might well be a shout of surprise at learning that Canadians have been searching for compounds of that nature in these snowy animals.  But why should Scott Mabury and his group at the University of Toronto be looking for them?

The simple answer is that they are terribly persistent in the environment.  Bit odd, one might link, considering that Fluorine is the most reactive of all the elements in the periodic table.  So reactive[1], in fact, that

Pure fluorine gas may be stored in steel cylinders where the inside surface is passivated by a metal fluoride layer that resists further attack.  Passivated steel will withstand fluorine provided the temperature is kept below 200°C. Above that temperature, nickel is required. Regulator valves are made of nickel. Fluorine piping is generally made of nickel or Monel (nickel-copper alloy).

Because of this, it took a long time to discover.  Eventually, after 74 years of effort by other chemists, in 1886 Henri Moissan reported the isolation of elemental fluorine.  How did he handle it? Especially in view of the fact that:

Care must be taken to passivate all surfaces frequently and to exclude any water or greases. In the laboratory, fluorine gas can be used in glass tubing provided the pressure is low and moisture is excluded.

In order to catch the element, Moissan had constructed especially corrosion-resistant equipment: containers crafted from a mixture of platinum and iridium (more resistant to fluorine than pure platinum) with fluorite stoppers.

Indeed, it will even react with the higher members of the so-called Noble Gases, which has prompted comparisons with male aristocrats consorting with a promiscuous woman.  However, the latter is not quite fair to fluorine, since when she joins up with carbon, the carbon-fluorine bond is very strong and very stable, perhaps deserving this verse from Velvet Underground:

The element took a great leap forward with the accidental discovery of PTFE in 1938.  The strength of the C—F bonds makes it very resistant to chemical attack.  I first read about it as a wonderful new insulator in Radio Constructor around 1960, which said that it was resistant to all chemicals but molten sodium and fluorine gas.  Its mechanical properties also make it a good sealant, an early use being for valves and seals with uranium hexafluoride in the Manhattan Project.

PTFE (Teflon) really came to town when DuPont started marketing it shortly after WW2.  Because of its resistance to degradation, I suspect it may be found fossilized for millions of years to come.  Because of its use in non-stick cookware, it has also become a byword for politicians to whom it is very difficult to make any allegation stick, such as the former Irish Prime Minister Bertie Ahern, known as the Teflon Taoiseach.

However, it is not with PTFE itself that this article is mainly concerned, but with related fluorine compounds such as Perfluorooctanoic acid (PFOA) which, in the form of its ammonium salt, is used as a surfactant in the emulsion polymerization of PTFE, and has been detected in some PTFE products.  These get into the environment, and can be taken up into the food chain.

It is, indeed, something of a super-surfactant.  We know from childhood (I hope) that oil and water don’t mix.  To explain this roughly, liquids have a property that chemists loosely call polarity.  Water is the most highly polar liquid we commonly encounter, while petroleum products such as paraffin (kerosene) and petrol (gasoline) are generally regarded as non-polar.  If two liquids are too far apart on the polarity scale, they won’t mix.

Now take the similar-looking beastie on the right, Perfluorooctanesulfonic acid (PFOS).  The SO3H group at the end is highly polar, while the fluorinated chain is, in effect, super-non-polar.  This gives it a wide range of technological applications[3], for example in fire-fighting foam.  Alas:

In May 2006 Three Valleys Water (in the South of England) announced that it had detected PFOS in a ground water bore hole close to the site of the Buncefield Fire.  It stated that no water from this well entered the public water supply and that a nearby well and pumping station had been closed since the fire as a precaution.

By this time the toxicological properties of PFOA and PFOS were widely realized, and governmental measures were being taken towards restricting their use and environmental containment. 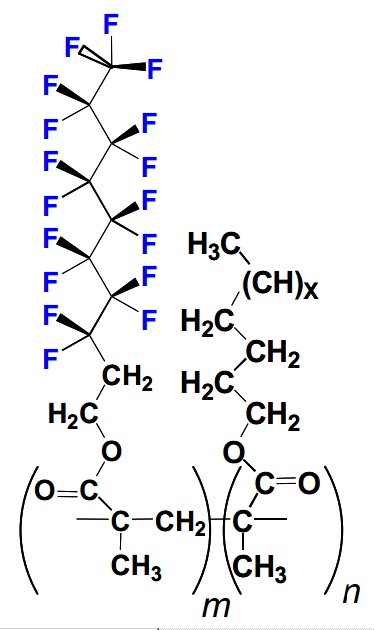 But worse is to come.  Most widely used are Fluorotelomers, which are used fire-fighting foams, grease-resistant food packaging, leather protectants, stain-resistant carpeting and textiles, and personal care products.  The picture to right shows a typical molecular formula, from the PhD thesis of Amila O. De Silva, of the Mabury (Toronto) group.

PFOA is also formed as an unintended by-product in the production of fluorotelomers and is thus present in finished goods treated with fluorotelomers, including those intended for food contact. In an U.S. Food and Drug Administration (USFDA) study, fluorotelomer-based paper coatings (which can be applied to food contact paper in the concentration range of 0.4%) were found to contain 88,000–160,000 parts per billion PFOA, while microwave popcorn bags contained 6–290 parts per billion PFOA.

And it is this sort of usage and environmental spread that the Canadians have been after.  But — one big problem.  These things are everywhere, even in the packaging of the laboratory apparatus you are intending to use for the analysis, in probably far greater concentration than one would expect to find in a polar bear.  So they had to build a special clean lab, at a cost of C$ 1.3 million.  And urgently too, since in addition to arctic specimens, they had just received blood samples spanning 30 years from the German Environmental Specimen Bank.  Even the (arguably) most environmentally conscious country in the world cannot escape these things! 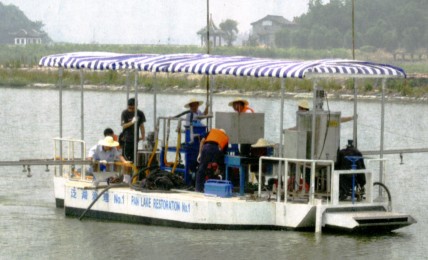 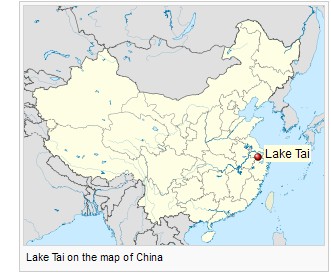 It’s not only the Canadians who are in on this.  This may look a bit like one of the boats used for centuries to ferry tons of Chinese porcelain across Poyang Lake[4], but it is of modern construction and is loaded with scientific equipment.  The craft is Pan Lake Restoration No.1, used by the Lake Restoration & Molecular Environmental Science Group of Gang Pan, based in Beijing, here operating on the Taihu Lake.  Apart from searching for fluorinated residues, a big interest is dealing with toxic algal blooms.

When I were a lad, one had the idea that poisonous chemicals were generally either based on ‘strange’ elements like arsenic, or else complicated organic molecules with reactive groups.  Things like perfluorinated compounds were so inert, that one thought ‘what harm could they do?’  Alas, nature is much more subtle than that, as experience with the ‘unreactive’ PCBs used in transformer oil has shown.

Anyway, there are two bits of good news.  First is that, since controls on perfluorinated compounds have been in place, (3M abandoned their use in 2002), concentrations in human blood samples have been steadily decreasing.

Secondly, industry is moving on to using compounds with shorter fluorinated sequences interrupted by an oxygen atom to form an ether, as in this schematic:

These materials can be attacked at the ether linkage, giving smaller molecules which can be destroyed in the environment much more quickly.  At least, that’s the theory, but ongoing vigilance is required to make sure we haven’t jumped out of the frying pan into an unsuspected fire.

[1] Its reactivity is due to the fluorine-fluorine bond being very weak, and so easily split apart and delivering a lot of energy when the F atoms react with something else.

[2] which recently was used in an earworm of a UK advert for a Far Eastern make of car.

[3] PFOS and the related compound include perfluorooctanesulfonamide were formerly used in Scotchgard.

[4] Those boats were tough.  Fierce and sudden winds were a hazard, just as on the Sea of Galilee.
Beamlines
More Articles All Articles
About