When is a Metal not a metal?  At high pressure, of course!

When I was a lad, we used to measure pressure in bars.  The adoption of the metric system entailed two advantages almost as ‘freebies’, one being that reasonably near sea level the weight of a 1 m2 column of air would be about 100 kilonewtons.  So one could define the unit of atmospheric pressure as the bar, namely 1,000,000 dynes per square centimeter.  This we encounter daily in our weather charts, with their lines all close to 1000 mbar.  These are not SI units, but they are accepted for use with the SI.

(The other convenience is that the acceleration die to gravity at the Earth’s surface, g = 9.8 m/s2, which is near enough 10 for a rough calculation.)

We were interested in high pressure, because of the newly discovered hexagonal phase of polyethylene.  We were studying it in a colossal high-pressure cell used for annealing diamonds, but with that one could only extract the samples at atmospheric pressure after a run was completed.  In 1970s, the head of our group, David Bassett, went across to the USA to use one of them new-fangled diamond anvil gadgets. 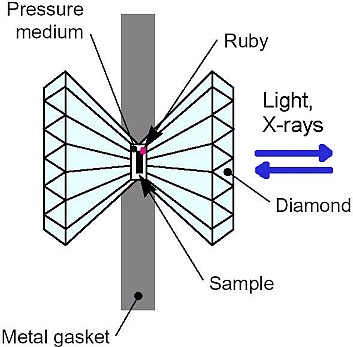 The word bar derives from the Greek barys/βαρυς meaning 'heavy', as does the word ‘barometer’ and also Barosaurus[1]

And with our own diamond anvil, as well as our specially built hydraulic press, we were subjecting polyethylene to pressure of 5 kilobars.

But it started to appear that bars are for softies, and gigapascals (GPa) are where it’s at.  A friendly page from Northwestern University allows me to calculate that 5 kbar is equivalent to about 15 km down in the Earth’s crust.  Indeed, towards the 1990s, and we started thinking about our polyethylene pressures as 500 megapascals (MPa).

But what if you want to look at conditions deep down in the mantle?  Down where the Earth’s mantle meets the core, the pressure (from seismic studies) is estimated to be around 136 GPa [2].  And at pressures like this, ‘simple’ metals can start to become non-metallic.

At the Center for Quantum Science and Technology under Extreme Conditions, Osaka University,  T. Matsuoka and K. Shimizu have been squashing the lightest, and supposedly the simplest metal, namely lithium, in a diamond anvil cell that exceeds specifications that we could ever have dreamed of.  They didn’t even need to go, in effect, right down to the core-mantle boundary before things changed drastically with lithium.

It had long been understood that lithium had a ‘simple’ electronic structure that could be well explained within the nearly-free-electron model.  But lithium does not stay ‘simple’ under such compression.  First-principles calculations had already suggested that, rather than becoming more free-electron-like as pressures increased, it would transform into a semi-metal or semiconductor.

Other experiments had already shown that dense lithium adopted low-symmetry structures, and that its resistivity did increase with pressure.  However, in this first direct monitoring of electrical resistance of lithium in a diamond anvil cell up to pressures of 105 GPa, they revealed a several thousand-fold jump in electrical resistance near 80 GPa, thus providing unambiguous experimental evidence for a pressure-induced metal-to-semiconductor transition in a ‘simple’ metallic element.

But the group that recently brought you ‘boron boride’ has gone even deeper into the Earth, reaching pressures of 200 GPa to bring you insulating sodium.  Here, in their diamond anvil cell, they observed sodium with light and X-rays (as we did with our polyethylene).  As this extreme pressure was reached, the sodium changed from being a reflective metal to an optically transparent insulator, underdoing about four phase transitions on the way, and getting compressed 5 times (which I understand to me one-fifth of its original volume).

Instead of the sodium consiting of ionic cores in a quantum sea of electrons (which gives the metal its conductivity), the ionic cores are interspersed with localized interstitial electron pairs, in analogy to electrides where the interstitial electron density maxima play the role of anions (the best known anions being the chloride ions in common salt.).  The authors say; “Dense insulating states such as reported here for Na may also be favoured in other elements and compounds when atomic cores are made to strongly overlap.”  So watch this (rather restricted) space.

[1] the name of a sauropod found in the Morrison Formation (centered in Wyoming and Colorado, with outcrops in surrounding states) from the Upper Jurassic Period, along with five other sauropods, Diplodocus, Apatosaurus (previously known as Brontosaurus), Camarasaurus, Brachiosaurus, and Haplocanthosaurus, as well as the familiar Allosaurus and Stegosaurus.