Every year, thousands of geology students descend on the tiny Isle of Arran in the inner Hebrides. Its unique in the way you have so many different rocks all crammed next to each other on one tiny island, and so has been host to generation after generation of 1st year geology students from all over britain. Visit Arran in the Easter and you will never be out of sight of either disgruntled (if it's raining) or sunburnt (if it's hot) students, staring confusedly at the rocks on the shore.

The question is: has the effect of all these students has taken its toll? Whilst there is an absolute ban on hammering of any sort, you can't ban touching things. Whilst the famous Arthropleura is destined to erode away as it is bashed by waves day in day out, there are many other trace fossils on the island that could be smoothed away by the actions of thousands of curious fingers every year. Obviously, nobody is doing deliberate damage, and more importantly, everyone realises the importance of the fossils. (Unlike the imbecile who defaced the neolithic deer drawing in the nearby King's caves...) 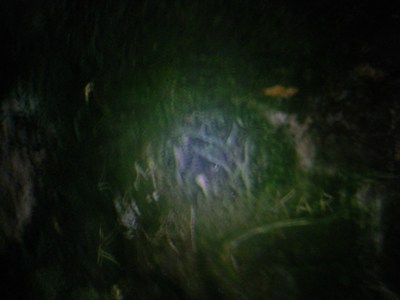 A famous trace fossil can be found near Blackwaterfoot on the isle of Arran , near a waterfall at the base of a cliff, where there is a famous footprint of a cretaceous crocodile-like reptile called Iso)cheirotherium. The fossil was discovered by Peder Aspen of Edinburgh university in 1993, but for the previous few years has been a regular stop for undergraduates of many universities on their 1st year field trip.

Cheirotherium was probably the size of a horse, and is named "hand-beast" because of its unusual "thumbs", which are on the outside of its hand. Whilst it has been suggested that it walked with its legs crossed (I mean, come on!) these things were actually little fifth fingers that helped spread its weight on soft sand. If you look to the right of the footprint in my photo, you'll see some small crack like patterns; these are desiccation cracks. So, the beast was walking over soft, slightly wet sand, that subsequently dried out, preserving the footprint. Scotland at the time was close to the equator and was mostly desertified at this, though this and small salt crystals show that there was some water around in patches.

About that footprint, then. The footprint is just about big enough to fit a hand, and the  thing is about at waist height. It must be one of the most touched trace fossils in the world, because of the minibus fulls of undergraduates (and increasingly, A-level students) that visit it day in, day out. 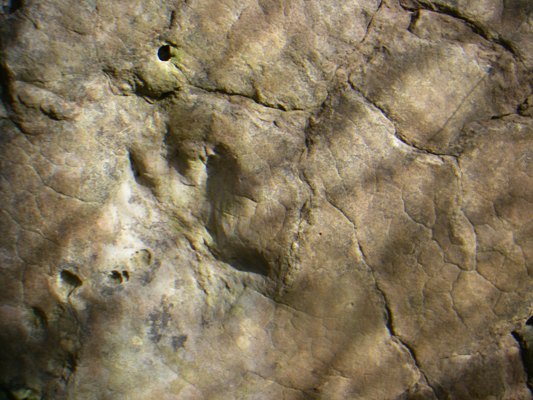 So, I thought I might start conduct that laziest and slowest experiment ever to see the effect of this "student abrasion". I plan to take a photo each year when I go back of this fossil to see how it is slowly degrading. At the moment, I have two data points: a photo from the 2009 paper and one that I took this year, which I've shown below. Not very impressive, admittedly. 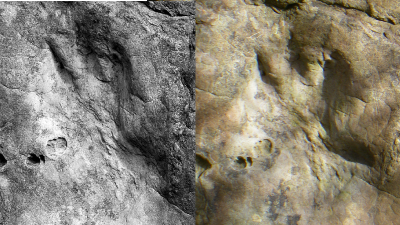 Obviously not much time has passed, but already you can see some smoothing over the posterior part of the fossil, and it will be interesting to see how this changes. Of course, if you are reading this and happen to have any photos of the fossil together with a date, that would be much appreciated. If not, check this blog in 40 years time and I'll have a robust dataset!