Oliver Knevitt
Every 6 months or so these days it feels like we find the earliest animal life. More often than not, said life is something ugly that turns up in a bucket after dissolving rocks in acid.

Well, it's been a while, but here is the latest candidate: 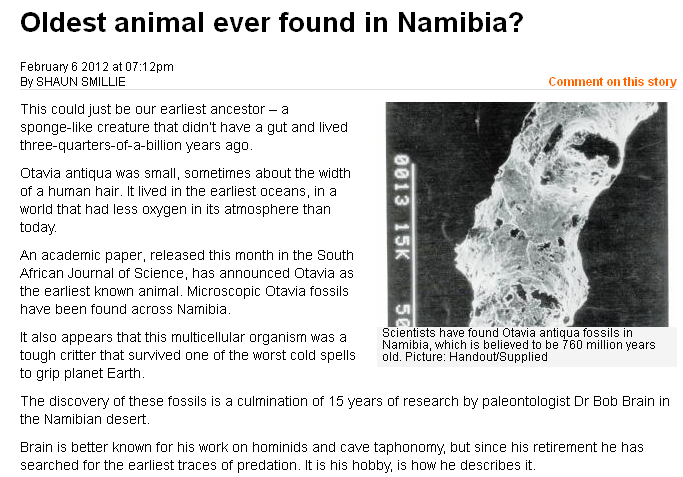 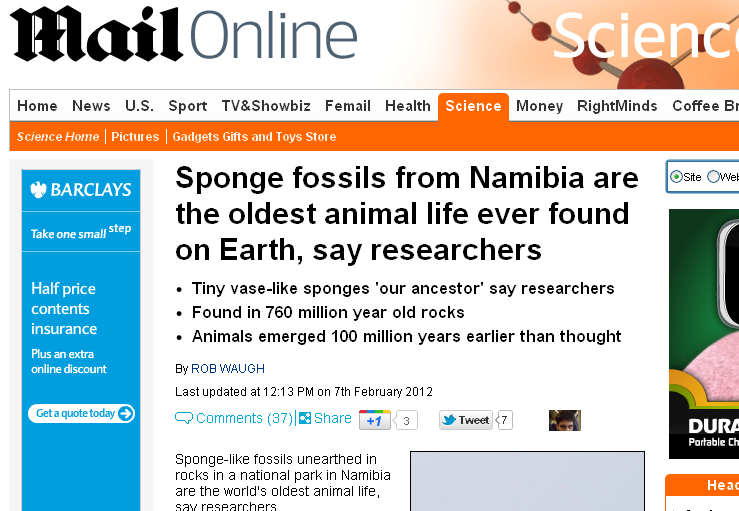 I'll comment on the fossils in a bit, but before I get there, I have to say that, this paper is not just dubious. It's really, pretty bad. I was just going to let this be water under the bridge when I heard about it an hour or so ago. But then, I googled it, and saw that, predictably, most of the major news outlets had picked it up. So I thought I'd post some quick comments before I go home for the evening.

You can find this paper in the South African Journal of Sciences (me neither). Here are the fossils-come-crud,

The first thing I want to raise is that I don't think that this has been reviewed. Under acknowledgments, there is an illustrious list of people who "provided helpful discussion" - what that constitutes who can tell - but no mention of any reviewers. This might go some way to explaining why the writing style is so odd; it really doesn't read like a normal paper. And so, I'd be pretty reticent to call this science.

Next, there is a glaring omission from this paper. The systematic paleontology. It is a prerequisite in a paleontology paper if you are creating a new taxon. How can you try and name a new species and a new genus without giving any clues as to diagnose it? Seriously, this is more than just an oversight - it's a gaping hole.

Those are the two biggies, but throughout there are little niggling things that really grate (like suggesting the thing could have had a skeleton composed of famously abiogenic dolomite). Mostly, though, there are whole tracts of this that I just do not get. Literally, do not understand. Here is their rationale for deciding that what they've found is definitely biogenic,

Prior to a detailed discussion of the inferred fossil, we pose and answer two fundamental methodological questions related to our underlying assumptions:

1. Is there any evidence that the ensemble of objects (i.e. the inferred microfossils) is derived from one or more genetically related populations?
2. Is there a priori quantitative evidence against biogenicity of the objects?

The measured size distribution of the objects recovered at two of the richest sampling sites (both in Etosha National Park, Namibia) provides an answer to the first question. The null hypothesis is that the objects are not genetically related, and so no internally consistent size distribution is expected at either site. In Figure 2a the diameter X (defined as the mid point of the observed range of sizes) is plotted against the percentage of the observed population with diameter less than X. A linear relationship in this log-probability plot is usually taken as prima facie evidence of a log-normal distribution of sample sizes.26 Data from each site are, to first order, impressively linear and so the null hypothesis is rejected. This result deals satisfactorily with the issue of the ensembles of observed objects being part of a genetically related population at each locality. We remain uncertain as to why there are size differences, but it likely reflects an environmental control in that the larger specimens are recovered from a locality that represents relatively deeper, quieter conditions. Work is continuing on this issue.

We also stress that this conclusion provides no evidence of biogenicity: for example, Fallick et al.27 demonstrated convincing evidence for a truncated lognormal distribution of sizes for a suite of iron droplets in lunar soil 10084. Given that our positive size–distribution analysis cannot be taken as prima facie evidence of biogenicity, we then address the second of the above questions and ask: is a lognormal distribution of object sizes consistent with biogenicity? That the answer to this question is positive is proved by data derived from Javaux et al.28 and plotted in Figure 2b. Those workers described specimens that are believed to be 3.2-billion year-old organic-walled microfossils, and are thus accepted as biogenic. The scatter about the line in the log–probability plot is not distinctly different from the scatter associated with the objects we propose herein as biogenic fossils.

Hence, our fundamental questioning of core assumptions has been satisfactorily dealt with. What follows is a detailed description of the putative fossils themselves.

So, what they are basically saying is that because they are about the same size as some biogenic things, they must be biogenic. Am I being to strict with my definitions of what constitutes living things? I suspect not.

Are these things fossils, then? Possibly. I have no idea without seeing the specimens. But, to me, it looks like they've thrown some very expensive techniques at some very indistinct bits of crud.

Believe me, I don't enjoy tearing apart papers like this, and I certainly don't like to make a habit of it. I'm not even going to slam the authors; who cares if somebody writes something in a little journal somewhere? There are papers published like this all the time that just disappear without notice.

But seriously, could just somebody in the media check with one of us first?