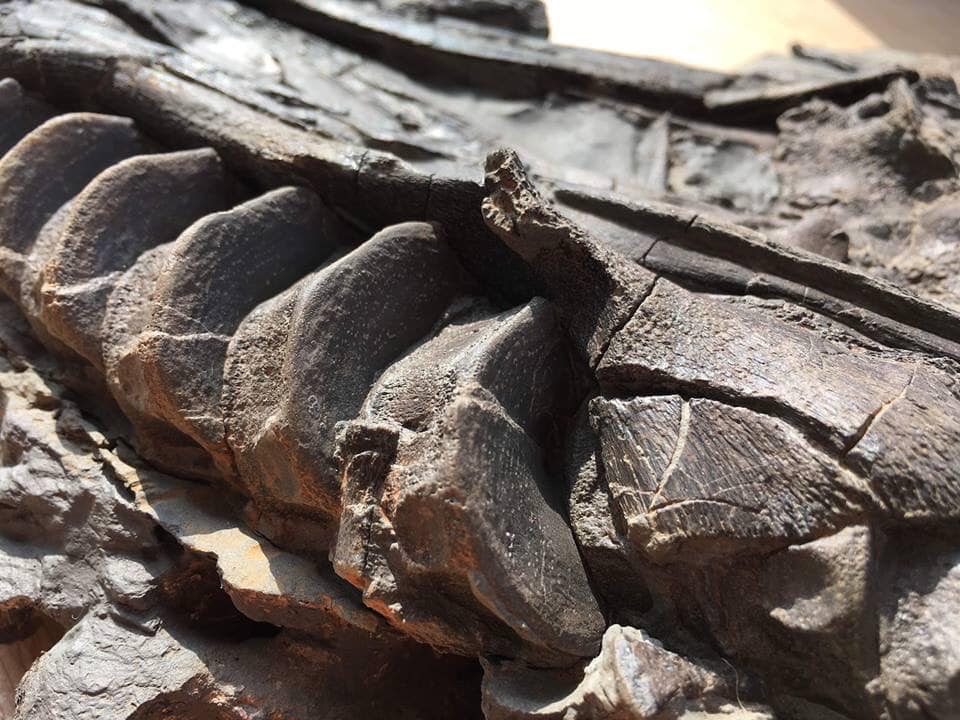 This well-preserved partial ichthyosaur was found in the Blue Lias shales by Lewis Winchester-Ellis. The vertebrae you see are from the tail section of this marine reptile. The find includes stomach contents which tell us a little about how this particular fellow liked to dine. As with most of his brethren, he enjoyed fish and cephalopods. Lewis found fish bone and squid tentacle hooklets in his belly. Oh yes, these ancient cephies had grasping hooklets on their tentacles. I'm picturing them wiggling all ominously. The hooklets were the only hard parts of the animal preserved in this case as the softer parts of this ancient calamari were fully or partially digested before this ichthyosaur met his end.

Ichthyosaurus was an extinct marine reptile first described from fossil fragments found in 1699 in Wales. Shortly thereafter, fossil vertebrae were published in 1708 from the Lower Jurassic and the first member of the order Ichthyosauria to be discovered.

To give that a bit of historical significance, this was the age of James Stuart, Jacobite hopeful to the British throne. While scientific journals of the day were publishing the first vertebrae ichthyosaur finds, he was avoiding the French fleet in the Firth of Forth off Scotland. This wasn’t Bonnie Prince Charlie, this was his Dad. Yes, that far back.

The first complete skeleton was discovered in the early 19th century by Mary Anning and her brother Joseph along the Dorset Jurassic Coast. Joseph had mistakenly, but quite reasonably, taken the find for an ancient crocodile. Mary excavated the specimen a year later and it was this and others that she found that would supply the research base others would soon publish on.

Mary's find was described by British surgeon, Sir Everard Home, an elected Fellow of the Royal Society, in 1814. The specimen is now on display at the Natural History Museum in London bearing the name Temnodontosaurus platyodon, or “cutting-tooth lizard.”

In 1821, William Conybeare and Henry De La Beche, a friend of Mary's, published a paper describing three new species of unknown marine reptiles based on the Anning's finds.

The Rev. William Buckland would go on to describe two small ichthyosaurs from the Lias of Lyme Regis, Ichthyosaurus communis and Ichthyosaurus intermedius, in 1837. Remarkable, you'll recall that he was a theologian, geologist, palaeontologist AND Dean of Westminster. It was Buckland who published the first full account of a dinosaur in 1824, coining the name, "Megalosaurus."

The Age of Dinosaurs and Era of the Mighty Marine Reptile had begun.

Ichthyosaurs have been collected in the Blue Lias near Lyme Regis and the Black Ven Marls. More recently, specimens have been collected from the higher succession near Seatown. Paddy Howe, Lyme Regis Museum geologist, found a rather nice Ichthyosaurus breviceps skull a few years back. A landslip in 2008 unveiled some ribs poking out of the Church cliffs and a bit of digging revealed the ninth fossil skull ever found of a breviceps, with teeth and paddles to boot.

Specimens have since been found in Europe in Belgium, England, Germany, Switzerland and in Indonesia. Many tremendously well-preserved specimens come from the limestone quarries in Holzmaden, southern Germany. Ichthyosaurs ranged from quite small, just a foot or two, to well over twenty-six metres in length and resembled both modern fish and dolphins.

Dean Lomax and Sven Sachs, both active (and delightful) vertebrate paleontologists, have described a colossal beast, Shonisaurus sikanniensis from the Upper Triassic (Norian) Pardonet Formation of northeastern British Columbia, Canada, measuring 3-3.5 meters in length. The specimen is now on display in the Royal Tyrrell Museum of Palaeontology in Alberta, Canada. Ichthyosaurs have been found at other sites in British Columbia, on Vancouver Island and the Queen Charlotte Islands, also known as Haida Gwaii.

The first specimens of Shonisaurus were found in the 1990s by Peter Langham at Doniford Bay on the Somerset coast of England.

Dr. Betsy Nicholls, Rolex Laureate Vertebrate Palaeontologist from the Royal Tyrrell Museum, excavated the type specimen of Shonisaurus sikanniensis over three field sessions in one of the most ambitious fossil excavations ever ventured. Her efforts from 1999 through 2001, both in the field and lobbying back at home, paid off. Betsy published on this new species in 2004, the culmination of her life’s work and her last paper as we lost her to cancer in autumn of that year.

Charmingly, Betsy had a mail correspondence with Roy Chapman Andrews, former director of the American Museum of Natural History, going back to the late 1950's as she explored her potential career in palaeontology. Do you recall the American Museum of Natural History’s historical paleo photos of expeditions to the Gobi Desert in southern Mongolia in China in the early 20th century? You’d remember if you’d seen them. Roy Chapman Andrews was the lead on that trip. His photos are what fueled the flames of my own interest in paleontology.

We've found at least 37 specimens of Shonisaurus in Triassic outcrops of the Luning Formation in the Shoshone Mountains of Nevada, USA. The finds go back to the 1920's. The specimens that may it to publication were collected by M. Wheat and C. L. Camp in the 1950’s.  The aptly named Shonisaurus popularis became the Nevada State Fossil in 1984. Our Shoni got around. Isolated remains have been found in a section of sandstone in Belluno, in the Eastern Dolomites, Veneto region of northeastern Italy. The specimens were published by Vecchia et al. in 2002. For a time, Shonisaurus was the largest ichthyosaurus known.

Move over, Shoni, as a new marine reptile find competes with the Green Anaconda (Eunectes murinus) and the Blue Whale (Balaenoptera musculus) for size at a whopping twenty-six (26) metres.

The find is the prize of fossil collector turned co-author, Paul de la Salle, who (you guessed it) found it in the lower part of the intertidal area that outcrops strata from the latest Triassic Westbury Mudstone Formation of Lilstock on the Somerset coast. He contacted Dean Lomax and Judy Massare who became co-authors on the paper.

The find and conclusions from their paper put "dinosaur" bones from the historic Westbury Mudstone Formation of Aust Cliff, Gloucestershire, UK site into full reinterpretation.

And remember that ichthyosaur the good Reverend Buckland described back in 1837, the Ichthyosaurus communis? Dean Lomax was the first to describe a wee baby. A wee baby ichthyosaur! Awe. I know, right? He and paleontologist Nigel Larkin published this adorable first in the journal of Historical Biology in 2017.

They had teamed up previously on another first back in 2014 when they completed the reconstruction of an entire large marine reptile skull and mandible in 3-D, then graciously making it available to fellow researchers and the public. The skull and braincase in question were from an Early Jurassic, and relatively rare, Protoichthyosaurus prostaxalis. The specimen had been unearthed in Warwickshire back in the 1950's. Unlike most ichthyosaur finds of this age it was not compressed and allowed the team to look at a 3-D specimen through the lens of computerised tomography (CT) scanning.

Another superb 3-D ichthyosaur skull was found near Lyme Regis by fossil hunter-turned-entrepreneur-local David Sole and prepped by the late David Costain. I'm rather hoping it went into a museum collection as it would be wonderful to see the specimen studied, imaged, scanned and 3-D printed for all to share. Here's hoping.

Lomax and Sven Sachs also published on an embryo from one of the largest ichthyosaurs known, a new species named Ichthyosaurus somersetensis. Their paper in the ACTA Palaeontologica Polonica from 2017, describes the third embryo known for Ichthyosaurus and the first to be positively identified to species level. The specimen was the collected from the Lower Jurassic strata (lower Hettangian, Blue Lias Formation) of Doniford Bay, Somerset, UK and is housed in the collection of the Niedersächsisches Landesmuseum (Lower Saxony State Museum) in Hannover, Germany.

We've learned a lot about them in the time we've been studying them. We now have thousands of specimens, some whole, some as bits and pieces. Many specimens that have been collected are only just now being studied and the tools we are using to study them are getting better and better.

While they resembled fish and dolphins, Ichthyosaurs were large marine reptiles belonging to the order known as Ichthyosauria or Ichthyopterygia. In 2018, Benjamin Kear and his team were able to study ichthyosaur remains at the molecular level, Their findings suggest ichthyosaurs had skin and blubber quite similar to our modern dolphins.

While ichthyosaurs evolved from land-dwelling, lung-breathing reptiles, they returned to our ancient seas and evolved into the fish-shaped creatures we find in the fossil record today.

Their limbs fully transformed into flippers, sometimes containing a very large number of digits and phalanges. Their flippers tell us they were entirely aquatic as they were not well-designed for use on land. And it was their flippers that first gave us the clue that they gave birth to live young; a find later confirmed by fossil embryo and wee baby ichy finds.

During the early Triassic period, ichthyosaurs evolved from a group of unidentified land reptiles that returned to the sea. They were particularly abundant in the later Triassic and early Jurassic periods before being replaced as premier aquatic predator by another marine reptilian group, the Plesiosauria, in the later Jurassic and Cretaceous periods.

In the Late Cretaceous, ichthyosaurs were hard hit by the Cenomanian-Turonian anoxic event. As the deepest benthos layers of the seas became anoxic, poisoned by hydrogen sulphide, deep water marine life died off. This caused a cascade that wreaked havoc all the way up the food chain. At the end of that chain were our mighty predaceous marine reptiles.

Bounty turned to scarcity and a race for survival began. The ichthyosaurs lost that race as the last lineage became extinct. It may have been their conservative evolution as a genus when faced with a need for adaptation to the world in which they found themselves and/or being outcompeted by early mosasaurs.

The find and photos are all credited to Lewis Winchester-Ellis. Thank you for sharing your tremendous specimen with us. Lewis did much of the preparation of the specimen, removing the majority of the matrix. The spectacular final prep is credited to Lizzie Hingley, Stonebarrow Fossils, Oxfordshire. Her skill with an air scribe is unparalleled.