Home > Space > Between Death and Data

Oliver Knevitt
Little green men. Can they exist? Do they exist? And what do they look like?

Published this week in Philosophical Transactions A is an extravaganza of papers about extraterrestrial life, and what we should do when we meet them. As for the first two questions, the answers are, to paraphrase from the papers: yes, they could exist, and; we just don’t know yet whether they do. But the third question, tackled by Simon Conway Morris in the journal, is most intriguing, and one that has been thought about ever since we knew that the Earth wasn’t the only planet. We are finally at the stage of knowing enough about the constraints on evolution on Earth that we can finally begin to put some bounds on what ET might really look like. Conway Morris makes a case for ET looking very much like us, but how justified is this? Somewhat differing from Simon's entirely plausible viewpoint, I'm going to offer my own view on what we can expect ET to look like.

ET’s Biochemistry
Let’s start at the bottom. What can we expect the biochemistry to be based on? Rather than Earth’s boring carbaquists (carbon based life forms), could life be silicon based, like Horta below? Nitrogen based? Boron based?

Well, maybe, but our hunch is: probably not. Carbon so un-choosy over what it will bond with, and it is common enough to be very useful; even some organic carbon compounds such as amino acids can be found just lying around on asteroids. Moreover, because of their ability to self-assemble, the structures of things like proteins are so good that they may well turn out to be universal as well, as could of the bases of metabolic cycles. Simple protein motifs like alpha-helices could be widespread, as could lipid membranes, and, who knows, maybe even some form of DNA might be common.

Could life be an acellular, green slime? Unfortunately, it’s impossible to have any sort of complex biochemistry without enclosing a small space in which you can regulate your chemical environment. So, yes, cells are the order of the day. By extension, then, we might expect to see very similar molecular machines employed for maintaining such an environment, being as the size and chemical properties of ions are the same everywhere. Already then, we have an alien life form that would not look out of place if found on Earth.

Asides from how it is built, though, the metabolism

of our ET is more difficult to predict. This is because life is actually pretty easy if you know how. On Earth, all you need for life is a source of carbon and a source of energy, and presumably, if you already have your foot-in-the-door with life having evolved, there’s no reason to think that these conditions won’t be exactly the same on another planet. The source of energy can be light, but for our presumably heterotrophic intelligent ET, it’s very easy without it. All you need to do is couple an oxidation reaction to a reduction reaction. The oxidant, (e.g. O2, Mn4+, SO42-), strips away the energy-containing-electron and the reductant (e.g. organic matter, NH4, sulphide) mops up the electrons once they’ve had their energy prized away from them. As long as you can yield about 20kJ per mole from this, this is enough to power your metabolism.

As it happens, oxygen as an oxidant provides the most energy, especially when coupled with reduction of organic matter (giving 126kJ per mole), so an oxygenic atmosphere gives a complex, fast metabolising organism the best chance in life. But if these are not available, you can still make a fairly decent living on other substrates or atmospheres. Although we have only ever found a handful of multicullular animals that can only live without oxygen on Earth, on other planets, cells might have specialised organelles instead of mitochondria that can metabolise different substrates; Earth-bound anaerobes have recruited hydrogenosomes for this purpose. Such life would be metabolically slow compared to aerobic animals but... well, its still life, after all.

Life, then, will almost certainly be cellular and carbaquist, and so will already feel, to some degree, strangely familiar. Somewhat disappointingly, though, the majority of ETs that we bump into first will be single celled organisms. There are likely to be thousands of planets whose height of achievement never progressed further than microbial biofilms. Indeed, the Earth didn’t for the most part of its history, and multicellularity may have been a desperate response to the rise of oxygen anyway. Who knows – perhaps we were visited by numerous flotillas of disappointed green men during our 2.5 billion years of single-cellularity. We will have to quietly ignore this and move on.

At a microscopic scale, then, we can expect ET to be a lot like us. But as for the large scale anatomy, we cannot be so sure. ET will be shaped by its evolutionary baggage of characters that it has needed to get through its millions of years of evolution (remember the Panda’s Thumb; new characters can only be made by modifying old ones). Who can possibly guess what history our ET may have seen? It may be predatory and marine, in which case it could have a streamlined body like a dolphin; or it could be tree dwelling (I'm sure that if there are land based photosynthesisers, there will have been a natural progression towards a tree like form), like an orang-utan. Perhaps it could have occupied entirely different ecological niches not seen on Earth, and therefore we can have no way of predicting what body forms were favourable on its planet.

However, there are various characters that we can be at least moderately sure of. Bilateral symmetry is a simple and adaptable method of building bodies (other radially- and three- fold-symmetrical organisms never got far on Earth) and so it is very likely that bilateral symmetry will dominate the biota of an alien planet also. ET could have a modular body plan, like the arthropods, or it could be based around one stick like module with four appendages, like us, but, nonetheless, some sort of free appendage will be present to manipulate tools. Such an innovation offers the first impetus for intelligence by stimulating a deep interaction with your environment. ET will have to be large enough to reduce the strain on its metabolism and, presumably, big enough to provide for its over-achieving brain. It will be warm blooded, to provide a stable environment for the biochemistry of the brain (I'm assuming that there is one; although where it is is another matter

On the sensory side of things, ET will undoubtedly have binocular, camera eyes: compound eyes would have to be unfeasibly large to have a similar acuity as camera eyes. Whether it has developed other senses such as echolocation or electrical field sensing to back this up again,  depends on its environment. Whilst it will need a large brain to deal with this sensory information, a capacity for intelligence is required too – the two do not necessarily go hand in hand. If intelligence becomes a selective advantage, the organism then has the ability to come up trumps when required to.

For us, sociality was the key in pushing our intelligence to where it is now, and this will certainly be true of ET. ET will be shaped by intimate interaction with its fellow ETs, and its constant need to continually assess social situations and the need to increase its own standing will have pushed it forward more than any other factor in its recent evolution.

Lastly, ETs history will also have been chequered by conflict and by remorseless savagery. Like it or not, game theory demands that an entirely peaceful and altruistic race is doomed to failure,  destined to be exploited such a race that does. Because of so-called “civilised” life’s presumably  ephemeral nature, Seth Shostak believes that any life that we find is more likely to be a vastly superior artificial life; vastly more intelligent and far less likely to want to blow itself up. Perhaps there’s an inevitable grain of truth in that. 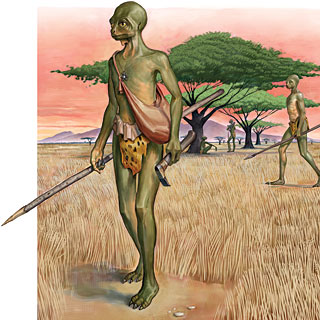 Many have suggested that if not wiped out in the KT extinction, non-avian theropod dinosaurs might  have evolved into humanoids. Image: Matt Collins, after an illustration by Dale A. Russell in Reconstructions of the Small Cretaceous Theropod Stenonychosaurus Inequalis And A Hypothetical Dinosauroid, by D. A. Russell and R. Séguin, National Museums of Canada, National Museum of Natural Sciences, 1982

Could we stumble across an alien world and come face to face with ourselves? Simon Conway Morris has some forthright views on this subject, exemplified in the paper published this week. Simon is famous – infamous, perhaps – for his idiosyncratic views on the evolution of morphology; viewing a humanoid form as an almost inevitable consequence of evolution by natural selection, and hence he would expect any intelligent alien to effectively be a primate biped. This is a view that has both attracted much criticism, but also praise from many, including Richard Dawkins. Like him or loathe him, (I was lucky enough to be  supervised by him as an undergraduate, so I am predisposed towards the former); Simon injects some very solid sense into the equation. It is certainly very true that, just as there are in physics and chemistry, there are laws and bounds on the scope of evolution of form, and thus any group of organisms may undergo a similar sequence of bumps and lifts along their rollercoaster of  evolution, but still use the same solutions to end up with a similar morphology at the end. The humanoid form certainly is one predisposed towards intelligence, with our large brains and versatile hand grasp, and thus it is not inconceivable that we could stumble across a few humanoids in our search across the  galaxy.

However, it is worth remembering that of the 60 to 80 phyla of animals, only in the chordates did intelligence arise. And, within the chordates, only mammals evolved brains big enough for higher  intelligence. And of the 24 orders of mammals only one — ours, the primates — has technological intelligence. And within the primates, only did Homo sapiens develop intelligence. This represents millions upon millions of phyletic lineages that simply failed to achieve civilisation-building intelligence. Even the Neanderthals got tantalizingly close, but, despite hundreds of  thousands of years of opportunity, they never quite made the grade. We still can’t be sure why dinosaurs never developed intelligence like ours, and it seems to me that there is no evolutionary slippery slope to intelligence like ours - hence, despite his pursuasive argument, I don't agree with Simon's hypothesis.

Perhaps humans could be rarer than we thought.

Michael Shermer's video and blog post raise interesting points, and demonstrate Dawkins' opinion on this. The paper published this week is a fantastic read, as is all of Conway Morris' stuff. Seth Shostak also has some great insights on the humanoid problem as well as on the likelyhood of meeting galactic AI.