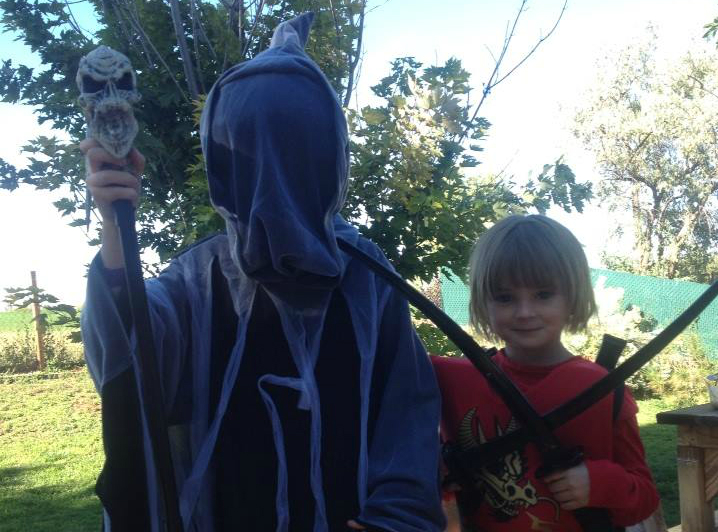 I was at the park the other day throwing pinecones at my kids when a horrified mother asked, “How can you hit your kids with pinecones!” I said it was pretty easy: you just don’t lead them as much. First, this is important because my brain is almost completely incapable of accessing the proper pop-culture comeback (in this case, Full Metal Jacket) until the middle of the night after it was needed. Second, it’s not entirely true: my 5-year-old still tends to take a vector, but my 7-year-old has learned to zig and zag in a way that makes him really hard to hit. (Note: for proper aerodynamics it’s essential to use pinecones in which the seed scales remain closed. You’ll thank me later.)

Of course, I imagine there may be studies in the fields of education or child development that recommend against pelting your offspring with small, swiftly-thrown projectiles. But gosh is it fun! And I just ran across this One Study to Rule Them All, which implies that as long as you love your kids and they love you, it takes a real, concerted effort to mess them up too badly.

The study, by the Sutton Trust, is about attachment. Now attachment is a hot topic, fraught with intrigue and argument in circles that care to intrigue and argue about this kind of thing. But basically, secure attachment describes a situation in which, “a child can safely express negative emotion, and seek proximity to the caregiver, and can expect to feel better,” the authors write.

On the flip side are two major styles of insecure attachment: avoidant in which distressed kids learn to avoid the parent, and disorganized in which the child tries desperately to break through a parent’s wall of indifference or anger with “big” and sometimes irrational emotions.

A host of studies show the benefits of secure attachment, ranging from higher cognitive and social skills, to higher incomes and lower rates of divorce and mental illness. Apparently, the benefits of secure attachment remain even across tiger parents and helicopter parents and free-play parents and parents who over-praise or under-wash or happen to have a particular fondness for watching children run in glorious mock horror as they try to make it to safe zone before being pummeled by coniferous reproductive structures.

Here’s the kicker: the study finds that a full 40 percent of children are insecurely attached. Twenty-five percent of kids avoid their parents when the kids are upset. And 15 percent “learn to resist the parent, because the parent often amplifies their distress or responds unpredictably,” they write.

Sadly, attachment tends to be a generational, trickle-down thing – the largest risk factor for having a child with insecure attachment is a parent’s own attachment. Were you or are you still in this 40 percent? If so, it’s going to take some conscious creation of a new way of relating in order to break the cycle.

Now, I don’t know nearly enough to draw the line between what is responsiveness and what is over-indulgence. But what I do know is this: after we get back from the park, my kids are going to want to snuggle in bed and look at pictures of macaroni penguins on the iPad.

I figure: love the hell out of your kids and let the rest sort itself out.