The Norwegian government has revealed the architectural design for the Svalbard International Seed Vault, to be carved deep into frozen rock on an island not far from the North Pole. The entrance to the "fail-safe" seed vault will "gleam like a gem in the midnight sun," signaling a priceless treasure within: seed samples of nearly every food crop of every country. The vault is designed to protect the agricultural heritage of humankind -- the seeds essential to agriculture of every nation. 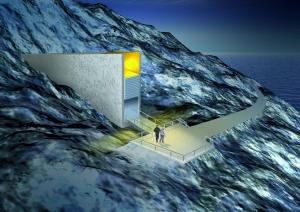 "This design takes us one step closer to guaranteeing the safety of the world's most important natural resource," said Dr. Cary Fowler, Executive Director of the Global Crop Diversity Trust, which will co-fund the vault's operations and pay for the preparation and transport of seeds from all developing nations to the Arctic island of Svalbard. "Every day that passes we lose crop biodiversity. We must conserve the seeds that will allow agriculture to adapt to challenges such as climate change and crop disease. This design is as awesome physically as it is attractive aesthetically, and both are fitting tributes to the importance of the biological treasure to be stored there."

Construction is slated to begin in March 2007 and to be completed in September 2007. The vault will officially open in late winter 2008.

"By investing in a global permafrost safety facility for seeds, the Norwegian Government hopes to contribute to combating the loss of biological diversity, to reduce our vulnerability to climatic changes, and to enhance our ability to secure future food production," said Mr. Terje Riis-Johansen, Minister of Agriculture and Food, Norway.

The site was chosen, in part, because the ground is perpetually frozen, providing natural back-up refrigeration that would preserve the seeds should electricity fail. Yet, even here, project architects had to consider how to offset the potential impacts of climate change.

The design will accommodate even worst-case scenarios of global warming in two main ways. For one, the vault will be located high above any possible rise in sea level caused by global warming: the vault will be located some 130 metres above current sea level, ensuring that it will not be flooded. This puts it well above a seven metre rise that would accompany the melting of Greenland's ice sheet, or even a 61 metre rise that could accompany an unlikely total meltdown of Antarctica.

Secondly, scientists determined the impact of rising air temperatures on the permafrost, which is normally between -4°C and -6°C (24.8°F and 21.2°F). They found that the permafrost would warm much more slowly than the air. In addition, the deeper into the mountain, the colder it will remain. Therefore, the vault will be located an extraordinary 120 metres into the rock, ensuring that rising external air temperatures will have no influence on the surrounding permafrost.

"Even climate change over the next 200 years will not significantly affect the permafrost temperature," says project manager Magnus Bredeli Tveiten, with Statsbygg, the Norwegian government's Directorate of Public Construction and Property.

To accomplish this, the 120-metre entry tunnel will penetrate through the permafrost, opening to two large chambers capable of holding three million seed samples. The tunnel and vaults will be excavated by means of well-known boring and blasting techniques, with the rock walls sprayed with concrete.

In contrast to this utilitarian interior, "the exterior structure shoots out of the mountainside," Tveiten said. The entrance portal will be a narrow triangular structure of cement and metal, illuminated with artwork which changes according to the special lighting conditions of the Arctic. In the summer months, the entrance "will gleam like a gem in the midnight sun," Tveiten says. Throughout the dark winter, when the sun never rises, it will glow with gently changing lights.

The design also reflects of the project's approach to security.

"We decided early on that there is no point in trying to hide this facility from the public," Tveiten said. "Instead we will rely on its presence being well-known in the local community, so if the public sees something suspicious, they will react to it."

Other security measures include several sets of reinforced doors between the entrance and the chambers, the absence of windows, and a video monitoring system.

Riis-Johansen emphasized the vault's importance to the world community. "From a global perspective the emphasis is on assisting developing countries by offering a safe haven for their valuable biological material. I also hope that the interest that is shown in the Svalbard Arctic Seed Vault will create increased awareness for the need for conservation and sustainable use of our genetic resources."

The Arctic seed vault is part of a comprehensive global strategy being implemented by the Global Crop Diversity Trust to protect collections of crop genetic diversity around the world.

The mission of the Trust is to ensure the conservation and availability of crop diversity for food security worldwide. Although crop diversity is fundamental to fighting hunger and to the very future of agriculture, funding is unreliable and diversity is being lost. The Trust is the only organization working worldwide to solve this problem. The Trust is finalizing an agreement with the Royal Ministry of Agriculture and Food of Norway and the Nordic Gene Bank to provide for the long-term funding, management and operation of the vault.

Note: This story has been adapted from a news release issued by Global Crop Diversity Trust.