Everything I Need To Know About Science I Learned From Watching "The Lost Skeleton Of Cadavra"
By Cash Simpson | October 26th 2008 10:06 AM | Print | E-mail

Cash Simpson
It's not often you can boil down complicated abstract ideas about science or culture into simple concepts everyone can understand.  Gems like "for every reaction there is an equal and opposite reaction" don't come along every day.   But every time someone asks me what science is like I simply say "You've seen The Lost Skeleton of Cadavra.  It's like that" and they nod knowingly.

What?  You haven't seen it?   Read on my friends.   In a few key phrases you will know everything you need to know about how things get done.  Science wisdom, as distilled by quotes from one of the greatest science films of all time (and it's fun for Halloween too) - The Lost Skeleton of Cadavra.

It's PG and totally safe for older children, unless your kid is prone to irrational fear of Skeletorama-motion plastic props and utters sentences like ... "Even when I was a child, I was hated by skeletons!"


That's right, skeletons may hate you but work still needs to get done.   You may like research but research doesn't have to like you.   Now, research won't dislike you in the skeleton-wants-to-kill-you-and-take-your-magic-rock way, more in a disinterested casual disdain way.   Science is inherently dull.   You don't often get big breakthroughs like Elizabeth Shue had in The Saint, inventing cold fusion and what not.


"Well, if I wanted to have a safe life, I guess I wouldn’t have married a man who studies rocks."


That's right, science is not always sitting in a cozy lab with women who look like Jennifer Connelly in Hulk.

Sure, it's like that a lot but most of the time it can be a little dangerous.   Say, for instance, you work at the LHC.  What if you fire it up and that lawyer who calls himself Doctor (yes, I know, J.D.' s can call themselves Doctor, just like I can call myself a Chinese jet pilot) and his science fiction writer compadre(1) are right and Mayans appear from a black hole with a whole army of strangelets doing suppressing fire?   Not so safe now, are you? No, science is not safe all the time.   Not just geologists are at risk either.   Bruce Banner played with gamma rays and turned into a raging animal -  not an animal in the "throw me around some furniture but then make me a nice cup of tea later" way women like - an actual green animal.   And animal rights activists turn into ... well, insane lunatics who firebomb the homes of scientists.  That has nothing to do with gamma rays.

Back to the LHC and it's mysterious rays.   The worst thing that will happen is bad luck.  Bad transformers, Helium leaks, Klondike Kop-level mistakes - it's what you expect from something made by French government workers.    But they'll get it fixed.

And fear not.  If things go wrong, scientists will protect you.   If you're wise, you'll get behind Maria Spiropulu. She'll know what to do.


"I’m a scientist, I don’t believe in anything."


Scientists only believe in their own fields and maybe one similar.   Everything else is quackery.    Physicists can easily make fun of psychologists or Voodoo shamen, for example, but have no problem believing in dark matter with no more proof then 'if you don't believe in dark matter, the universe can't be expanding, and it certainly is'.  So 'dark matter' is 'all the stuff we don't  understand yet.'

Biologists are the same way.   Non-PhDs will scratch their heads and wonder why there isn't a transitional fossil between fish and humans, for example, and less patient biologists will wave their hands and insist it is foolish to expect there to be evidence for every little thing. Scientists believe in falsification in ways ordinary people cannot comprehend.   This is why women and chess players make great scientists.  But falsification usually applies to other fields ... or competitors.


"Betty, you know what this meteor could mean to science. It could mean actual advances in the field of science."


Science rarely moves in leaps.   Newton made a leap.   Darwin made a leap.  By the late 1800s there was a belief we had learned everything there was to learn.  All that remained was learning more detail about what we already knew.

Today, there is resistance to that idea, but only because every scientist has read that scientists said that in the late 1800s.  Secretly we believe it now too.   Like protesters in San Francisco who protest today because people did it generations ago, we accept it as a given that there is a great leap coming.   Science may make actual advances, but unless we start finding magic rocks, I doubt it.

Personally, I think we know it all.


"Too much science?  Is that possible?"


Well, it isn't possible, except maybe in America.   And that isn't a funding problem, it's a visa problem.   In the 1990s we decided that the best way to protect wages domestically was to keep lower-priced people from other countries out of the market.   So since they can't get jobs, they go back home.   But they can still get student visas.  So basically we are training competitors here and then telling them they can't stay.

There are a lot of science policy issues that need to be addressed in the next few years so you're probably wanting to know which presidential candidate is going to be better.  The answer?  Neither, and it isn't because of war or mortgages or anything else.    It's because there isn't  a crucial issue that relies on a science solution.   Global warming is a bulldozer coming at us but it's a hundred years away.   NASA long ago gave up any interest in anything beyond perpetuating NASA budgets so they aren't doing anything worth talking about.    The NIH has so much money it doesn't know what to do with it, unless you think one university in America deserves over a billion dollars a year in federal money.


Are we killing science in America?

So vote whatever way you want.    From a science point of view, other than a placebo like backing hESC research and lip service to global warming, it won't make a bit of difference.


"My wife sometimes forgets she is not a space alien."


Not in a mood to watch campy Halloween movies about plastic skeletons?   No interest in Dracula, Frankenstein or dumb kids having sex with serial killers nearby?   Here is my short list of Halloween stuff that demands to be watched. One of them (#2) also has plastic skeletons but it has shotguns and a Book of the Dead, so I call that a draw.

Yes, Hollywood people seem to think all vampires are hot girl vampires. But Mathilda May is a French girl playing a naked space vampire and that merits your consideration. Will you think it's great cinema? No, it's a Republic serial and you'll only watch one episode but it started the sci-fi alien craze that swept throughout the 1950s and it should be a Halloween staple.

Some day you will remember these words; The Matrix

ripped this movie off. John Carpenter made a brilliant film here that's a lot deeper than you might think. Perfect for Halloween or any time, especially if you are concerned about a consumer culture, though I think we all gave up on that long ago.

Why? Because Evil Dead

is just too darn scary but Army of Darkness has the right blend of humor, action and whatever else you call it. It also has skeletons, a Book of the Dead, and classic lines like "Gimme some sugar, baby!"

Seriously, you know why. 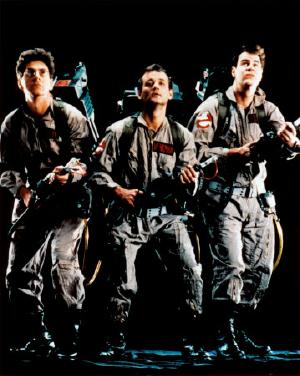