High intelligence is the best protection against early sexual activity during adolescence, research has shown. Can it be that intelligent kids don't need free condoms to be convinced they shouldn't have sex? Well, yes, that may be, but it may also be that smart kids just can't get dates.

To reach this conclusion about intelligence and sexual activity in teens, researchers in this year 2000 study at University of North Carolina at Chapel Hill and McGill University took two separate sample groups in the 7th to 12th grades. Both studies used the Peabody Picture Vocabulary Test (PPVT) as an intelligence measure and confidential admissions of sexual activity. 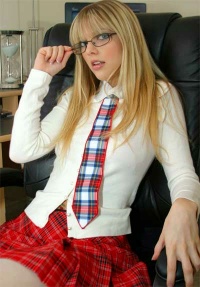 Virgin by choice? Or she just can't get a date?

Their results showed a distinct bell curve. Teens at the upper and lower ends of the intelligence distribution were found less likely to have had sex. And even once they started being sexually active, the more intelligent ones postponed the full range of partnered sexual activities until later than the rest.

So it's really only the average intelligence kids we have to worry about. That means the guys on the football team couldn't get laid either? I bet you feel a lot better knowing that.

What the study leaves out is whether or not the kids in this study could have had sex. It's easy to correlate intelligence with not getting sex if you don't ask about willingness.

One reason we might guess that smarter people in high school, or in more challenging colleges or majors, delay their sexual debuts is because they are delaying gratification in expectation of future reward. Sexual behavior (or at least the investment needed to procure a partner or sustain one) may compete with time/resources required for other goals, and intelligent people may have more demanding goals.

Which is a nice way of saying intelligent teenagers don't have sex, but they could.

Mr. Malloy also notes this survey from Wellesley that says 72% of biology majors were virgins.

Do you believe 72% of biology majors could have sex but still don't? Granted, I think biology students are enlightened ( though not as enlightened as math students, with 83% virginity ) but they can't be that enlightened.

University of Georgia Assistant Professor Joe Sabia addresses this in the upcoming issue of Economic Journal:

... estimates show that sexually active adolescents have grade point averages that are approximately 0.2 points lower than virgins. However, when information on the timing of intercourse decisions is exploited and individual fixed effects are included, the negative effect of sexual intercourse disappears for females, but persists for males.

In other words, the large majority of biology majors are males and an even larger percentage of them make up the gene pool * of virgins in these results.

That means girls, even among biology majors, can get sex whenever they want - and they're all intelligent enough to know it.