Portuguese scientists have just published a revolutionary new approach to treat rheumatoid arthritis (RA) which, if translated to humans, can change the way we treat autoimmunity (and so diseases like RA but also diabetes and MS) and, with it, the lives of millions of patients

The new treatment by Joana Duarte, Luis Graca and colleagues from the Instituto de Medicina Molecular (IMM) in Lisbon is remarkable because it specifically stops the abnormal immunological response behind RA without touching the rest of the immune system, and a short treatment has long lasting effects suggesting that it might even cure the disease. In contrast, all therapies available for RA (or any other autoimmune disease) work by shutting down large parts of the immune system - compromising the patients’ capacity to fight other diseases - and have to be administered for life, meaning that they control the symptoms but not the underlying causes of the disease contrary to the therapy now published. The research has just been published in the journal PLoS (1)

In autoimmunity the immune system misrecognises parts of the own body, leading to their attack and – if not controlled – their damage or even destruction. RA is an autoimmune disease where the targets are the joints and surrounding tissues. It is also a devastating illness; it affects more than 1% of the world population with, according to the World Health Organization, more than 50% of the patients no longer able to sustain a full time job after just 10 years of disease, with overwhelming financial, social and even mental consequences. 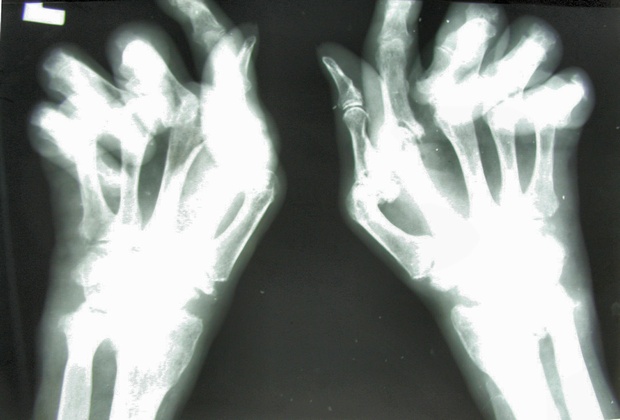 There are no cures for RA (or for any other autoimmune disease) and even the latest available treatments are very non-specific, because the autoimmune process is still poorly understood. As consequence they act suppressing or deleting big chunks of the immune system, what can be effective to stop the abnormal attack but also has damaging negative side effects which contribute to a poorer quality and the reduced life expectancy seen in these patients.

In the work now published Duarte, Graca and colleagues try to address the problem using an antibody being tested in transplantation studies where it seems to specifically shut down the immune response behind organ rejection. This because the antibody in question acts exactly on the subsets of white blood cells - the CD4 T cells – which are at the core of the immune response in RA. The researchers also use a recently discovered breed of mice (called SGK) that suffers from chronic RA - like humans, and contrary to all other animal models where the disease disappears by itself – allowing them to test the treatment long-term effects (inclusive if it can cure RA).

And in fact, SGK mice treated with the anti-CD4 antibodies at the same time that RA is induced show no symptoms of disease. In contrast, control mice, injected with an irrelevant antibody, suffer full blown arthritis. Even more interesting, the protection is still active long after the antibody had disappeared from the animals’ system showing a lasting effect that suggests that the antibody is not just suppressing the auto-aggressive response (or the effect would disappear as the antibody was eliminated) but had, somehow, switched it off (maybe for good?). In animals already showing symptoms when the antibody is injected the treatment reduces disease severity and its rate of destruction, but it is not able to stop it.

But how does the antibody work? During the transplantation studies it was suggested that they did not delete the aggressive CD4 T cells (the most logic hypothesis) but, instead, activated a “protective” subgroup of CD4 T cells called Foxp3 cells (or regulatory T cells), which are known to suppress potentially dangerous immune responses, including those responsible for autoimmunity.

After confirming that CD4 T cells deletion was not behind the antibody protection, Duarte and colleagues then investigated if the antibody treatments led to changes in Foxp3. They also looked at another CD4 T cell subset - called TH17 – which is believed to be at the core of the abnormal immune response in RA.

And indeed, protected animals had much less TH17 and more Foxp3 cells than animals suffering from RA. Even more remarkable, these “protective changes” were only seen on the joints, the remaining immune response was no different - as demonstrated when these mice were injected with foreigner proteins and responded as well as non-treated animals.

To confirm the role of the antibody in the changes observed on the Th17/Foxp3 subsets, Duarte and Graca grew CD4 T cells in laboratory under conditions that normally lead to the growth of the TH17 population and again tested the antibody effect. And again when the RA anti-CD4 antibody was added to these cells there was a reduction in TH17 cells and an increase of Foxp3 (in comparison with the same cells growing without antibody).

Duarte and Graça’s work reveals how it is possible to prevent (and treat) RA by targeting the balance between aggressive and protective subsets of CD4 T cells in the joints with the help of antibodies. Most importantly, for the first time is shown that the disease can be controlled without any damage to the remaining immune response.

But the advantage of this new treatment is deeper as Luis Graca explains “available treatments act on the effects of the immune response stopping the immune-mediated damage and the aggression inflicted by the disease, but without treating the underlying cause. This has two problems. First, when stopped the disease becomes active again; second, as the treatment is not specific, immune protection against infection can be also compromised. Anti-CD4 treatment appears to be able - at least in these experimental systems in mice - to achieve immune tolerance: leading to long term benefit even when the drug is no longer present in the organism and maintaining the immune system competence to eliminate other immune challenges, like infection”.

In fact, if the protection can be shown to last for life this can be, in fact, a possible cure for RA and maybe other autoimmune diseases.

There are, however, several challenges ahead before this can be even considered as the mechanism behind the antibody effect is not clear (how exactly is the balance Foxp3/TH17 pushed towards the 1st subset?) and this, together with the fact that the treatment is not very effective treating full blown RA (in opposition to preventing it), shows that much remains to be understood.

Another question, and a crucial one, is if these results can be translated into humans. However, not only many of the current treatments to RA and many other autoimmune diseases are based on antibodies (although deleting proteins and cells not changing their behaviour), but we already know that humans also have Foxp3 cells involved in protection against autoimmunity. These are both good auguries for a success, soon or later, in humans.

But before anything else scientists need to understand the antibody molecular target and protective mechanism.  As Graca reveals “ at the moment we are interested in finding out the molecular mechanisms involved in the tolerance, and whether the same results can be achieved in other T cell-mediated diseases like allergy. We are also testing other animal models where autoimmunity is mediated by Th17 cells. This will give us abetter idea of what is going on and to where go next”.

Whatever happens next this is a remarkable article - the first time that the autoimmune response in RA can be specifically controlled and apparently by restoring the normal balance between the different cells involved in immunity in what can actually be the beginning of the path towards a cure for RA and other autoimmune diseases.