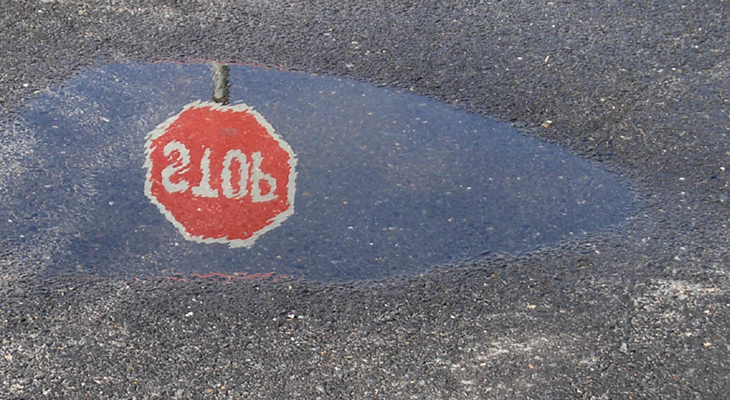 By Charles Choi, Inside Science -- If you poured a glass of water on a table, you would expect to get a puddle that spreads for a while and then stops. However, until now, the formulas that scientists used to describe the flow of fluids suggested the puddle should never stop spreading.

Now researchers have solved the mystery of why such a puddle would not keep spreading endlessly — the culprit is a force that acts on microscopic scales. This solution to such a simple everyday phenomenon could have far-reaching ramifications for everything from improving advanced electronics to fighting climate change.

Consider the way a spilled liquid spreads across a kitchen counter. It produces a thin, but visible, depth of liquid on the surface. In the classic model of spreading liquids, the size of the puddle depends on the competition between gravity and surface tension. Gravity pulls liquids down against surfaces, making puddles grow larger and thinner, and surface tension makes drops of liquid want to bead up into the most compact shapes possible and stop spreading.

Surface tension results from how tightly the molecules in liquids stick to one another as opposed to something else, making the surfaces of liquids act like flexible membranes that can be surprisingly strong — for instance, the surface tension of water is great enough to support the weight of an insect such as a water strider.

However, this model is incomplete. "Puddles should continue spreading forever if you do not take other forces into account," said study lead author Amir Pahlavan, a graduate student studying mechanical engineering at MIT.

Solving this puzzle could be key to any application involving a liquid spreading on a surface. For instance, as electronics get increasingly more compact, they generate more heat; one way to cool them down involves flowing liquid over them. "You'd want to understand the forces that'd lead to the formation of droplets or thin films of liquid on them," Pahlavan said.

This latest research began as part of an effort to look much deeper than the common puddle. The team began by trying, to better understand how fluids — both liquids and gases — flow over surfaces deep underground. For example, injecting a gas into declining oil reservoirs can reduce the oil's viscosity and make untapped oil easier to recover. Increasingly, carbon dioxide is also stored underground to help keep it from contributing to climate change.

Before they could study those sorts of questions, they needed a more accurate picture of how liquid spreads on surfaces, such as the way spilled milk travels across a tabletop.

The secret to understanding why puddles stop spreading lies in the way films of liquid behave when they get less than 100 nanometers thick at their edges — less than roughly a thousand times thinner than an average human hair.

Such tiny scales are the domain of the so-called van der Waals forces. To understand the forces, imagine two molecules that are close to one another, each surrounded by a cloud of electrons. Random fluctuations in the electron clouds will sometimes lead electric charge to concentrate on one side of a molecule more than the other. This in turn disturbs the electron cloud of that molecule's neighbor, forcing it to also develop slightly electrically negative and slightly positive poles analogous to those of a magnet.

These intermolecular forces are miniscule, but when a film of liquid becomes nearly as thin as molecules, the research team's new calculations show these forces can have a significant impact, enough to keep puddles from spreading forever. Whereas prior research only considered the intermolecular forces acting at the interface between a liquid and the air, the new research also accounted for interactions taking place simultaneously between the liquid, the air, and the solid that the liquid is spreading on. These findings should apply to many situations where liquids flow on solids, wrote Howard Stone, chair of mechanical and aerospace engineering at Princeton University, in an email to Inside Science. He did not take part in this research.

In the future, Juanes and his colleagues want to analyze the way fluids flow over rough surfaces, such as in fractured, porous underground rock formations. "A real surface is never completely flat and smooth — there's always some roughness to take into account, which causes many new features to arise and take into account," Pahlavan said.

Pahlavan, Juanes and their colleagues Luis Cueto-Felgueroso and Gareth McKinley detailed their findings online in a paper scheduled to be published in the journal Physical Review Letters.

Charles Q. Choi is a freelance science writer based in New York City who has written for The New York Times, Scientific American, Wired, Science, Nature, and many other news outlets. He tweets at @cqchoi. Reprinted with permission from Inside Science, an editorially independent news product of the American Institute of Physics, a nonprofit organization dedicated to advancing, promoting and serving the physical sciences. Image credit: Chris Preen, Creative Commons

Charles Q. Choi is a freelance science writer based in New York City who has written for The New York Times, Scientific American, Wired, Science...