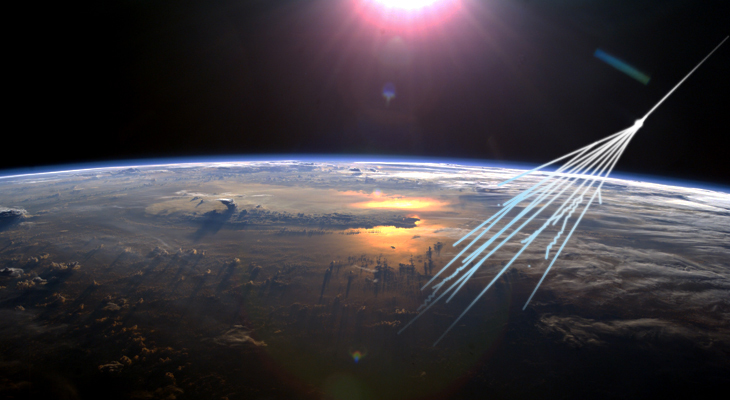 By Charles Choi, Inside Science -
Of all the parts of the nation's infrastructure that one might want least to fail, nuclear power plants might rank the highest.

U.S. nuclear power plants are on average more than 30 years old now, and pipes within them can corrode over time with potentially lethal results. Now researchers suggest they could non-invasively scan infrastructure for weak points with the aid of subatomic particles streaking down from the sky.

Water and steam pumped through a pipe in a power plant or industrial refinery can eat away one side of the pipe. In 2004, such corrosion led a pipe to break at Mihama Nuclear Power Plant in Japan, killing five people and injuring six others with super-hot high-pressure steam in Japan's worst nuclear power accident until Fukushima.

"These scans are typically pretty invasive," said researcher Matt Durham, a nuclear physicist at Los Alamos National Laboratory in New Mexico. “You have to turn the pipes off and strip them of insulation.”

Durham and his colleagues now propose scanning infrastructure with subatomic particles known as muons. These electrically charged particles are essentially identical to electrons, except for being more than 200 times heavier.

Formed when cosmic rays from outer space crash into molecules in Earth’s upper atmosphere, roughly 10,000 muons strike each square meter of our planet’s surface every minute. "Muons are much more penetrating than X-rays," Durham said. About one mile (1.6 kilometers) below the surface of Italy's Gran Sasso Mountain, Durham said, one of his colleagues detects 1 muon per square meter per hour.

When muons zip through an object, their trajectories change depending on the density of the object. By comparing the trajectories of muons as they pass in and out of items such as pipes and determining how much the particles are scattering, a technique known as muon tomography, researchers can identify features such as defects within those objects that are hidden from view.

"We can use muons to keep an eye on infrastructure in a noninvasive manner without requiring downtime of whatever we are scanning," Durham said.

The research team's detectors each consisted of 12 layers of gas-filled aluminum tubes, each containing a single thin wire kept at high voltage. One detector was placed above the object to be imaged and one was placed below to analyze the trajectories of muons before they entered and after they exited the object. As muons pass through the tubes, they knock electrons off the gas, and the detectors track where these electrons hit the wires to reconstruct the paths of the muons.

The detectors could distinguish between concrete tile and stainless steel pipes of different thicknesses, with denser, thicker objects deflecting muons more than lighter, thinner items. This could help reveal whether pipes are dangerously thin due to corrosion. They could also see whether check valves, which control the flow of materials through pipes, were open or closed. Potentially, this could help determine whether they are operating properly. "You might be able to prevent an accident at a nuclear reactor with this," said experimental particle physicist Cas Milner at Southern Methodist University in Dallas, who did not take part in this research.

Durham conceded that ultrasound and X-ray scans have resolutions hundreds to thousands of times better than muon tomography. "The big advantage of muon tomography is that it's completely noninvasive," Durham said. "You could use muon tomography to scan large sections of infrastructure, and only use ultrasounds or X-rays when you find something of concern, minimizing invasive tools you need downtime for."

Muon tomography is also slow. "One can get good images on the timescale of 4 to 12 hours, so you could imagine starting measurements at one spot in an industrial plant at the beginning of one work shift and then moving it to the next spot at the start of the next shift," said Durham.

These detectors weigh about 360 kilograms (800 lbs.) each, heavy enough to require a forklift but much lighter than the detectors used at Fukushima. Durham and his colleagues say they could be made much smaller and up to about five times lighter by using carbon fiber instead of aluminum.

The scientists detailed their findings June 30 in the journal AIP Advances.

Charles Q. Choi is a freelance science writer based in New York City who has written for The New York Times, Scientific American, Wired, Science, Nature, and many other news outlets. He tweets at @cqchoi. Inside Science is an editorially independent news product produced by the American Institute of Physics. AIP Publishing, a wholly owned subsidiary of the American Institute of Physics, publishes the journal AIP Advances, which is mentioned in the above article. Earth image credit NASA and composite image by Michael Greshko.

Charles Q. Choi is a freelance science writer based in New York City who has written for The New York Times, Scientific American, Wired, Science...