Grammar as an Evolutionary Process

A major purpose of this short series is to show that the grammar, the set of rules for using a language, is a product of evolution, a continually evolving product of natural selection. A natural grammar is not a set of rules by which generations of speakers and writers should be forced to clone their language. For any living language it is the users in the mass who control its direction and growth. To ignore that reality is to ignore human psychology. A living language is the only truly democratic institution on the face of the Earth. What the people want is what they get. For every would-be 'expert' who votes with the pen there are tens of thousands who vote with the tongue.

Fortunately, the people who instruct us to never at all split an infinitive, to never start a sentence with an adverb and to never - horror of horrors - end a sentence with a preposition are not long by ordinary people put up with.

Of course, the foregoing sentence is not a good example of clarity in writing. But there is nothing whatsoever in any way, shape or form wrong with it according to the naturally evolved rules of the grammar of the English language.   Human language is the very model of evolution in action.   Languages merge, languages split; they diverge and converge; they parallel biology greatly in the origins of their species.  A language may, like Latin, be bred 'true to type' by experts, so that it eventually dies, breathless.  Or it can be given full freedom by the parliament of its people, so that it may spread its joyful song throughout the world.

The Influence of Shakespeare

It is impossible in a series of short articles to give credit to the many hundreds of people who contributed to the re-establishment of English as England's national language, to its growth, embellishment, standardisation and stability.  The period of development of the English language known as the Early Modern English period covers approximately the three centuries from the Tudor period onwards. The Tudor period's greatest son is Shakespeare.   No student of the English language should miss the chance to discover the sources of Shakespeare's inspiration.

Raphael Holinshed, (c.1525-1580?), was commissioned by the printer Reginald Wolfe to write a history of the world. This was finished after Wolfe's death, the joint production of a number of authors. Published in two volumes in 1577 it is now known as Holinshed's Chronicles. The Chronicles have been shown by modern scholars to have been the source of much of Shakespeare's historical knowledge. The section on Macbeth is very enlightening.
C.E.M.S. Oxford University

Holinshed's Chronicles are still not fully studied. New material has just (April 2009) come to light quoting from the Vita Ædwardi Regis - the life of Edward the Confessor.  The surviving original Anglo-Saxon text is incomplete, so this is an exciting discovery for historians.
C.E.M.S. News

To do justice to the development of the English language from the time of Shakespeare to the founding of the United States of America would require at least a whole book. How does one sum up in a few paragraphs the history of so many years? Explorers and adventurers brought to English new words for new cultures, new languages, new plants, new animals and new products. The many wars contributed military terms.  Scholars began to translate academic and literary books into English. Authors of popular works wrote mainly, or even entirely, in English.

The Roman Catholic Church, so long a major influence in England, lost its power. Henry VIII declared himself head of the English Church, denying the right of a distant Pope to dictate to an English king. Latin continued to be the official language of the church, and it was some time before an English translation of the Bible was officially accepted. But the Latin of the church was classical Latin. The official church would not give house room to the medieval vernacular Latin.

The Influence of The Bible

No history of the English language, however short, should fail to mention the 'authorised' bible. The influence of English translations of the Bible on the language itself is immense. If one views the Bible, not from a religious, but from a politico-economic perspective, there are insights to be found. The ruling classes already had an official French version of the Bible. There was a demand for an English Bible for the benefit of the common people. Not as readers, but from ordinary people as an audience. In an age of widespread illiteracy, people wanted to hear, not an unintelligible  'mumbo-jumbo' of Latin words that they could not comprehend, but biblical stories in their own language.

Wycliffe's Bible was the earliest translation with a wide distribution. It is a too-literal translation from Latin, with English words forced into a Latin mould.  It contributed to the spread of English literacy, and added to the vocabulary,  but its impact on the language comes mostly from its having shown that there was a great demand for an English Bible. William Tyndale's Bible was translated into a more vernacular English from older Hebrew and Greek texts. Tyndale was arrested on the orders of Henry VIII and ultimately burned at the stake for his pains.

Henry VIII, a king never know for his piety, ordered the production of an English bible to be read aloud in church. The Great Bible, named for its physical size, incorporated elements from Tyndale's Bible, but 'corrected' to conform to the prevailing theological ideas and the king's wishes.  The Great Bible incorporated elements from the Latin Vulgate Bible, itself a multiply translated and 'corrected' version of older texts.

The Byble in Englyshe : that is to saye the content of all the holy scrypture, both of ye Olde and Newe Testament, truly translated after the veryte of the Hebrue and Greke textes, by ye dylygent studye of dyuerse excellent learned men, expert in the forsayde tonges.

The influence of the King James, or Authorised version of the Bible lies not in its accuracy, but in its self-consistency and poetry. Great care was taken to ensure consistency of spelling and phraseology throughout. The quality of the writing was excellent, becoming a model for generations of English speakers and writers even into the 20th century. For all its beauty, the King James Bible was a deliberately inaccurate translation.  Parts which might give rise to a disaffection of the working classes were modified.  Biblical advice against misrule was toned down.  References to the rights of the congregation - the people - were subverted into the rights of the Established English Church.  Politics aside, it was a work of linguistic art. 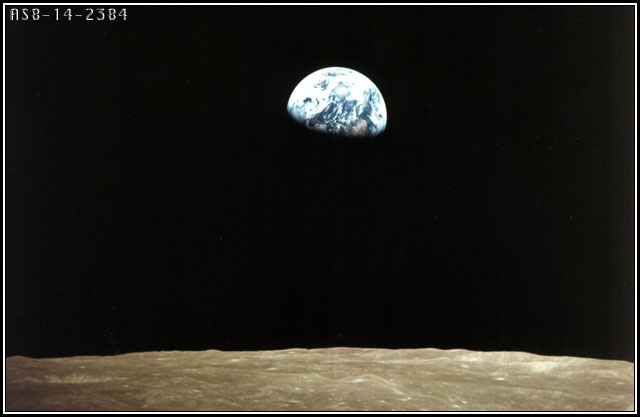 William Anders:
"For all the people on Earth the crew of Apollo 8 has a message we would like to send you".

Frank Borman:
"And God said, Let the waters under the heavens be gathered together unto one place,
and let the dry land appear: and it was so.
And God called the dry land Earth;
and the gathering together of the waters called he Seas:
and God saw that it was good."

Published in 1611, the King James Bible is an astounding achievement for its day. It can still be read by any averagely literate English speaker. Only a few words have lost or changed their meanings over the centuries. Anyone who learned their English only from this Bible could be readily understood in any country where English is spoken, although they would probably sound very old-fashioned.

For all its hidden political messages, through its linguistic powers the King James Bible was so much a part of the belief systems of English speakers that a more accurate translation of 1970 was rejected by many Christians at that time, both practising and nominal. Such is the strange power of language when it is a cultural norm. It resists enforced change as though it were a living, breathing, beautiful creature of nature.