This article is a continuation and expansion of the theory of mental models, introduced in part #4.

Part #1 of this series outlines the need for an inclusive theory of language based in science.  Part #2  was an overview of the use of linguistic error-handling processes as an aid to reliability and predictability of communication.  Part #3  introduced the topic of conformity - the observation that language users broadly conform to a set of social norms of language.


The Depths Of Meaning

We do not simply understand words as lumps of language.  Nor do we understand words in terms of dictionary definitions.  I suggest that we understand words with the whole mind and body.  For example, the words 'cookie' and 'apple' arouse memories of handling and eating real-world examples of 'cookie' and 'apple'.  On using the word, the associated recall is subtle, but instant.  The source - the means of obtaining the thing; the utility - what it is good for; the taste; the texture; the smell; the uneaten remains; memories of associated faces and places, and many, many more aspects are recalled.

We understand the things in our environment mainly in terms of our interaction with them.  This combination of handling and sensing things is mapped to the sensorimotor cortex.  The mapping has been shown by experiment to represent the body's parts in amounts of cortex proportional more to the functionality than the size of body parts.  This suggests that mental models may be expressed in like manner, with the attributes of a thing being modelled with details somewhat proportional to the respective proportions of sensorimotor cortex. 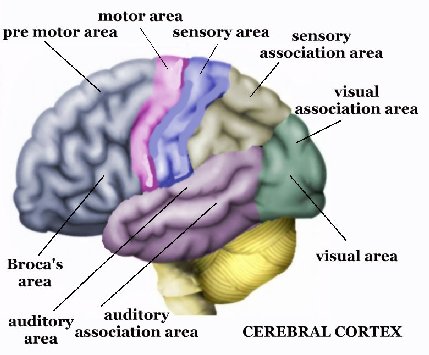 The cerebral cortex has areas dealing with sensory input; motor (muscle) control areas and association areas. Association areas deal with complex functions such as learning, decision making and complex muscular control.  The sensory cortex and the motor cortex have been mapped to the body parts they  control. A large proportion of the sensorimotor cortex is involved with the lips, face, hands and feet.

The visual area receives and processes signals from the eyes.  The visual association area helps to interpret those signals and is also involved with memory and recognition.  Broca’s area, the motor speech area, is involved in converting ideas into speech. This area controls the organs of speech.  The auditory area handles sounds. The auditory association area deals with sound as noise, music or speech.


Words As Labels For Mental Models

I suggest that the referent of any word is a mental model, rather than any external reality.  Since some concepts labelled by words can have no external referent, as e.g. 'unicorn', it seems parsimonious to have an evolved mechanism whereby all referents for words are internal, rather than some only.  In addition, it would seem that an evolved mechanism for constructing representations of external realities could readily be exapted to the modelling of abstract ideas.

A mental model of an external (environmental) object or action will model all sensory and motor modalities which are of any relevance to the object or action.  The prominence of a sensorimotor modality in a model will, I suggest, be governed primarily by the prominence of that modality in the sensorimotor cortex.  In general, this will give the visual and haptic senses primacy in the mental models of most things.

A mental model as the referent for a word exists in the mind of the person speaking, writing, hearing or reading the word or phrase.  For communication to be adequate, mental models must conform to a social norm.  In the realm of the purely physical, conformity within a range of tolerances may be assured: people will readily agree about the classification of most objects into sets.  A major area for misunderstanding is in the emotional associations, the connotations of words.

Any word can carry an emotional load.  For one person, 'tree' can conjure memories of the enjoyment of fruit; for another the memory may be of a tumble and a broken leg.  If a fairly innocuous word such as 'tree' can trigger emotions, it may readily be seen how words related to social interactions can arouse emotions.  The rules of conformity which I postulate for words and for their underlying mental models would seem to apply also to the emotional content of mental models.  Within broad limits, groups will adopt or accept a particular emotional 'spin' on words.  When other groups insist on a different spin there is a conflict of opinion.

Acts, actions, activity and motion can all be modelled.  For any physical object, its degrees of freedom - the ways in which it can move or be moved - can be readily modelled.  For the sake of simplicity only twelve major modes of motion need be demonstrated, ignoring for the moment animal locomotion.  There are three axes of rotation and translation, and motion may be cyclic or continuous.  I suggest that mental models of motion in the abstract could be based on simple abstract shapes.  Thus rotation may be modelled as a rotating frame of reference which can be associated with, or overlaid on any model of an object.

Language has, I suggest, only three functions: command, information and pleasure.  Those functions can be performed by first linking mental models into a compound idea.  The words which label the mental models form the first expression of the idea as language.  Such a basic idea may actually be expressible directly as speech: "You give me fish."  In order to reduce the possibility of mis-understanding, the form of the expression is modified: the output sentence is made to conform to the error-correction and error-preemption codes of the community.  I suggest that it is this error-handling layer that gives an instance of language the appearance of being the product of rules of syntax.

The mechanism - the semantic grammar - which causes ideas as connected models to be converted into language as connected words can be used to recover models from words.  With the help of the error-handling components, the brain recovers the core words and thus the core models with the requisite interconnections.

The giving and receiving of information is, I suggest, the most important function of language.  The giving of information may well be linked to the brain's self-rewarding abilities.  It is a common observation that small children, having discovered some fact which is new to them, seem to have an urge to share.  This 'instinct' for the sharing of facts, unlike the sharing of physical things, seems to arise without needing to be taught.

Children are notoriously inquisitive.  They are eager to learn the answers to questions about anything and everything.  They want to know what a thing is called, what it is for, where it comes from.  These simple questions can be made the foundation of a whole new perspective on language: quistic grammar.  In quistic grammar, any statement can be analysed as if it answered one or more simple questions.  Information is both the thing sought by a questioner and the thing given by an answerer.  Questions and answers can be brought into one-to-one correspondence by a simple process of rephrasing.  They are informational equivalents.

Quistic grammar will be covered in greater depth in part 6.

Related articles in my blog, The Chatter Box.
A Journey to the Centre of the Universe
Digging Beneath the Surface of Grammar
The Chatter Box
More Articles All Articles
About