Part #1 of this series outlines the need for an inclusive theory of language based in science.  Part #2
was an overview of the use of linguistic error-handling processes as an aid to reliability and predictability of communication.  Part #3  introduced the topic of conformity - the observation that language users broadly conform to a set of social norms of language.  Part #4  introduced the theory of mental models, continued and expanded  in Part #5.

This article is about quistic grammar: a semantic grammar based on the observation that any statement in human language can be re-phrased as one or more simple questions.

In part 5, I stated:
"Children are notoriously inquisitive.  They are eager to learn the answers to questions about anything and everything.  They want to know what a thing is called, what it is for, where it comes from.  These simple questions can be made the foundation of a whole new perspective on language: quistic grammar. "  I shall now expand and further explain that idea.

Traditional grammars focus mainly, or even exclusively, on syntax.  Syntax, simply put,  is a set of rules for the arrangement of words in a sentence and for conformity of number, gender and locations in time and space.  In the ordinary, everyday use of language people tend to unconsciously adopt the social average of syntax, within a range of values, or tolerances.  Whilst natural grammar is tolerant of variations, for some centuries the school grammars were rigid and intolerant.

Modern grammars as teaching aids tend to be more flexible, and can be an excellent guide to clarity in the use of a language.  But for all that, they do not have a very strong foundation in science.  Specifically, syntax alone cannot show how people come to choose one word or phrase over another which might equally suit the situation.   Given a range of similes and metaphors, traditional grammarians may be bold enough to suggest that some are an undefined 'better grammar' than others.  But syntax is silent about selection on the basis of informational content.

The whole purpose of language is to convey information.  The linguist who fails to build a language theory on a solid foundation of semantics misses the whole point of the exercise.

In quistic grammar there are two broad word categories, approximating to the 'content words' and 'grammar words', or categorematic and syncategorematic words of grammatical tradition.  The 'content words' of quistic grammar are the labels for mental models; the 'grammar words' are the error-handling cues which make communication of ideas more reliable.

For clarity, and to avoid confusion with existing nomenclature, I shall refer to the labels, and to the labelled mental models as nuons.  The other components of speech, the grammar words, affixes and other syntactic components are quons, the error handling codes or cues.  Nuons convey the core information in speech, and quons serve the functions of error-correction, error preemption, disambiguation and such.

For the sake of simplicity, a nuon may be thought of as the word or token which labels a mental model.  More accurately, it should be thought of as a token standing in place of an idea expressed as a mental model.  Mental models can be of static objects and properties or dynamic properties.  A nuon which models a static thing, an object, is tokenised by a noun.  A nuon which models a dynamic thing, an act, action, event or process is tokenised by a verb.

A nuon is a mental model: an abstraction of the common properties of all members of a class of some 'thing',  modelled in some way as richly interconnected neurons.  A nuon is not a simple 'visual' abstraction.  A nuon is an encoded abstraction of links to many sensory modalities, emotions and memories.  The abstraction, or model, is labelled with a token.  The token has a direct correspondence with whatever the word or words are in the relevant language which activate the relevant nuon and thus cause an experience of sensation.  That point needs to be emphasised.  In quistic grammar, the 'meaning' conveyed to a human by any informational word is sufficiently defined as: the experience of feelings and memories activated by the nuon associated with the word.

The picture below shows a very rough overview of the nuon-to-speech semantic process.  Nuons in a speaker's brain are coded as words, recoded using error-handling and compression codes and finally spoken.  The speech is then parsed by the hearer, and the hearer's relevant mental models are activated. 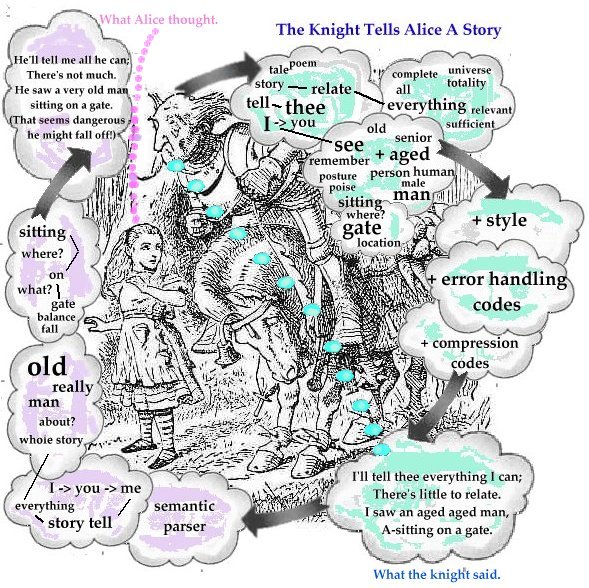 To reiterate: nuons are neural structures which encode aspects, attributes and associations of things.  Interconnections between nuons can inhibit or excite specific parts of nuons.  For example, if a thing is invisible, then its nuon will inhibit any association with the experience of vision in connection with that thing.  Any average person, on being asked "Can you see air?" will intuitively answer "No."  Intuitively because there is no need for the brain to search a list of 'things people can see'.

Nuons comprise, for any 'thing', all modes of perception, all memories, all 'facts', all emotions, everything the brain knows or feels about the thing coded by the nuon.  The token which labels the nuon may be thought of as a pointer to the generic, root or core form of a word.  For bilinguals, I suggest, the token is a pointer to alternative word roots.

A bilingual or multilingual person will have relatively few nuons exclusive to one or another language.  For the most part, a single nuon with alternative words associated to its token will suffice.  In so many languages, a rose, rosa, роза, roze smells just as sweet.