Carl Philipp Gottfried von Clausewitz is famous for his book Vom Kriege - On War.  In that book he is very specific in stating that there is no 'science of war'.

In order for someone to state quite categorically that an area of study is not a science they must first know enough about science to be able to determine the matter scientifically.

On War is not a science book.  But I invite my readers to agree with me that Clausewitz was a scientist.  His methods are clearly those of the forensic scientist: from the factual evidence, determine the probable causal chain.  Elementary, my dear Watson.

From the simple narration of an historical occurrence which places events in chronological order, or at most only touches on their more immediate causes, we separate the CRITICAL.

In this CRITICAL three different operations of the mind may be observed.

First, the historical investigation and determining of doubtful facts. This is properly historical research, and has nothing in common with theory.

Secondly, the tracing of effects to causes. This is the REAL CRITICAL INQUIRY; it is indispensable to theory, for everything which in theory is to be established, supported, or even merely explained, by experience can only be settled in this way.

Thirdly, the testing of the means employed. This is criticism, properly speaking, in which praise and censure is contained. This is where theory helps history, or rather, the teaching to be derived from it.

In these two last strictly critical parts of historical study, all depends on tracing things to their primary elements, that is to say, up to undoubted truths, and not, as is so often done, resting half-way, that is, on some arbitrary assumption or supposition.

Clausewitz shows how to approach truth across a minefield of misinformation

Great part of the information obtained in War is contradictory, a still greater part is false, and by far the greatest part is of a doubtful character. What is required of an officer is a certain power of discrimination, which only knowledge of men and things and good judgment can give. The law of probability must be his guide.

This is not a trifling difficulty ... but it is enormously increased when in the thick of War itself one report follows hard upon the heels of another; it is then fortunate if these reports in contradicting each other show a certain balance of probability, and thus themselves call forth a scrutiny.

It is much worse for the inexperienced when ... one report supports another, confirms it, magnifies it, finishes off the picture with fresh touches of colour, until necessity in urgent haste forces from us a resolution which will soon be discovered to be folly, all those reports having been lies, exaggerations, errors, &c. &c.

In a few words, most reports are false, and the timidity of men acts as a multiplier of lies and untruths.

This difficulty of seeing things correctly, which is one of the greatest sources of friction in War, makes things appear quite different from what was expected. The impression of the senses is stronger than the force of the ideas resulting from methodical reflection, and this goes so far that no important undertaking was ever yet carried out without the Commander having to subdue new doubts in himself at the time of commencing the execution of his work.

But even the man who has made his own plans, when he comes to see things with his own eyes will often think he has done wrong. Firm reliance on self must make him proof against the seeming pressure of the moment; his first conviction will in the end prove true, when the foreground scenery which fate has pushed on to the stage of War, with its accompaniments of terrific objects, is drawn aside and the horizon extended.

Long before Darwin's Bulldog used The Method of Zadig, long before the original Sherlock Holmes used The Method, Clausewitz was defining the method of using analysis of evidence to determine causality.

Clausewitz has been blamed by some for encouraging the military mindset that led to two world wars.  I disagree.  Clausewitz consistently demonstrates that defence has advantages over offence.  Here is an example, not from On War, but from history. 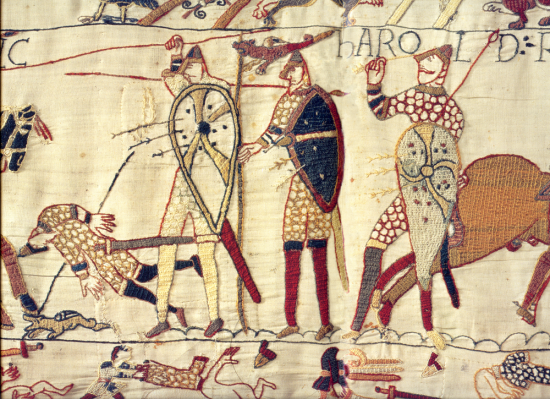 At the Battle of Hastings the Normans were getting a pasting from the defenders until some of King Harold's men broke ranks to pursue a seemingly retreating enemy.  They wanted more results, and faster, but handed 'more and faster' to the Normans as a gift.

I use the term 'more and faster' to describe a whole class of human demands, and the economic model that creates and meets such demands.  In any dispute between groups, the cheapest solution is obstructive resistance.  But in a 'more and faster' world, a powerful first strike may seem like a good idea.  Which - as history continually shows - it isn't.

Passive resistance implies the mere doing of nothing.  That never stopped tyranny.  Obstructive resistance, however, can bring even the greatest empire to its knees.

The immediate object here is neither the conquest of the enemy's territory nor the defeat of his armed force, but merely to DO HIM DAMAGE IN A GENERAL WAY.
...

The third [way], by far the most important, from the great number of cases which it embraces, is the WEARING OUT of the enemy. We choose this expression not only to explain our meaning in few words, but because it represents the thing exactly, and is not so figurative as may at first appear. The idea of wearing out in a struggle amounts in practice to A GRADUAL EXHAUSTION OF THE PHYSICAL POWERS AND OF THE WILL BY THE LONG CONTINUANCE OF EXERTION.

Now, if we want to overcome the enemy by the duration of the contest, we must content ourselves with as small objects as possible, for it is in the nature of the thing that a great end requires a greater expenditure of force than a small one; but the smallest object that we can propose to ourselves is simple passive resistance, that is a combat without any positive view. In this way, therefore, our means attain their greatest relative value, and therefore the result is best secured. How far now can this negative mode of proceeding be carried? Plainly not to absolute passivity, for mere endurance would not be fighting; and the defensive is an activity by which so much of the enemy's power must be destroyed that he must give up his object. That alone is what we aim at in each single act, and therein consists the negative nature of our object.

No doubt this negative object in its single act is not so effective as the positive object in the same direction would be, supposing it successful; but there is this difference in its favour, that it succeeds more easily than the positive, and therefore it holds out greater certainty of success; what is wanting in the efficacy of its single act must be gained through time, that is, through the duration of the contest, and therefore this negative intention, which constitutes the principle of the pure defensive, is also the natural means of overcoming the enemy by the duration of the combat, that is of wearing him out.

Here lies the origin of that difference of OFFENSIVE and DEFENSIVE, the influence of which prevails throughout the whole province of War. We cannot at present pursue this subject further than to observe that from this negative intention are to be deduced all the advantages and all the stronger forms of combat which are on the side of the Defensive, and in which that philosophical-dynamic law which exists between the greatness and the certainty of success is realised. We shall resume the consideration of all this hereafter.

If then the negative purpose, that is the concentration of all the means into a state of pure resistance, affords a superiority in the contest, and if this advantage is sufficient to BALANCE whatever superiority in numbers the adversary may have, then the mere DURATION of the contest will suffice gradually to bring the loss of force on the part of the adversary to a point at which the political object can no longer be an equivalent, a point at which, therefore, he must give up the contest. We see then that this class of means, the wearing out of the enemy, includes the great number of cases in which the weaker resists the stronger.

As Clausewitz might have said, but didn't, on the topic of 'all standing together with our backs against the wall': Nothing unites people more in a common cause than the perception of being oppressed.

Was Clausewitz the first person to write on intelligence analysis?

Did Clausewitz write about and use abductive reasoning long before Charles Sanders Peirce formalised the concept?

Where else but at http://www.science20.com/ do you get to see those three names together in a single sentence?
.
The Chatter Box
More Articles All Articles
About