An article in AIG News, the Australian Institute of Geoscientists Quarterly Newsletter No. 97 August 2009, purports to state that collapse of the Greenland and Antarctic ice sheets is impossible.

In this critique I demonstrate the writers' use of straw man arguments and other unscientific methods to support their arguments.

I commence with the authors' abstract and conclusions.  The body of the text will be dealt with in due course.

Why the Greenland and Antarctic Ice Sheets are Not Collapsing.
Cliff Ollier and Colin Pain

Global warming alarmists have suggested that the ice sheets of Greenland and Antarctica may collapse, causing disastrous sea level rise. This idea is based on the concept of an ice sheet sliding down an inclined plane on a base lubricated by melt water, which is itself increasing because of global warming.

In reality the Greenland and Antarctic ice sheets occupy deep basins, and cannot slide down a plane. Furthermore glacial flow depends on stress (including the important yield stress) as well as temperature, and much of the ice sheets are well below melting point.

The accumulation of kilometres of undisturbed ice in cores in Greenland and Antarctica (the same ones that are sometimes used to fuel ideas of global warming) show hundreds of thousands of years of accumulation with no melting or flow. Except around the edges, ice sheets flow at the base, and depend on geothermal heat, not the climate at the surface.  It is impossible for the Greenland and Antarctic ice sheets to 'collapse'.

Conclusion
The global warming doomsday writers claim the ice sheets are melting catastrophically, and will cause a sudden rise in sea level of many metres. This ignores the mechanism of glacier flow which is by  creep: glaciers are not melting from the surface down, nor are they sliding down an inclined plane  lubricated by meltwater.  The existence of ice over 3 km thick preserving details of past snowfall  and atmospheres, used to decipher past temperature and CO2 levels, shows that the ice sheets have accumulated for hundreds of thousands of years without melting. Variations in melting around the edges of ice sheets are no indication that they are collapsing.  Indeed 'collapse' is impossible.

If the authors' intent in using the term 'collapse' was to address a lay audience, then of course ice sheets do not collapse in a mechanical fashion like a pack of cards.  However, if 'collapse' is used in a scientific sense of application to a climatic system, then of course collapse is possible: systemic collapse.

To the best of my knowledge, no scientist has suggested that the whole Antarctic ice sheet is prone to collapse in the foreseeable future.  The WAIS - the West Antarctic Ice Sheet appears, however, to be in a state of change, possibly a prelude to systemic collapse.

My attention was drawn to the unscientific nature of choice of words: "Global warming alarmists", "global warming doomsday writers" and ice cores "used to fuel ideas of global warming".  Those phrases, seeming to indicate a possible lack of objectivity, led me to research the authors' topic in some depth.

Although the article was published in AIG News, it hardly constitutes news.  The article has been published before with minor variations.

2007 THE GREENLAND-ANTARCTICA MELTING PROBLEM DOES NOT EXIST  Cliff Ollier
http://icecap.us/images/uploads/THE_GREENLAND.doc

November 08 2007 Are the Greenland and Antarctic Ice Sheets in Danger of Collapse? Cliff Ollier
http://www.ff.org/index.php?option=com_content&task=view&id=396

Aug 25, 2009 Why the Greenland and Antarctic Ice Sheets are Not Collapsing
Cliff Ollier and Colin Pain
http://icecap.us/index.php/go/new-and-cool/why_the_greenland_and_antarct...

Aug  2009 Why the Greenland and Antarctic Ice Sheets are Not Collapsing
Cliff Ollier and Colin Pain
http://aig.org.au/assets/244/AIGnews_Aug09.pdf

The properties of ice and ice flow

The authors begin by challenging the idea that ice slips down a plane on a bed of meltwater: this mechanism has no relevance to the mechanics and dynamics of an ice sheet.  It does have some relevance to glaciers, but in the context of ice extended in sheets it is something of a straw man argument.

The authors proceed to explain the melting of glaciers at their foot or terminus where the lower altitude brings the ice into warmer air.  This mechanism is widely known and has no direct relevance to ice sheet melting.


The article next proceeds to explain flow and creep in ice.  The authors at one stage refer to ice as 'plastic' and at another as 'crystalline'.  The explanation of crystal formation and growth appears to be as accurate as is needful for the purpose of the article.

The article makes no mention of the effect on the melting point of vein water in polycrystalline ice.  Nor do they explain the contribution of trapped water pockets and basal high pressure water to surges and slippage in ice.

The authors claim that ice sheets do not melt at the surface:

Some of the present-day claims that ice sheets 'collapse' are based on
false concepts.  Ice sheets do not melt from the surface down - they
melt only at the edges.
...
...
The very ice cores that are used to determine climates over the past 400,000 years also show that the ice sheet has accumulated over that period by stratigraphic layers of snow and has not been deformed or remelted.  The mechanism portrayed by Christoffersen and Hambrey, of meltwater lakes on the surface finding their way down through cracks in the ice and lubricating the bottom of the glacier is not compatible with accumulation of undisturbed snow layers. It might conceivably work on valley glaciers, but it tells us nothing of the 'collapse' of ice sheets

These statements - that ice sheets do not melt at the surface - have no foundation in fact. 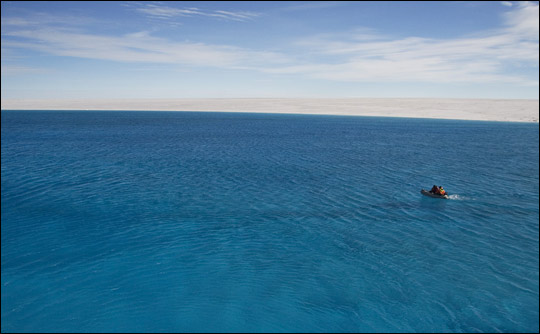 As the surface of the ice sheet melts, rivers of water flow on the surface, eventually collecting in huge blue pools atop the ice or plunging into deep crevasses.
http://earthobservatory.nasa.gov/Features/Greenland/printall.php

Researchers from the Woods Hole Oceanographic Institution (WHOI) and the University of Washington (UW) have for the first time documented the sudden and complete drainage of a lake of meltwater from the top of the Greenland ice sheet to its base.
April 2008


Ice is not a single material

The authors next suggest that geologists may best understand sheet ice as a mono-mineralic metamorphic rock.  In many instances, ice is more like a sedimentary rock but there is one striking difference: the planes in ice are much freer to slide than the planes in sedimentary rocks.  Folding and slippage in rock requires much greater forces than the gravitational forces that drive ice motions.

The authors suggest that ice sheets may have formed in pre-existing basins rather than the weight of ice being the cause of the depression.  This is not of any great relevance to the matter of whether or not ice sheets can collapse. 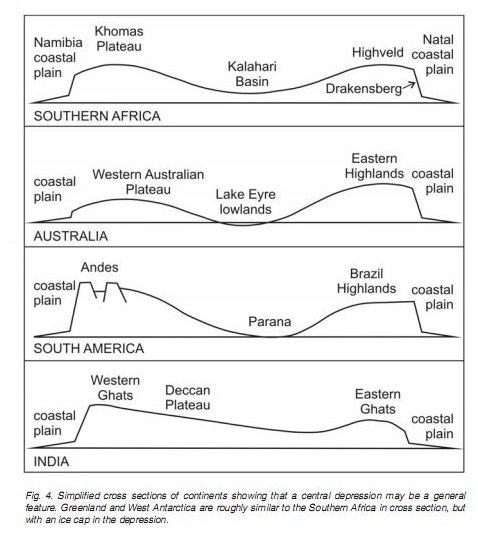 The Kalahari basin is a post-glacial basin.
http://www.sciencedirect.com/science?_ob=ArticleURL&_udi=B6V6R-4894W1X-6...

The Paraná Basin (1 600 000 km2) is the largest intracratonic basin in southern South America and contains a thick (1300 m) Permo-Carboniferous glacial succession (the Itararé Group). This paper describes over 1700 m of drill core recovered during recent exploration for oil and gas. Itararé Group sediments consist of massive and stratified diamictites interbedded with massive and graded sandstones, and massive and laminated mudstones. Facies are interpreted as the product of sediment gravity flows in a glacially influenced marine basin.

The Deccan basin was formed during the 'snowball earth' event.  It is as likely as not, I suggest, that glaciation contributed to its shape.


The ice cores - a flawed argument

The authors reference ice cores in their statements that surface melting doesn't happen.  They refer to ice cores again in their conclusions:

The existence of ice over 3 km thick preserving details of past snowfall  and atmospheres, used to decipher past temperature and CO2 levels, shows that the ice sheets have accumulated for hundreds of thousands of years without melting.

Ice cores are taken from locations as far from known meltwater sources as possible.  Cores which contain refrozen meltwater are fairly useless as tools of geochronology and are discarded.  The non-existence of a meltwater record in selected ice cores is not evidence that melting has never occurred.

The authors' statements about ice cores appear to be a strange instance of critics disregarding the obvious cherry-picking of data collectors.  I would categorise that as  inverse cherry-picking.

There appears to be a lack of due diligence in the authors' researches.

There are also some very basic errors of fact.

I am confident that this paper would not have passed a rigorous scientific peer review process.