As I write these words, media reporters and bloggers are gleefully reporting the recovery of the Arctic ice.

There has been snow in many parts of the northern temperate zone recently, and, predictably, there have been cries of "what happened to global warming?"

It is Spring.  The evidence of global warming is all around for anyone who has eyes to see it.  But there are none so blind as those who will not see.

George Orwell's book 1984 is famous for its portrayal of a system within which truth is whatever people with short attention spans remember hearing from the media.  Never mind that the media reported a crop surplus last month - it can be shown in the records that a famine was reported.

Propagandists are good at this sort of thing.  In the 1970s the majority scientific opinion was that the climate was changing, but in the absence of sound data, it could not be predicted with any certainty whether we would see future warming due to CO2 emissions or cooling due to other emissions.  A small majority of papers suggested that a continued CO2 rise would cause global warming.  Either way, emissions were a major problem.

A few magazines and newspapers printed highly speculative articles at that time proclaiming a new ice age.  News reports are not scientific papers.  They don't count.  Current stories that "scientists said in the 1970s that we were in for global cooling" are pure propaganda - George Orwell's Big Brother would have loved it!

The San Diego conference of April 1974 concluded after two days of discussions:

We will not soon return to the climate patterns of the recent past.

Here's what I have been writing in 2010 about the 'global cooling' nonsense that is currently being peddled:
January 11, in  Global Cooling: A Good Story, If Only It Were True:

"According to Daily Mail reports of 10th and 11th January 2010, we are now entering a phase of global cooling."

January 15, in Global Cooling : How Wrong Can You Get?:

"Despite media reports to the contrary, the Antarctic ice is still melting, ...".

January 16, in Global Cooling : Beyond Parochialism, an article about people who fail to observe that the northern and southern hemispheres have different seasons:

"Parochialism leads people in the north to accept the current nonsense of 'global cooling' based only on their own immediate experiences and what is reported to them in the media."

February 7 in Arctic Melt 2010 Is Faster Than Models Predicted:

Sea ice in Canada’s fragile Arctic is melting faster than anyone expected, the lead investigator in Canada’s largest climate-change study yet said Friday — raising the possibility that the Arctic could, in a worst-case scenario, be ice-free in about three years.
http://www.canada.com/technology/...

Meanwhile, the northern hemisphere's widespread snow was bringing forth the expected rants against 'warmists', even while droughts were causing problems In China And Tibet.

February 7, in The Price Of Arctic Ice:

In economic terms, estimated costs in 2010 from the decline in albedo and increase in methane emissions range from $61 billion to $371 billion.  By 2050, this number rises to a cumulative range of $2.4 trillion to $24.1 trillion.
...
“At the mid-range of our estimates, the cumulative cost of the melting Arctic in the next 40 years is equivalent to the annual gross domestic products of Germany, Russia and the United Kingdom combined.”
http://www.pewtrusts.org/news_room_detail.aspx?id=57159

And still the hopelessly bogus stories circulated about 'no global warming' and the Arctic ice either not really melting, or recovering nicely thank you, or just doing what it always did.  Open water seen at the pole?  No problem.  USS Skate surfaced at the pole and it was open water - just look at the picture!   The picture used was selected from many available to prove a bogus point.

They should have used this picture, taken at the north pole.  As a matter of historical record reported at the time by the world's major newspapers, the sub broke through the ice and some of the crew disembarked onto the ice to scatter the ashes of
Sir George Hubert Wilkins MC&Bar: Crew of the USS Skate during the memorial ceremony for Wilkins on March 17, 1959 -
Wilkins 35-5-4.  http://library.osu.edu/sites/archives/polar/nautilus/checklist.htm

Even Dr. Tim Ball got into this writing of nonsense on ice, 'proving' that the USS Skate surfaced in open water and 'proving', with bogus map pictures, that:

Arctic climate models are useless because models are built on data and
there is none for the Ocean area and most of the surrounding land.

A media reporter or a blogger may be forgiven for Cherry Picking At The Tree Of Knowledge, but not a scientist.

The weather warmed up a little, but the Arctic Oscillation hadn't quite done with its tricks for the year.  I suggested, March 28, in More Snow Anyone? that we were in for a few more 'whatever happened to global warming' comments from parochially blinkered commenters.  Just check, e.g., this Scottish paper: http://news.scotsman.com/scotland/Snow-hits-Scotland--again...


Is the Arctic ice melting or not?

In 'Beyond Parochialism' I made some predictions, including this one:

So - what is the current state of the north west passage?

Open Water in the Northwest Passage

Yesterday, unfavorable weather grounded the DC-8 in Thule amid light snow and a temperature of about 3 degrees F. The next flight opportunity is Monday, April 5. 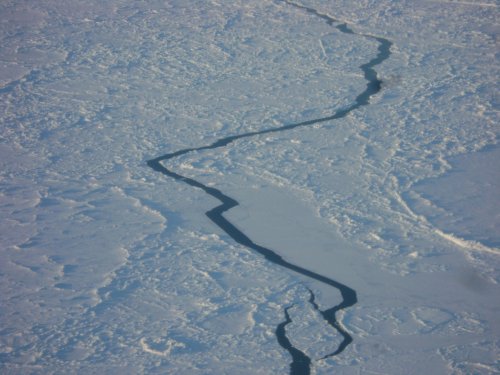 A photo of a part of the NW passage.
Reduced size - full size image at text and image source:
http://www.nasa.gov/mission_pages/icebridge/news/spr10/index.html

The recent excitement about 'Arctic ice recovery' coincided with the red mark I have placed on the graph below. 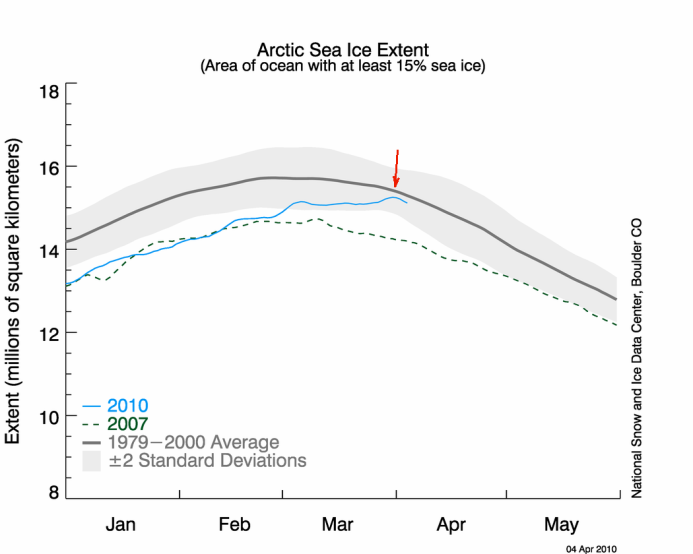 Please note: this is a graph of area with at least 15% sea ice.

The at least 15% ice extent graph is now dipping again.  The ice recovery seems to be mainly in the area of the Bering Straight.  But I suggest that the bit that matters is between Greenland and Iceland, and the Nares Strait.  Both areas have ice cover which is young ice.  In particular, the Nares Strait, normally solidly packed with ice at this time, is showing anomalous behaviour.  With the Strait fully open this year, ice will be driven south by the winds.

Note: giant rafts of old ice would soon choke the Nares Strait, I suggest.  Younger, weaker, smaller fragments would not choke the flow.  Reduced ice cover and thickness must precede any substantial  wind-driven losses.  I further suggest, the fact that such substantial ice loss is wind driven does not mean that the losses cannot be atributed to global warming.

Sea ice flux through the Nares Strait is most active during the fall and early winter, ceases in mid- to late-winter after the formation of ice arches along the strait, and re-commences after breakup in summer.
In 2007, ice arches failed to form. This resulted in the highest outflow of Arctic sea ice in the 13-year record between 1997 and 2009.

The deniersphere has seized on the Kwok et. al. paper to blame wind, not global warming, for the record 2007 ice loss.  This despite the fact that the ice loss through the Nares Strait in 2007 was only about 10% of the total ice losses.


What is the current state of the Nares Strait?

In July 2009 the ice bridge broke up, allowing ice to flow south.  Today, at the start of the melt season there is no ice bridge.  The strait is open, and ice is drifting through it to the south, driven by the prevailing winds. 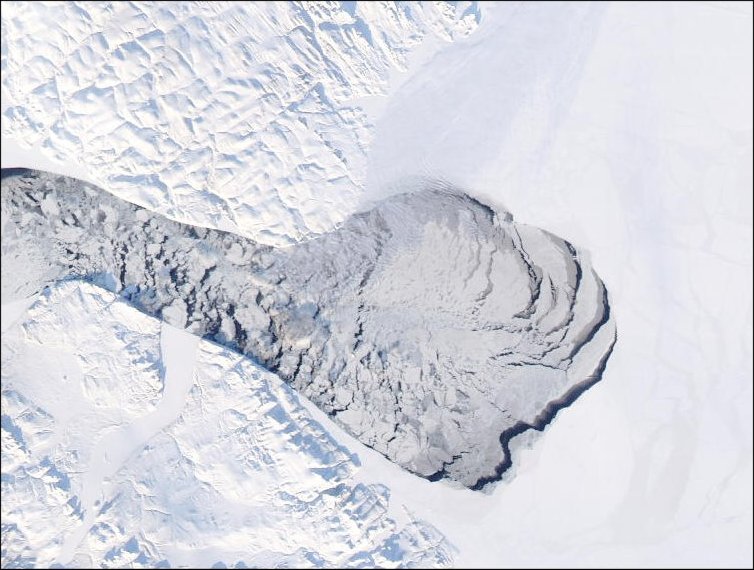 If the Arctic ice melts entirely or substantially that will affect local climates.  It will almost certainly accelerate ice mass losses in Greenland.

Now, ice sheets don't collapse and can't collapse if you believe an article in AIG News, the Australian Institute of Geoscientists Quarterly Newsletter No. 97 August 2009, which purports to state that collapse of the Greenland and Antarctic ice sheets is impossible.  I recently featured that article in A Critique Of A Multiply-Published Article On Ice Sheet Collapse.


In the picture below I have highlighted the wind direction and what I perceive to be areas of frozen-over meltwater.  That is my opinion and is not reflected by the IceBridge team or any member as far as I know. 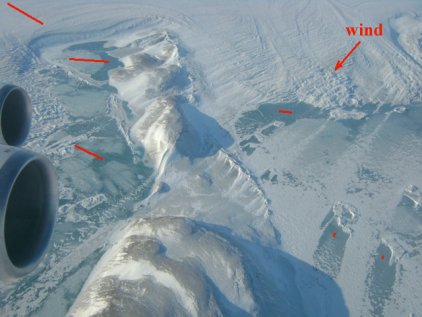 The IceBridge team have recently surveyed the Zachariae and 79 North glaciers in northeast Greenland.  Results are yet to be published.  Ice losses in that area appear to have been accelerating for some years.  But I will leave that topic to another article.

If, as claimed by a handful of people, the Arctic ice is recovering, why are USARC and the Canadian Coast Guard so concerned to have oil spillage response apparatus in place for the North West Passage?


Leakegate: Is that true, or did you read it in the The Times?
http://scienceblogs.com/deltoid/global_warming/leakegate/

Low Solar Activity Won't Slow Climate Change, Study Says
Global Cooling: A Good Story, If Only It Were True.
Global Cooling : Beyond Parochialism
Global Cooling : How Wrong Can You Get?
Himalayan Hype : Reading Between The Lines
A Critique Of A Multiply-Published Article On Ice Sheet Collapse
The Chatter Box
More Articles All Articles
About