The first part - Arctic Ice 2010 #1 - The Nature Of Sea Ice was an introduction to the behaviour of Arctic sea ice.

The second part Arctic Ice 2010 #2 - What People Are Saying discussed current media and blog reports about the state of the Arctic.

This third part describes the state of the Arctic ice as of April 2010.


It is hard for anyone to know what to believe from reports on the web.  Arctic ice shrinking.  Arctic ice melting.  Ice recovering.  Ice free summer 2010.


What does the pre-satellite historical record tell us?

I covered some of the history in part 1, but we need to go further back in time to get a truly historical perspective of today's Arctic ice.

The struggle for the North Pole began nearly one hundred years before the landing of the Pilgrim Fathers at Plymouth Rock, being inaugurated (1527) by that king of many distinctions, Henry VIII of England.
...
In 1588 John Davis rounded Cape Farewell, the southern end of Greenland, and followed the coast for eight hundred miles to Sanderson Hope. He discovered the strait which bears his name, and gained for Great Britain what was then the record for the farthest north, 72° 12´, a point 1128 miles from the geographical North Pole. Scores of hardy navigators, British, French, Dutch, German, Scandinavian, and Russian, followed Davis, all seeking to hew across the Pole the much-coveted short route to China and the Indies.
...
The distinction of being the first to make the Northwest Passage, which Franklin so narrowly missed, fell to Robert McClure (1850-53) and Richard Collinson (1850-55), who commanded the two ships sent north through Bering Strait to search for Franklin. McClure accomplished the passage on foot after losing his ship in the ice in Barrow Strait, but Collinson brought his vessel safely through to England. The Northwest Passage was not again made until Roald Amundsen navigated the tiny Gjoa, a sailing sloop with gasoline engine, from the Atlantic to the Pacific, 1903-06.
...

The Northeast Passage was first achieved in 1878-1879 by Adolph Erik Nordenskjold. Step by step energetic explorers, principally Russian, had been mapping the arctic coasts of Europe and Siberia until practically all the headlands and islands were well defined.

Nordenskjold, whose name was already renowned for important researches in Greenland, Nova Zembla, and northern Asia, in less than two months guided the steam whaler Vega from Tromsoe, Norway, to the most easterly peninsula of Asia. But when barely more than 100 miles from Bering Strait, intervening ice blocked his hopes of passing from the Atlantic to the Pacific in a single season and held him fast for ten months.

In his first north polar expedition, which lasted for four years, 1898-1902, Peary failed to get nearer than 343 miles to the Pole. Each successive year dense packs of ice blocked the passage to the polar ocean, compelling him to make his base approximately 700 miles from the Pole, or 200 miles south of the headquarters of Nares, too great a distance from the Pole to be overcome in one short season.

From the foreword by Gilbert H. Grosvenor.
Robert E. Peary - The North Pole - 1910

The earliest known deliberate attempt at Arctic exploration in search of the Northwest Passage was the John_Rut expedition of 1527.  Due to heavy pack ice the ship had to turn south for Labrador.

The early explorers recorded how the ice extent varied over the course of the year.  There seems to have been a general idea that an expedition could succeed if only 'this year' there was an exceptionally low extent of ice.

Regardless of the route chosen - Atlantic, North Sea, Kara Sea, Bering Straits, Nares Strait, no predictable, repeatable through route could be found via the North West or the North East.  Remember - this is science - if a result isn't repeatable then it is merely anecdotal.

Peary became the first person to take a ship through the Nares Strait, the ship also claiming the record in its day for furthest North.  The Nares Strait is of vital significance to the overall condition of the Arctic. 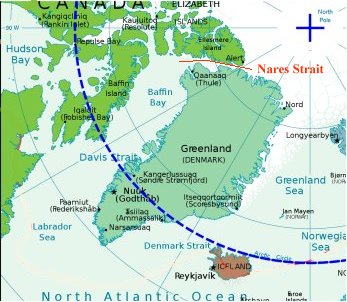 The Nares Strait, until very recently, was blocked annually by an ice bridge at its southern end.  Recently the ice bridge formed roughly in the middle of the Strait.  It then began forming at the Northern end.  The ice bridge failed to completely form in the winter of 2009-2010.

An ice bridge is a mass of consolidated ice which stretches from land to land, with substantial points of attachment to the land.  The ice bridge in the Nares Strait blocks the exit of Arctic ice from the Lincoln Sea.  When the ice bridge forms and the flow of ice ends, the wind, currents and tide may combine to sweep out enough ice into Baffin Bay so as to make the Strait navigable.

'Navigable' is a broad term.  Peary's ship was specially reinforced for that specific journey.  Even so, she suffered much damage from the ice.  Peary only just managed to reach the Lincoln Sea: the Lincoln Sea, more of a large bay, was usually frozen over for most of the year.


What does the satellite record tell us? 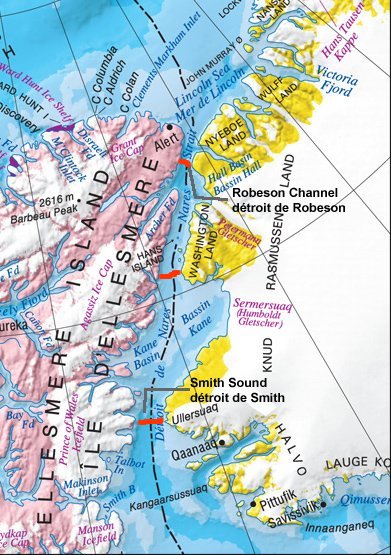 Nares Strait did not consolidate in 2007, allowing for a continuous flow of thick multi-year ice from the Arctic Ocean down to Baffin Bay. It did consolidate in 2008, but further north than normal (with the ice bridge starting at the north end of Kane Basin instead of in Smith Sound). This year, 2009, it hasn't consolidated yet (again). So far (unlike 2007) an ice bridge HAS formed, preventing a flow of Arctic multi-year sea ice into the Strait. But (unlike 2008) it has formed at the far north end of Robeson Channel.

Because of the location of the ice bridge at the north end of Robeson Channel (instead of in the normal position in Smith Sound) and because of the prevailing northerly winds through the Strait, a polynya has formed extending the length of Nares Strait. The winds continuously push newly formed ice southwards, away from the ice bridge, keeping the ice at the north end of the Strait permanently broken and thin. Normally this polynya (the North Open Water or NOW polynya) forms at Smith Sound, with open water first appearing in mid-May to early-June ...
source: ice-glaces.ec.gc.ca/

The flow of ice in 2007 accounted for 10% of the year's Arctic sea-ice loss.  From July 2009 through to the date of this article an area of ice the size of the Lincoln Sea has remained cracked and weakened, with constant movement.  The picture below shows the opening of the Nares polynya into the Lincoln Sea, March 2009, with an image from late June showing a crack in the Petermann Glacier ice tongue. 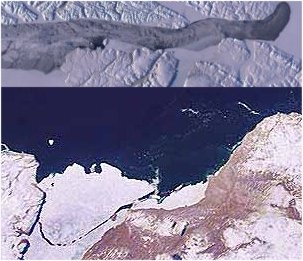 The extension of the polynya into the Lincoln Sea is not of itself unusual.  Peary must have made use of such an opening.  Indeed, he followed an open lead along Ellesmere Island.  Nor is it unusual for an ice tongue to break off: they can't grow forever.

What is unusual and a cause of concern is that not only has the polynya extension failed to consolidate this winter: it has the potential to be much bigger this year.


What do the 2010 satellite records show?

There is currently the remains of a weak ice bridge between the Petermann Glacier area and the Lincoln Sea.  It appears that it would take little melting to dislodge it.  In that event, the broken ice shown in the next pictures would be free to migrate south.  At the moment, pack ice in Baffin Bay forms an obstruction at the South, but that ice usually disperses in summer. 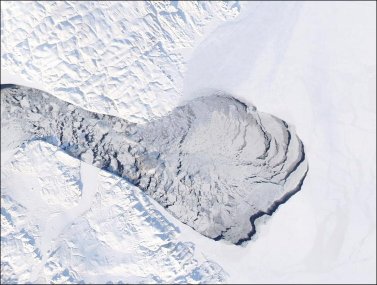 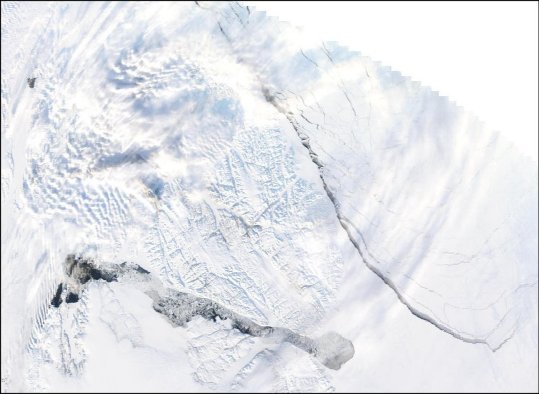 The Arctic ice is in constant motion.  This large crack appeared, widened to about 4 kilometers and then closed as another, wider one opened nearby.  The cracks closed again within about two days.  This is normal behaviour.  The ice-strewn darker waters of the polynya would be normal for late summer.  But this is April.  The bulbous extension into the Lincoln Sea is, to the best of my knowledge and belief, far beyond anything previously recorded or observed.

Judging by satellite images and historic records, judging from many hours of studying almost-live images from rapidfire, judging from the recent decade of Arctic oscillation and ice extent records I have made some broad conclusions.  The maps below serve to illustrate those conclusions. 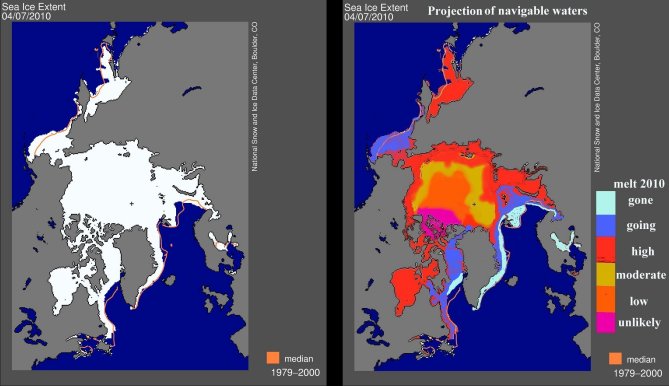 The image to the left shows areas with at least 15% sea ice coverage.  The image to the right shows my estimate of areas likely to become navigable this year, with colors:

If the thickest and oldest land-attached mass opens a lead between ice and lane then this will increase the chances of mass loss overall.

These estimates are not outputs from a computer model or mathematical formula.  They are derived from estimates of historical seasonal ice extent and consolidation.  To the extent that many historical written records are themselves estimates, guesses or wild exaggerations I have tried to allow for that.

Currently the ice is fairly well packed in the Bering Straits area.  Due to cloud cover I have not been able to view the area as much as the Nares Strait area.  My estimate of melt likelihood in that region is thus based on scant visual information.  I will post an update when more data becomes available.

Further, if any data, comes to light invalidating my suggested melt/dispersal patterns then I will add a footnote updating this article.

I conclude that the Arctic will lose more ice this year than in 2007.
I do not wish to be proved right, but I fear that I may.

---------------------------------
Related / further reading:
http://www.sciencemag.org/cgi/content/abstract/315/5818/1529?maxtoshow=&...
Receding Arctic Ice Not The Only Problem - It's Also Thinning
Arctic Sea Ice - Is It Getting Thinner Or Not?
Arctic Literally On Thin Ice
Low Solar Activity Won't Slow Climate Change, Study Says
Global Cooling: A Good Story, If Only It Were True.
Global Cooling : Beyond Parochialism
Global Cooling : How Wrong Can You Get?
Himalayan Hype : Reading Between The Lines
A Critique Of A Multiply-Published Article On Ice Sheet Collapse
Arctic News Or Science Abuse?
The Chatter Box
More Articles All Articles
About