In a few words, most reports are false, and the timidity of men acts as a multiplier of lies and untruths.
Clausewitz

E. coli, or Escherichia coli, was named in 1919 in honor of its discoverer Theodor Escherich a few years after his death.  It is a very common bacterium which is found as a part of the normal gut flora of animals.  There are very many strains only a few of which are likely to cause illness in humans.  Some strains, such as E. coli O104:H4, the strain identified in the current outbreak, release toxins which can cause food poisoning.

Just because the term 'food poisoning' is so widely used it is something of a knee-jerk reaction to assume that an outbreak of E. coli must have originated in food.  In reality, infection can be spread by direct contact or by ingestion of foodstuffs or liquids which have been contaminated.  The contamination originates in fecal matter but may be transmitted through one or more of many channels.  A prime suspect is poor hygiene practices, such as failure to wash the hands both before and during the handling of food.  Contaminated water is another.  Ordinary flies1,2 are too often overlooked as a vector.

Tracing the origin of any outbreak of disease must be performed in a rigorously scientific manner.  A failure to stick to rigorous scientific method can lead to wrong attribution with economic and / or political consequences.  In the current outbreak, at first Spanish cucumbers and then farm produce from a source near Hamburg were blamed.  Perhaps investigators think they will be seen as not doing their jobs if they keep saying they don't know the source of the outbreak.  But "I don't know." is better by far than laying blame where it is later found not to belong.

I am not an epidemiologist.  However, the process of elimination by which the cause of a thing may be found is not exclusive to epidemiology, or indeed any branch of science.  The method can be applied to almost any area where the cause of something must be found.  If your motorbike doesn't run, then you need to seek the help of someone who knows how to eliminate causes in a scientific manner - Matthew B. Crawford for example. 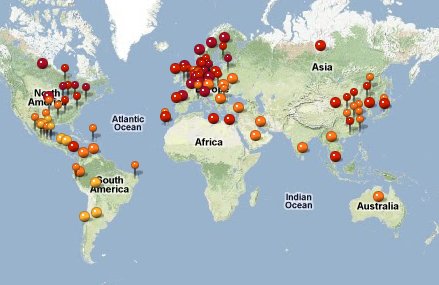 It is most unfortunate that tracing the primary cause of an outbreak requires two conflicting procedures.  Either one must take many early samples from possible sources over a fairly wide geographical area, or one must wait to determine from the spread pattern the narrower geographical area.  The latter course is often the only realistic course for the underfunded scientist.  The geographical spread makes it quite clear that the locus of infection was in a roughly triangular area bounded by Hamburg, Hanover and Lübeck.

The outbreak remains primarily centred in Germany, and investigations continue into both the nature of the unusual enteroaggregative verocytotoxin-producing Escherichia coli (EAggEC VTEC) O104:H4 bacterium, which is causing the outbreak, and its source. 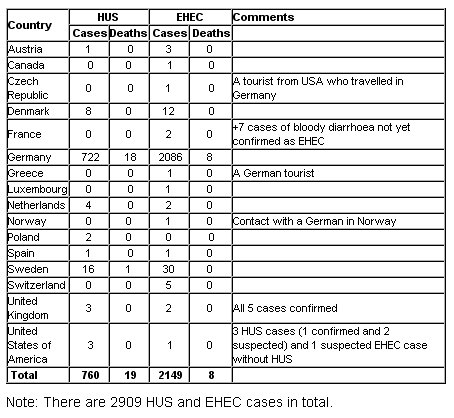 Having determined the general geographical area, the next step is to go through the possible modes of transmission from most likely to least likely.  The E. coli strain appears to be of a form carried mostly in humans.  That makes it highly likely that the infection was spread by direct human contact.  It follows that the first investigations should focus on all places where people gather socially to eat or drink.  That means restaurants, cafes, bars and - oh yes - fairs and festivals.  After that, you should you check water sources and farm produce.  Most particularly you look for fecal contamination.  In the case of farm produce you focus on farming practices such as the use of animal wastes as fertilizer.

After having first blamed Spanish cucumbers, and then an organic farm - Gärtnerhof Bienenbüttel GmbH - which, as a matter of policy, does not use wastes or inorganic fertilizer, the investigators have now turned their attention to a world famous tall ships festival which attracts visitors from around the world every year: the Hafengeburtstag - Hamburg Port Festival.

The media is not to blame this time for merely repeating what was given in press releases.  Any financial losses suffered by vegetable growers and sellers as a result of press releases must be laid at the door of the people who issued the premature press releases.

In my - inexpert - opinion, the source of contamination is likely to be a food outlet close to the port.  It has always been my experience in visiting markets, fairs and festivals that there are never enough toilet facilities for the number of people attending and that a large number of males do not wash their hands after using the toilet.  The solution to that problem lies in our education systems.  Unfortunately, some people will not learn until they have had a trip in an ambulance.

I reiterate: the above is my inexpert opinion.  We may never know exactly where the bacteria came from.  What seems highly probable is that someone somewhere, fearing a massive loss of revenues, deflected attention from the Hamburg Port Festival.  Or is that just me being an inexpert conspiracy theorist?