According to Peter Freuchen, writing of his travels in Siberia, circa 1936,  the tundra coast near Tiksi in the Lena Delta was fringed with logs and the sea bottom contained "hundreds of thousands of years of sawdust".  To the best of my knowledge, this remarkable phenomenon - a Siberian 'sawdust coast' - has never been studied scientifically.

Peter Freuchen was a scientist.  However, for much of his life he was known to various people according to the various talents which make him seem like a character from a work of fiction.

To the general public he was an author, actor, scriptwriter, props maker and Arctic expert.  He wrote the screenplay for the movie Eskimo and as 'props', built an entire village of igloos out of real snow.

To Arctic scientists he was an exploring pioneer.  Together with Knud Rasmussen, in an arduous overland Greenland expedition, Freuchen proved that Peary Land was not an island, but was part of the mainland of Greenland.  The two established a trading post at Cape York and named the location Thule.  The town which they founded was relocated to Qaanaak when Thule Air Base was built.

Peter Freuchen was a hero of WW2.  The gestapo captured him twice and he escaped twice.  He helped many jews escape from the nazis, and he was an important member of the Danish resistance.

He was something of a joker and loved to spin the most outrageous yarns for the benefit of the newspaper reporters that often besieged him.  Perhaps, being a news reporter himself, he knew how to tell them exactly what they wanted to print, true or not.  For all that Peter Freuchen loved to spin yarns for the newspapers, in matters of science he was a trusted source.  And that is why I decided that it was not too much trouble to discover the facts behind his intriguing remarks about driftwood on the coast of the Lena Delta.

I was taken along on a trip [near Tiksi] across the tundra which stretched all the way out to the coast in this region. From the tundra it was usually impossible to reach the water because a wide belt along the shore was covered with piles of old tree trunks. But landing beaches had been cleared by burning a way through the old logs. There was no sand, only a soft mush of sawdust from the constant rubbing of the tree trunks.
...
We moved east [from Tiksi] with a speed of eight miles an hour, since the three ships had to stay together and the slowest set the pace. We had only two inches of water under the keel, but the captain was not worried about running aground again. The bottom was soft all along the coast, padded with hundreds of thousands of years of sawdust.

One might think that 'hundreds of thousands of years of sawdust' would have long since been investigated minutely and that a report would be available somewhere on the internet.  If there is such a report, I have yet to find it.  This article is my attempt to shed some light on a scientific mystery which - as far as I can determine -  is recorded only as a few words in the personal history of an Arctic expert.


Driftwood in the Arctic

In his book about the Jeannette Expedition, In The Lena Delta, George Melville made many references to driftwood on the Arctic coasts.  Driftwood features prominently in his description and sketch of the location where De-Long's boat party landed.  Driftwood is shown prominently in the 16th century Carta Marina of Olaus Magnus.  Ot is shown as floating because at that time it was not realized that the wood was transported to Greenland by sea ice. 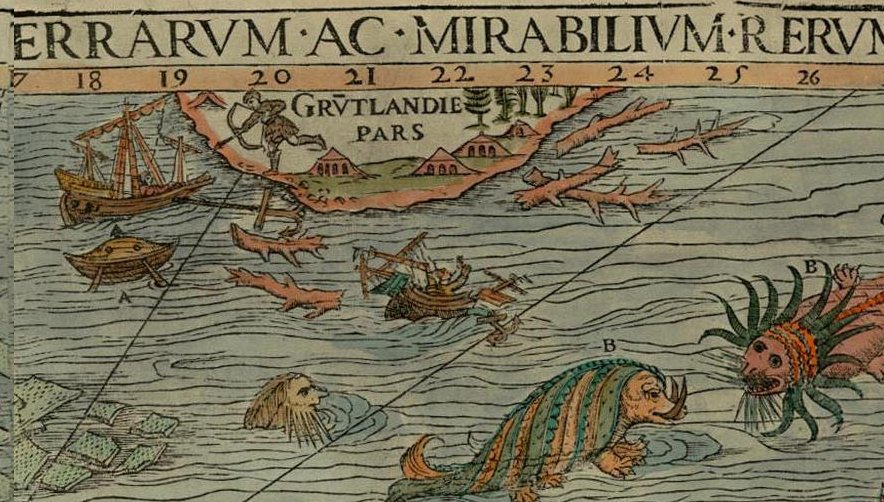 Carta Marina - detail showing driftwood off the coast of Greenland.

One of the factors which led Fridtjof Nansen to embark on the Fram Expedition was knowledge that driftwood found in Greenland originated in the forests of Siberia.

A number of interesting points arise about the voyage of trees from forest to ocean and back to land.  Firstly, it was deduced correctly that wood traveling from Siberia to Greenland was transported by ice, since otherwise the wood would become waterlogged and would sink long before it reached Greenland.  Of course, some of the wood which might otherwise have reached Greenland would be dropped in the sea along the way as ice cracked or melted.  It thus becomes impossible to estimate the amount of wood leaving Siberia by extrapolating the quantity of wood found elsewhere in the Arctic.  Instead, we must examine the mechanisms by which trees end up in the Arctic seas.

Although Siberia is commonly thought of as a cold and hostile place, it has its seasons just like any other land in similar latitudes.  As the northern hemisphere warms up in spring and summer, the many Siberian rivers that were icebound through the winter begin to flush their ice into the Arctic seas.  It often happens that an ice-jam dams a river until the melting ice gives way under the pressure of the impounded water.  In the absence of human intervention, the sudden release of pent up waters causes a wave to roll towards the sea, carrying ice, sediments and debris along with it over the top of low lying land.  Islands in the Lena Delta would often be flooded from that cause.  It is easy to see that deep and fast flood waters could easily uproot or snap off trees and carry them over areas which normally were very shallow water and into the sea.

The trees would be carried away into the sea, become waterlogged and sink, but for the Arctic sea ice.  Washed to the edge of the sea by floods, the trees would be mostly held back from deep waters by the ice.  Waterlogged wood tends not to be moved far by incoming and outgoing tides.  The constant rubbing and clashing of tree against tree due to tidal action would produce trunks neatly stripped of side branches, especially so in the case of trees such as pines with straight trunks.  The net effect of a sequence of tides is to produce a tide line of bare tree trunks and stripped branches. 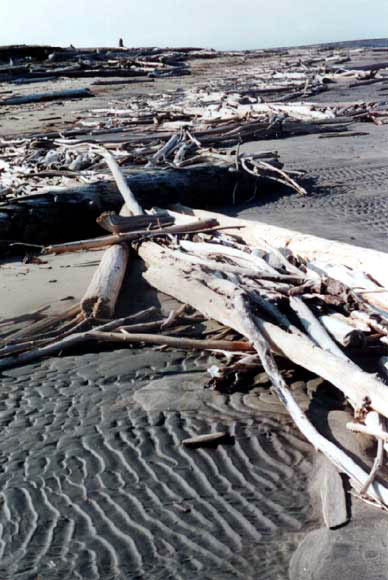 With the constant rubbing of wood against wood for as long as the tide is running, it is to be expected that at least some of the wood would be converted to sawdust during summer.  As the ice builds up in the winter it pushes against the coast and against the stranded wood.  Most of the wood will be pushed back inland and only a little of it will likely be carried onto the ice.  Of that amount again, only a little of it will be shoved onto the ice and end up stranded on foreign shores.

Long before the establishment of industrial-scale logging in Siberia, nature was almost certainly dumping logs into the seas around the Lena Delta.  Given the commercial value of timber it is likely that loggers would not idly let the river carry away to waste the products of their hard labors.  Although industry has been blamed for the large quantities of timber found on the sea floor at Tiksi Sea Port, it seems to me more probable that most of it was a product of natural processes.

In the quote above, Peter Freuchen mentions 'hundreds of thousands of years' of sawdust building.  This is entirely feasible.  Siberia was not covered in ice during the most recent glacial periods.  During all that time it is likely that trees were washed to the coasts where they were ground down over the years.  Layers of sediments containing a high proportion of ground up wood may well be expected to be found dating back to before the age of mammoths.

Wherever there are trees near water there is a chance of finding wood remnants in sediments from that source of water.  One does not need to search far to find mention of wood in sediments within scientific papers.  However, in the specific case of the sea coast of the Lena Delta I have found nothing other than Peter Freuchen's passing remarks.  It is only by chance that the sawdust sediments were noted by that scientist and became - to me - an Arctic 'history mystery'.

If sawdust-laden sediments have indeed been laid down over hundreds of thousands of years in the Lena Delta area then that would surely be a matter worthy of scientific study: we could learn much of the history of the Siberian climate.  But the Lena sediments do not feature in climate science literature, and that - to me - is the real mystery.

History Mysteries #1 - Who Shot The Tomatoes?
History, Science And The TMT Boundary
Cleanup of the Bay of Tiksi Seafloor from Sunken Logs and Shipwrecks Pilot Project
The ChatterBox Arctic Index

[*] - copyright - fair use claimed for promoting the originator's works.
The Chatter Box
More Articles All Articles
About