"Words are to the Anthropologist what rolled pebbles are to the Geologist — battered relics of past ages often containing within them indelible records capable of intelligent interpretation..."
John Herschel

While investigating the mystery of The Sawdust Coast, I came across another mystery: the Raft of Atchefalaya.  Just as Peter Freuchen's autobiography was my first hint of sawdust in the Lena Delta sediments, so also John Herschel's 1875 book Physical Geography of the Globe was my first hint of trees forming substantial land masses in the Mississippi Delta.

... the deltas of the Mississippi and the Lena carry out the rivers to great distances, and form very projecting points; that of the Mississippi, in particular, which is singularly ramified, and in which the main channel prolongs itself, on land of its own formation, like the claw of some web-footed bird, far into the Gulf of Mexico, being increased by immense quantities of drifted trees, which meet together, and forming a floating mass - the "Raft of Atchefalaya," which, in 1816, contained upwards of 250,000,000 cubic feet of timber, accumulated, in consequence of some local obstruction, in only 38 years, and has been increasing ever since.
...
It is therefore no sluggish river, but in many parts of its course, a torrent, against which steamers with difficulty make head, and which rushes down laden with drift timber from the (yearly disappearing) forest, of the vast alluvial region it traverses, cutting down timber laden banks (whose section discloses the forest growth and destruction of thousands of years - Lyell), and carrying all out to sea in a delta of unexampled extent.

In the Lena Delta, sea ice can keep much timber from being dispersed.  It therefore tends to form a sort of tideline in which the constant grinding of wood against wood reduces the driftwood to sawdust.  In the Gulf of Mexico, the Gulf at large is not and never has been - to my knowledge - noted for large volumes of driftwood.  In the absence of ice, the dispersal in the sea of trees carried down by a river can be prevented by shallow water or some form of underwater obstruction.  That appears to have been the case historically in the Mississippi Delta: trees would snag on the bottom in shallow waters, trap sediments and form new land.

Conformation of this geological process in the Mississippi Delta comes from a very surprising source: the records of an English court.  The court is the High Court of the Admiralty, the date is November 20, 1805, and the context is the capture of a Spanish ship by an English privateer.  The legality of that capture was challenged by America.  The question to be answered by the court in the determination of legality was whether or not the islands formed from trees constituted sovereign territory within the United States.

Thus, some useful observations on the creation of new land from 'natural logjams' - a matter of interest in the science of geology - have come to light in the annals of law.  It seems that there is almost no kind of written matter which does not contain something of use to science. 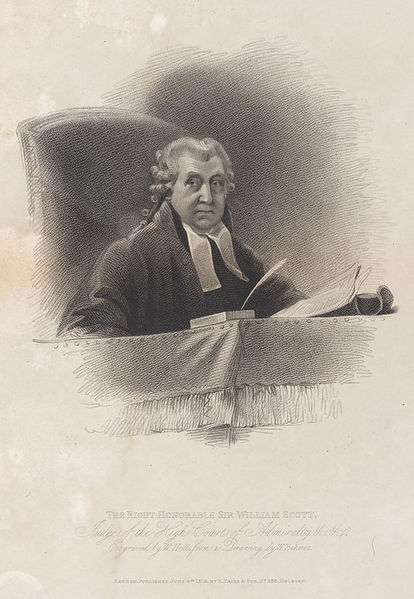 Sir William Scott (Lord Stowell), who tried this case and made some very astute observations on the relevant geological processes, was a major figure in the evolution of international maritime law.

Sir William Scott served 30 years as judge of the High Court of Admiralty. Much of his term in office involved naval prize law. During his time the strength of a nation’s navy directly impacted their place in the world. Britain’s dominance of the sea, and the fortunes brought by the prize system, made Lord Stowell's decisions that much more significant. Stowell adjudicated in many of the most spectacular prize award cases involving the capture of vessels in time of war. He wrote down his judgements and as a result much detail remains of the process by which prizes were assigned. Most of the judgements of Lord Stowell were confirmed on appeal, testimony to his sound and thorough judicial reasoning. His impact on maritime and international law is still felt today in the law of both England and the United States.

The full report of the court case is taken verbatim from the American&Commercial Daily Advertiser Apr 2, 1806.  The newspaper's preamble is omitted.  It should be noted that the 'courts of Vice-Admiralty' mentioned below were courts set up with the specific purpose of trying maritime cases as close as possible to the region in which the legal dispute arose - in the matter of legal venue, prima facie the ship La Anna should not have been taken to England.

Note: the date is printed - wrongly - as 8th January 1106 in the original.  Ampersands in the original have been changed to 'and' to avoid conflicts with some html browsers.


And so it comes to light that a record which forms part of the case law of the English legal system is also a record of the observation of a most unusual geological process - the forming of land from naturally rafted trees and sediments.
The Chatter Box
More Articles All Articles
About