Hank Campbell
If you are reading media claims about President Trump and the Waters of the United States, they are using terms like "unprecedented" and "sabotage" regarding rollback of some 2015 Obama restrictions that environmentalists had lobbied for and won.

Yet these new regulations never took effect, so how can it be sabotaging us?

Were we really in danger and only a set of regulations never enacted would save us? Are close-ups of frogs in pea-soup-looking water (obviously to evoke images of chemical sludge for readers who may have never seen a frog in a pond) real or fake news? 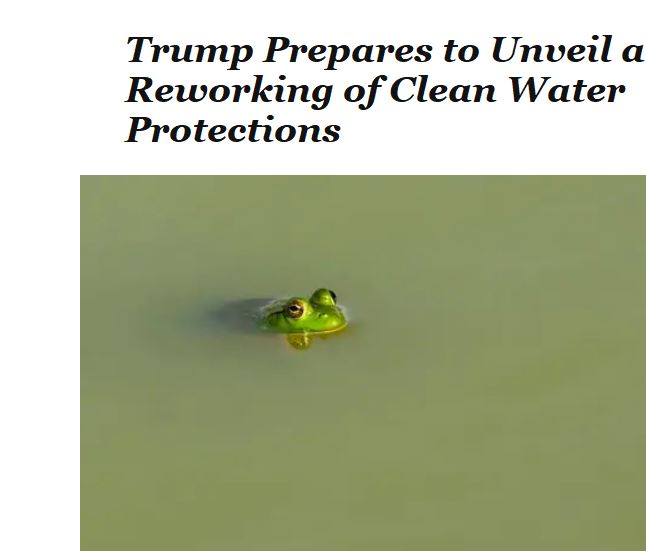 Zoomed in to remove context, this looks like toxic sludge. It's what frogs want to live in. Stop your pool filter from running for two weeks and frogs will also want to move in. Fair use screen capture to report on media. Credit: Education Images/UIG, via Getty Images

What is WOTUS? Why was it needed?

In late 1972, President Richard Nixon signed the Clean Water Act (33 U.S.C. §1251 et seq.), which augmented The Federal Water Pollution Control Act of 1948. The 1972 regulation made it a federal crime to discharge pollution into "navigable waters." Three months later states and the federal government already had rules in place, showing this was a well-coordinated plan.

Contrast that to the 2015 rule, which has not taken affect because of lawsuits. Are we to believe that in 2015 farmers, states, and corporations cared less about pollution than in 1972? So much so they filed lawsuits across the nation? Or was this over-reach by a federal agency chosen because it was exempt from courts and Congress? More on that below.

That term "navigable waters" is important because the Obama administration, using his Environmental Protection Agency, dramatically changed the definition with Waters of the United States.  With this rule, the Obama administration was suddenly able to tell farmers what crops they could plant, what crop protection products they could use, and a whole lot more, because it changed the definition of navigable waters.(1) All they had to do was show any traces of a chemical from a farm could eventually reach a body of water under federal protection. And since the 1990s we have literally been able "to detect anything in anything" so farmers were going to be prime targets for environmental trial lawyers once again.

The process was all legal even if the goal was not. In 1984 the Supreme Court gave  environmental trial lawyers a huge win; it ruled that a government agency could interpret a statute it created, even at the request of a President bypassing Congress, and the courts would "defer" to them. That Supreme Court ruling paved the way for our modern "secret science" and "sue and settle" cultures at EPA and other agencies.

Water of the United States was never enacted, so how can a rollback be harming us?

The New York Times and other political outlets are outraged that Trump's EPA is rolling back the Obama EPA rule called Waters of the United States (WOTUS). "The Obama rule, developed jointly by the E.P.A. and the Army Corps of Engineers under the authority of the 1972 Clean Water Act, was designed to limit pollution in about 60 percent of the nation’s bodies of water, protecting sources of drinking water for about a third of the United States. It extended existing federal authority to limit pollution in large bodies of water, like the Chesapeake Bay and Puget Sound, to smaller bodies that drain into them, such as tributaries, streams and wetlands."

Or a pond on a farm. Or a stream. The definition of a navigable water was so broad it could mean anything.  This is not about heavy industry dumping sludge into rivers, this is farmers growing corn. And they were suddenly going to be faced with reams of paperwork to grow crops. The same crops which were not harming Chesapeake Bay, Puget Sound, or anything else, using crop protection products deemed safe by the same EPA.

That is why, unlike the Clean Water Act, farmers and lawyers representing everyone who owned land with water on it in the United States filed lawsuits. Federal courts agreed and implementation remains blocked in 28 states. Farmers overwhelmingly voted for President Trump and rolling back WOTUS was a campaign promise.

Contrary to framing by corporate journalists who may never have seen a hoe outside an image made by their art departments, this revision by EPA and the Army Corps of Engineers will simply make WOTUS easier to understand. It is not creating a free-for-all for polluters. The first revision was so broad it was clearly lawsuit bait. That can't have been an accident. The Obama administration had already allowed Sierra Club to write its documents and his own (bold mine) U.S. Government Accountability Office found that EPA "violated publicity or propaganda and anti-lobbying provisions contained in appropriations acts with its use of certain social media platforms in association with its "Waters of the United States" (WOTUS) rulemaking in fiscal years 2014 and 2015."

Since the 2015 regulation covered land areas that only temporarily hold water, and both “tributary” and “adjacent” were so vague that ditches or low areas on land could be deemed “waters of the U.S” and targets for trial lawyers, it was going to bankrupt farmers and other landowners.

If you don't think that will happen, look at California, where the Prop 65 rule was likewise too broad but lawyers insisted they would never abuse it. And then immediately did.

In 1984, a six-person majority on the Supreme Court determined that a government agency, in this case EPA, tasked with enforcing a statute determined by law, could do a self-interpretation unless Congress had specifically ruled on an issue - and the courts had nothing to say about it.

WOTUS was never going to survive in the Supreme Court. Justice Gorsuch, on a lower court, wrote, "That's a problem for the judiciary. And it is a problem for the people whose liberties may now be impaired not by an independent decisionmaker seeking to declare the law's meaning as fairly as possible — the decisionmaker promised to them by law — but by an avowedly politicized administrative agent seeking to pursue whatever policy whim may rule the day."

There is no reason to think Justice Kavanaugh would be blind to the problems caused by the 1984 decision, made at a time when, just like Prop 65 in California, people believed no one would exploit a loophole so greedily.

(1) In the 1990s, the Army Corps of Engineers wanted to fix the levees along the Mississippi Delta and President Clinton denied them at the request of environmentalists who didn't want any expansion due to the impact. When Hurricane Katrina hit in 2005, the levees Army Corps of Engineers wanted to fix were of little help, and environmentalists then blamed...Clinton's successor, President George W. Bush.
Science 2.0
More Articles All Articles
About